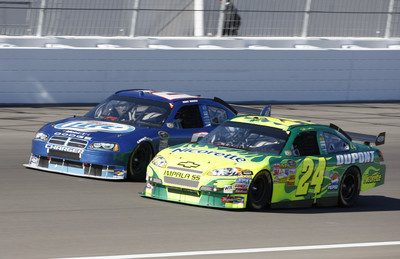 Four-time Sprint Cup Series champion Jeff Gordon found a flaw in the energy-absorbing guardwall system at Las Vegas Motor Speedway and fortunately he was able to complain about it.

Gordon was running third in Sunday’s UAW-Dodge 400 when his car drifted into the one driven by Matt Kenseth, who was second behind eventual winner Carl Edwards.

Both spun, but Gordon’s No. 24 Hendrick Motorsports Chevrolet shot down the track and crashed into an abutment at an opening of the inside guardwall on the back stretch.

The impact destroyed his race car and detached its radiator, causing a nearly 18-minute stoppage.

"I’m really disappointed right now in this speedway for not having a soft wall back there, and even being able to get to that part of the wall," Gordon said of the SAFER Barrier guardwall structure used at all tracks on the NASCAR circuit. "That kind of hit shouldn’t happen. It’s just uncalled for. There’s no reason why any track should have that (kind of opening)."

The opening is for access to the track for safety equipment.

Speedway spokesman Jeff Motley said an evaluation of the crash and section of the track will begin today.

"We’re going to work with NASCAR as we’ve done since the entire SAFER Barrier program began," Motley said. "We’ll do whatever NASCAR recommends we do."

"They need to continue to put SAFER Barriers on the inside of these walls," said Greg Biffle, who finished third but was fifth at the time of Gordon’s crash. "It’s got to be done everywhere."

NASCAR spokesman Ramsey Poston said Dean Sicking of the University of Nebraska, who designed the barriers, will be consulted. SAFER stands for Steel and Foam Energy Reduction.

"If there a recommendation we’ll take action," Poston said. "We will always err on the side of safety."

He also had to go to a back-up car to replace the one he crashed Friday.

"It’s a good start for us," he said of his third straight top-10 finish for Gillett Evernham Motorsports.

Busch, 22, finished 11th after leading 57 laps and fell to second in the driver standings, 21 points behind Edwards.

"We started out good and fell a little bit behind with track position," he said. "Then we finally had a leak in the left-rear tire and had to come in and put four tires on it. We lost all of our track position and couldn’t fight back."

• HARD HITS — Tony Stewart emerged from his No. 20 car favoring his right foot after a crash on lap 108.

Stewart’s right front tire blew, and he belted the wall in Turn 3, leaving him hobbled after aggravating an injury to his right foot from a crash in Saturday’s Nationwide race.

"Yesterday I just hit my right foot on the pedals because I hit (the wall) with the left side (of the car). It just bruised it."

He finished 43rd in the Cup race and fell to 12th in points.

• TESTING, TESTING — The Cup teams will test at Phoenix International Raceway today before heading east for next Sunday’s race at Atlanta Motor Speedway.