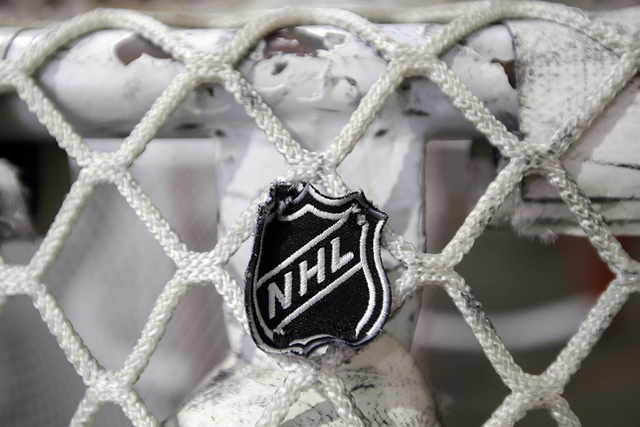 Billionaire title insurance businessman Bill Foley, who is part of an ownership group seeking a National Hockey League franchise in Las Vegas, said Tuesday he hopes to launch a ticket drive in February as the first step toward showing the NHL that Las Vegas is a viable market. (AP Photo/Mark Humphrey file)

What happens in Vegas stays in Vegas.

A potential ownership group headed by billionaire businessman William Foley and the Maloof family is hoping to generate local interest in a Las Vegas NHL franchise. If that happens, they are hoping the NHL decides to stay in Las Vegas.

That process begins Tuesday, when Foley and his people sit down in a meeting with NHL commissioner Gary Bettman’s people to hammer out the details of a Board-of-Governors-approved request to conduct a season-ticket drive — tentatively scheduled to begin in early February.

“I came up with the idea in conjunction with the commissioner to let us do a ticket drive to demonstrate the viability of the market,” Foley said Thursday in a phone interview with The Sports Xchange. “The definition of what that ticket drive will entail, we will define that next week.”

So what is it about the Las Vegas market that has piqued the NHL’s interest?

“It’s a relatively big market with good local and resident demographics,” NHL deputy commissioner Bill Daly said in an email to The Sports Xchange. “But it’s also a unique market making it difficult to make business projections with any material degree of confidence.”

With about 2.2 million residents, Las Vegas isn’t just a tourist destination. It has a local base to draw from. But there is a lot of competition for their entertainment dollars, from casinos to shows to other live events. That is what the NHL is unsure of. How it can quantify how many entertainment dollars it can pull from the local scene in a city rich in entertainment options?

“I think Vegas is a sports town,” Foley said. “That’s our job to prove it and we need to prove it with this ticket drive.”

Daly went on to say that while it is too premature to answer the questions of benefits or drawbacks, Las Vegas is “unlike, in many respects, any other market we are currently operating in.”

What is so unique about Las Vegas as a sports market?

For starters, it is the gambling mecca of the world with casinos and legalized sports books presenting a challenge the league hasn’t dealt with before.

“If we ever get to the point of actively evaluating a franchise opportunity in Las Vegas, we will have to consider what the legalized sports betting means, and how we want to deal with it,” Daly said in the email exchange. “We haven’t gotten to that point yet.”

Foley downplayed the gambling aspect while also offering a potential way to deal with the issue.

“I would think our games would be left out of the sports books,” Foley said. “But gambling is pretty pervasive throughout North America, whether it’s football or basketball or baseball. People are in pools in fantasy football and hockey. It’s happening. We just happen to be in Las Vegas where it’s legal and you can go to a sports book.

“I know the league will have some input and they’ll tell us what we need to do relative to ensuring they are happy with the structure in terms of being in a state that allows gambling.”

Another issue is Las Vegas is not known as a hockey market, and roughly five hours Southeast in Glendale, Ariz., is another NHL franchise in a “non-hockey” market that has struggled for viability since moving there from Winnipeg, Manitoba in 1996.

“I do believe the Phoenix market, in Glendale where (the Coyotes) play, is a little bit out of the mainstream of where you get hockey traffic,” Foley said. “I feel like by moving over to Glendale, they went away from their strong roots and the strong base that they might have had in Scottsdale, North Phoenix, Tempe and so on. They are a little bit out there.

“On the other hand, we are going to have a real state-of-the-art arena being built by MGM and (Anschutz Entertainment Group) between New York-New York and the Monte Carlo about 200 yards off the strip.”

The privately funded arena is one of the biggest advantages the group headed by Foley has going for it. It will seat roughly 17,500 fans for hockey and is currently under construction and scheduled to open in late April or early May of 2016.

“It is a fantastic arena that is well located,” Foley said.

MGM and AEG will make money whether a professional team plays there or not, with roughly 140 nights a year of concerts, fights, professional bull riding and those kinds of events expected to use the venue. As Foley said, “MGM and AEG want to have a team in this arena but the arena is very viable without a team.”

With a venue in place and assuming the gambling aspect can be worked out, it comes back to the group showing it has the local support.

“We really feel like we are going to have a successful program if it comes to pass with filling that arena every hockey night with a strong, loyal fan base in Las Vegas,” Foley said.

And that starts with the ticket drive, which could make or break the venture.

“The proof is going to be in the pudding,” Foley said. “Can we generate the interest of a Las Vegas franchise with this ticket drive? I believe we will be able to, I’m very confident of it. But if we can’t, then the league is going to be correct in saying Las Vegas isn’t ready for this team. And we all, me in particular, will have saved a lot of money.

“If we prove the viability of Las Vegas, I’m confident the league will make the right decision.