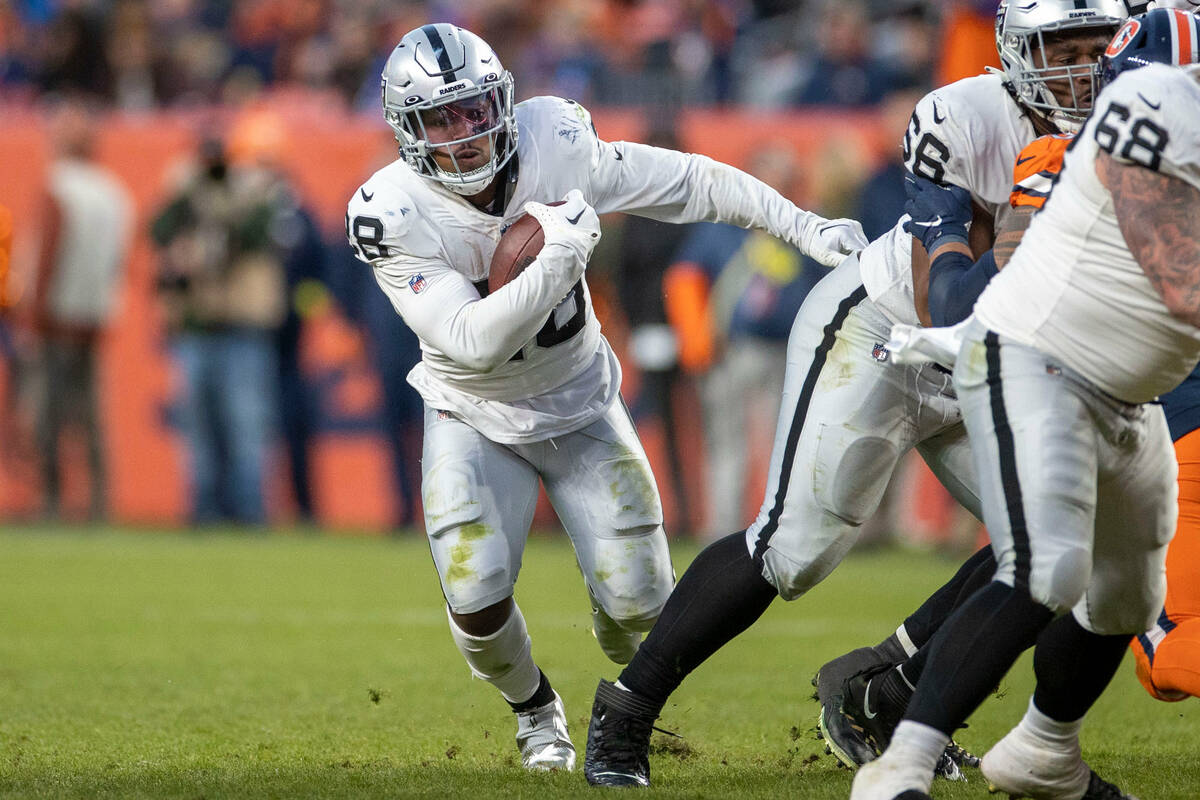 Raiders running back Josh Jacobs (28) runs with the football during the second half of an NFL game against the Denver Broncos at Empower Field at Mile High Stadium on Sunday, Nov. 20, 2022, in Denver. (Heidi Fang/Las Vegas Review-Journal) @HeidiFang

Raiders running back Josh Jacobs was a late addition to the injury report this week and is officially questionable for Sunday’s game against the Seahawks in Seattle.

Jacobs, who was the only player to record a rushing attempt for the Raiders last week, was not listed on the report Wednesday or Thursday. He was a limited participant in Friday’s practice.

The inclusion of a calf injury on Friday’s final report of the week suggests it is a new issue.

Jacobs has 930 yards on 183 carries this season. The rest of the team’s running backs have combined for just 16 carries all season.

If he is unable to go, the Raiders could turn to rookies Zamir White and Brittain Brown.

White, a fourth-round pick out of Georgia, has just eight carries on the season. He was inactive last week for the first time after seeing action in each of the first nine games. Brown has played on special teams the last two weeks, but has yet to play an offensive snap.

“They certainly obviously could benefit from action in the games,” coach Josh McDaniels said about White and Brown on Wednesday, before there was any indication Jacobs was injured. “I’m having a hard time going away from the guy with the hot hand. So, it is what it is. I’m very happy with the guys behind. They’re working really hard, and again, that’s kind of the nature of the position honestly.”

Veterans Brandon Bolden and Ameer Abdullah are also options in the backfield.

Miller missed last week, but was able to get in three limited practice sessions this week.

“We’re probably about as healthy as I could imagine at this point in time during the season, knock on wood,” McDaniels said. “To come off of a few physical games here, I feel fortunate that we’re in the position that we’re in. Those guys I think are trending in the right direction here, and hopeful that we’ll be able to turn the corner here.”

Rookie Thayer Munford took all 66 offensive snaps at right tackle last week with Jermaine Eluemunor flipping over to the left side in place of Miller. Munford said the experience was valuable, and he will be ready to go if called on again.

Munford has seen action in all 10 games, but hadn’t played a full complement of snaps since Week 3 against the Titans.

“I thought it went pretty well,” the Ohio State product said. “I definitely got to see some things I still need to work on and I gave up a sack, but I think I had a pretty strong game compared to the first one.

“It’s very important as a lineman to get that rhythm. If you’re in and out, you can get out of your mojo. So last week was pretty good for that.”

It’s unlikely Sunday’s game will be as memorable for Duron Harmon as his first game against the Seahawks.

Harmon was a second-year safety for the Patriots when they won the Super Bowl on Malcolm Butler’s interception at the goal line in 2014.

Two plays earlier, he leaped over Jermaine Kearse, who then had the ball fall on top of him for one of the most memorable catches in NFL history.

“That was just a roller coaster of emotions,” Harmon recalled Friday. “From being a kid and jumping over Kearse and not knocking the ball down to Malcolm Butler making a great play. That was wild.”

Harmon and the rest of the defensive backs have had some help with the scouting report on the current Seahawks from cornerback Sidney Jones, who signed with the Raiders after he was cut by Seattle earlier this month.

“He’s been really good,” Harmon said. “He’s such a smart player and he told us what he knew about the receivers. He was really able to let us know what to expect from them.”

As for what Harmon anticipates coach Pete Carroll calling should the Seahawks have the ball at the goal line as they did when the Seahawks famously threw the game-clinching interception in the Super Bowl, he’s prepared for anything.

No decision on Hobbs

Raiders coach Josh McDaniels did not commit on whether cornerback Nate Hobbs would be activated for Sunday’s game.

Hobbs is still trying to work his way back from a broken hand suffered in Week 5 against the Chiefs, and now the process has been complicated by an illness.

“We’ll see how it goes,” McDaniels said Friday. “I think we’re kind of in the wait-and-see mode just to see how he’s feeling and how today goes. And then I don’t want to say hopeful or not hopeful, but the reality is, if we feel like he’s ready to go and able to perform at the level we want him to and he wants to, then I think we’re getting close.”

The team opened a 21-day window to decide on whether to activate Hobbs when he returned to practice this week.