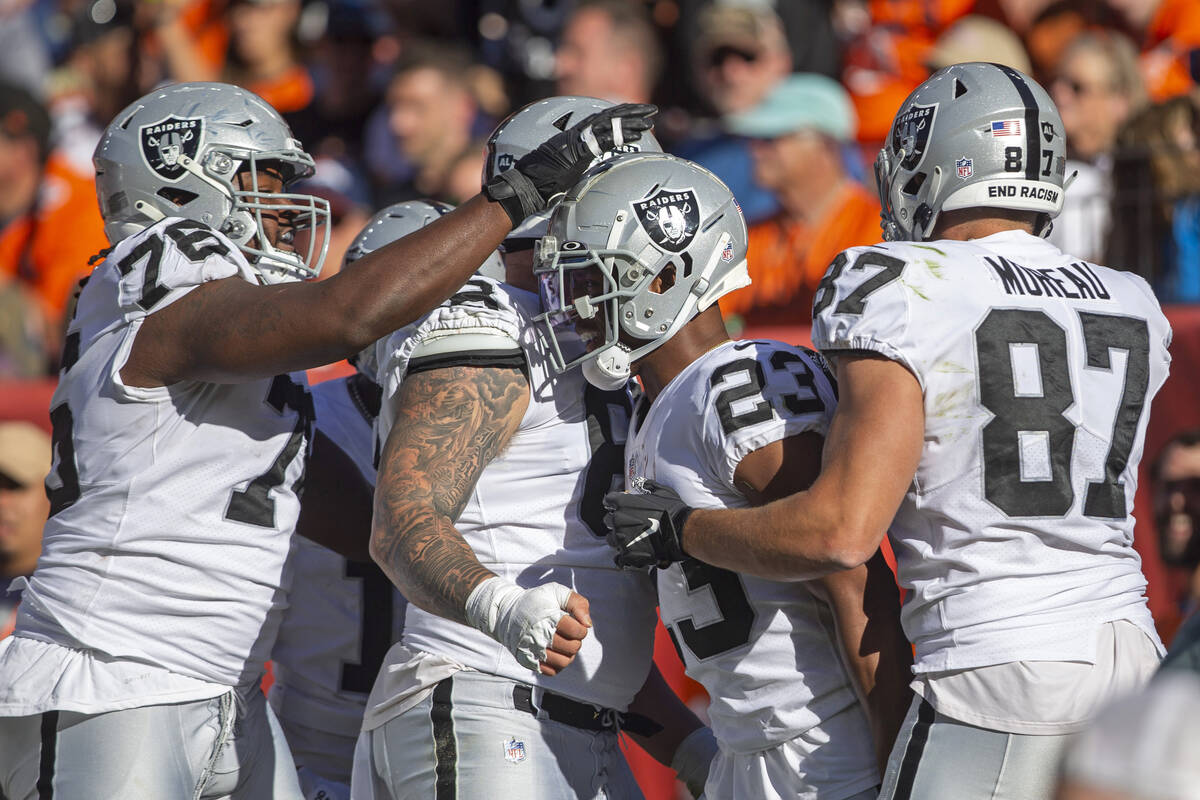 The touchdown on which the Raiders blew the lead wide open against the Denver Broncos on Sunday wasn’t a particularly fancy or creative play. Facing a second-and-seven from the Broncos’ 18-yard line, Derek Carr handed the ball to running back Kenyan Drake, who was operating out of a single-back set.

Standard stuff these days in the NFL.

It was the efficient execution of the play that stood out. Particularly for a Raiders team that has struggled to find consistency and production along an offensive line dealing with the learning curve of a rebuild and two big injuries to start the season.

That play, which resulted in an 18-yard touchdown run, gives the Raiders hope that their offensive line can mature and develop and become the asset they hoped it would be coming into the season.

That all remains to be seen, of course. But for one week, anyway, the Raiders’ offensive line took a big step forward.

“I thought they did a great job. I think we had two sacks, but … it wasn’t on them. Especially against that front,” Carr said. “If we keep that up, hopefully we can build on that.”

Meanwhile, the Raiders did just enough in the run game to force the Broncos to honor it, which they took advantage of by utilizing the play-action pass more than they have all season.

The run game was on full display on Drake’s touchdown run.

Running to the right — or away from the power on the left side, where tight end Darren Waller is flanked left tackle Kolton Miller — Drake flowed toward rookie Alex Leatherwood, who was making his second start at right guard, and Brandon Parker, who had replaced Leatherwood at right tackle the week before.

Drake made a perfect read and leaned left, behind the wall created by Parker, Leatherwood and James, to find daylight. Thanks to a perfect block by Raiders wide receiver Hunter Renfrow to erase hard-charging Denver safety Justin Simmons, Drake was able to sprint untouched to the end zone for the touchdown to give the Raiders a 24-7 lead.

None of it happens without James, Leatherwood and Parker doing their jobs. And this wasn’t a one-play deal. According to Pro Football Focus, the Raiders’ offensive line created an average of 1.6 yards before contact on the Raiders’ 23 rushing attempts. Far too often this season, Raiders running backs have been met behind the line of scrimmage or at it by opposing tacklers.

Left guard John Simpson, Leatherwood and Parker all achieved their highest per game PFF grade of the season.

It wasn’t a perfect or great game by any measure, but it was by far the Raiders’ best effort of the season. After trading veterans Rodney Hudson (center) and Gabe Jackson (guard) in salary-cap moves, the Raiders understood there would be a development process.

That was compounded when starting guards Richie Incognito and Denzelle Good went down with injuries. Incognito is on injured reserve with a quad injury and hasn’t played a down yet. Good was lost to a season-ending knee injury in the first half of the season opener.

Then, three games in, the Raiders moved Leatherwood to right guard and inserted Parker in his place at tackle to help improve the interior of the line. The positive signs on Sunday could mean this revamped unit is headed in the right direction.

“If you look at the O-line, I think it was one player coming back from last year that was a starter, so we knew it was going to take time for them to come together as a cohesive unit,” Drake said. “It’s a long season, and I feel like they are doing that. I look forward to being behind those guys for the rest of the year.”