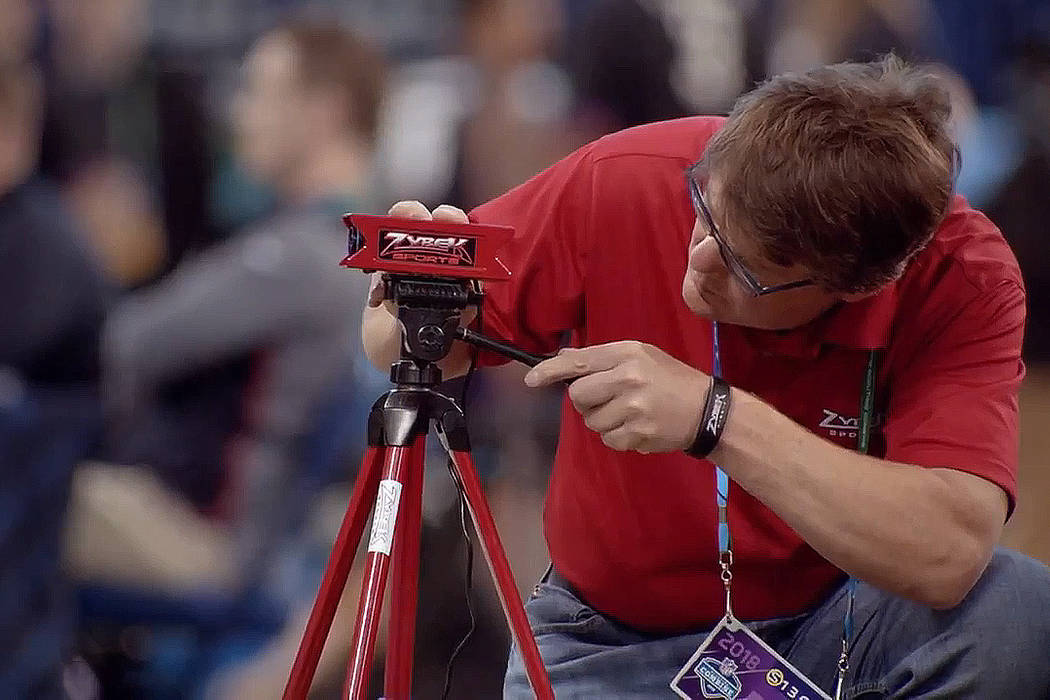 Mike Weinstein, CEO and founder of Zybek Sports, in its ninth year providing electronic timing for the 40 at the combine. (Zybek Sports)

There is no better get-off-my-lawn argument for some when it comes to the NFL scouting combine, no drill more scrutinized, no more compelling an instant for all viewing than when a prospect explodes from a static start.

Come on, man, you’re telling me Deion Sanders ran a 4.3 in 1989, went back for another try, ran a 4.27 and kept on going, sprinting through the tunnel and right out of the stadium?

Sanders is where the combine’s 40-yard dash went from just another metric to urban legend, now the marquee event in Indianapolis when executives and coaches and scouts from all 32 NFL teams have one eye on the guy running and another on a clock.

Used to be, the 40 was timed like a Home Ec teacher might an after-school race of fifth-graders. Stopwatch hanging around the neck and all.

But then the NFL joined the 20th century and began using partial electronic timing in 1999.

And the times kept getting faster and faster.

The combine is again underway at Lucas Oil Stadium, and millions are expected to watch on TV as news conferences and on-field workouts play out over the week.

Nothing gets the juices flowing more.

Mike Weinstein is CEO and founder of Zybek Sports, in its ninth year providing electronic timing at the combine, where three independent systems are used to ensure accurate results.

“We triple verify everything and are totally independent of the NFL,” Weinstein said. “The 40 probably makes too much of an ultimatum on an athlete’s (ability), but the cool thing is, it’s a number and one way for teams to separate athletes from many other factors.

The event remains hand started and automatically stopped — the clock begins when the athlete does — meaning there is no reaction time like in the Olympics.

Meaning an exact time to the triple decimal is incredibly difficult to calculate.

Just understand that these dudes are really fast, and yet you still have some who don’t believe the times at all.

And that’s something I can’t believe.

Why is it that, when it comes to the 40, so many want to dismiss the whole idea about bigger, faster, stronger, about changes in the characteristics of a species over several generations while relying on the process of natural selection?

Yeah. Evolution plays an important part in this, too.

We’re probably a few years away from a smartphone not only ordering our takeout but also cooking the stuff itself. Our flat screens do everything except walk from room to room.

So how can we embrace and have complete faith and trust in such technology continuing to advance but not in athletes running faster than those who came before?

I don’t know for certain if Sanders ran a 4.3 and 4.27 in a matter of minutes, or if Bo Jackson really posted the 4.13 he claimed or if then-Texas Tech player Jakeem Grant was really hand-timed by a Saints scout at 4.10 in 2016.

I’m also not going to disbelieve all of it.

Humans are capable of extraordinary things.

I do know Olympic star Usain Bolt ran 4.22 in running shoes and a tracksuit at a promotional event for the Super Bowl in Atlanta. I was there.

Football began relying on the metric as a way to compare those on special teams, given 40 yards is close to the net average for the length of a punt and the time it takes to reach that distance. The faster you are, the better you can cover kicks.

To this day, Johnson doesn’t believe the time credited Ross, having suggested the NFL wanted to add some excitement to the combine and thus awarded him the record.

The guy in charge of timing disagrees.

“I stand by the (Ross time),” Weinstein said. “He trained really hard to be the fastest athlete there. That time is totally accurate. I think it’s hard for people to appreciate the difference between 4.22 and 4.24, but an athlete making minor adjustments in how he actually runs the 40 can easily make up (the difference).”

It’s all semantics, so just know that these guys are absolutely flying in 2019.