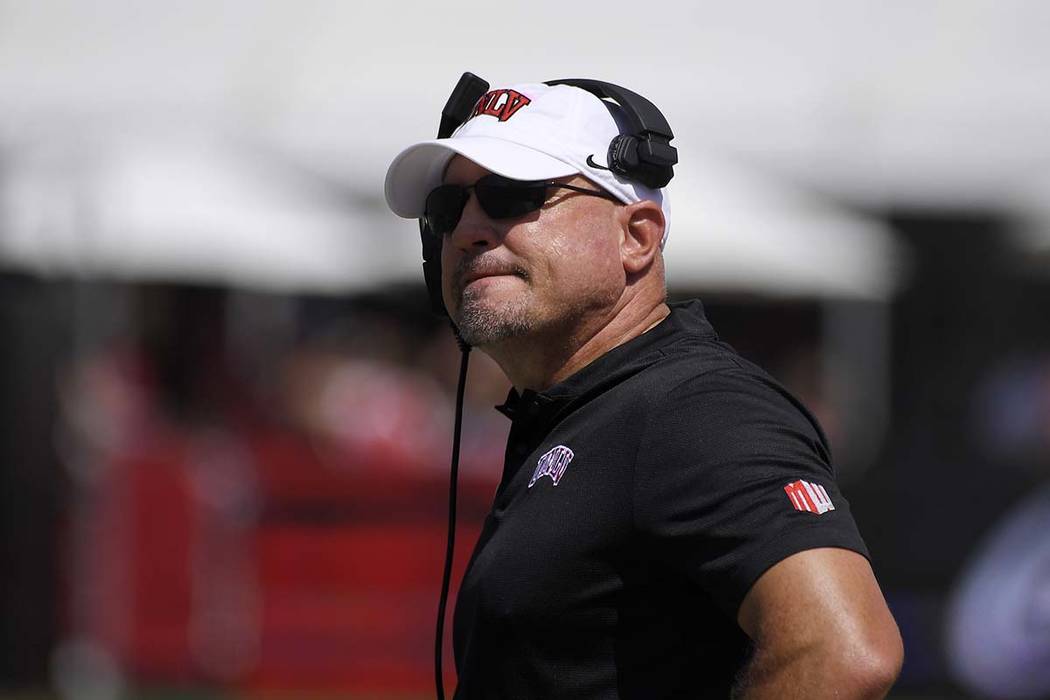 Countless books have been written on the subject. It’s a common theme in your movie of choice. Bible passages suggest it strengthens our endurance.

You know, King David and all.

But while failure is not considered fatal to those whose determination is strong enough to overcome it, UNLV’s football program has for decades existed with medical personnel standing over it holding those defibrillator paddles.

The Rebels always seem another losing season away from a few powerful electric shocks.

It has caused some — OK, many — OK, a legion of folks — to wonder if such ineptness is worth it to a public university’s bottom line.

To its long-term financial stability.

To its overall health and prosperity.

Their reasoning: Why continue hemorrhaging money for the sake of making the San Jose States of the world appear capable?

It has led them to suggest that football at UNLV simply isn’t worth it, that either cutting the sport totally or dropping to a Football Championship Subdivision level — where it could perhaps exist among a Big Sky world of Southern Utah and UC Davis and Montana and the like — is a far more practical option.

With all due respect to Grizzlies head coach Bobby Hauck, because I’d love to see if the Montana special teams looked any better in Las Vegas than those for UNLV when Hauck ran things, it’s a mistaken proposition.

Not that those who suggest such drastic change don’t own ample evidence — we are talking about a Rebels program that began playing in 1968 and has an all-time winning percentage of 39.

It has one winning season since 2000.

But here’s the part often lost in the suggestion that UNLV would be better off without major college football: Such a move wouldn’t come without serious consequences. Athletic departments traveling that road save money, certainly, but they also cash in their chips in what has become a high-stakes poker game.

Division I-A football costs millions, but it also can make millions. Just not at the level UNLV now finds itself. Not yet for the Rebels. Not ever, maybe.

But no football would mean reducing your overall scholarship numbers by 85, which could lead to significant reductions on the women’s side, because suddenly those gender equity issues that football often causes wouldn’t have to be balanced out by as many female sports.

There would be massive cuts to the overall budget, and UNLV would be left without a major magnet for fundraising. Football is the porch to Division I athletic departments, that which draws more eyes than anything.

UNLV is one of the schools nationally where basketball — especially when winning and going well — induces a larger attention base locally than football, but the latter still provides a certain status symbol, a footprint that non-football schools simply can’t replicate.

Losing football often means losing ties to alums. It affects everyone, perhaps more externally than internally. People want to read and hear about it and men’s basketball.

“When I first got there, I really took a long look at football,” said Jim Livengood, UNLV’s athletic director from 2009-13. “In other words, could football be something? In a lot of places, at this level, football can contribute. It can’t pay for everything else like a Power Five school, but it can more than contribute and help others. I don’t know if there is an answer (for UNLV) and yet I sure know it’s not an easy one.”

It never is with Rebels football, but for a program less than two years from kicking off in a new NFL domed stadium as its home base and in the process of raising the new on-campus Fertitta Football Complex, anything less than forging ahead in the wake of another losing record and no postseason berth isn’t an option.

It is said the road to freedom must be uphill, even if it is frustrating and arduous.

It seems the same holds true for a Group of Five football program.

Even at UNLV, where that hill as been a virtual Everest of challenges.

The Rebels just need to keep climbing, is all.

It would help, of course, if they could somehow get beyond base camp.