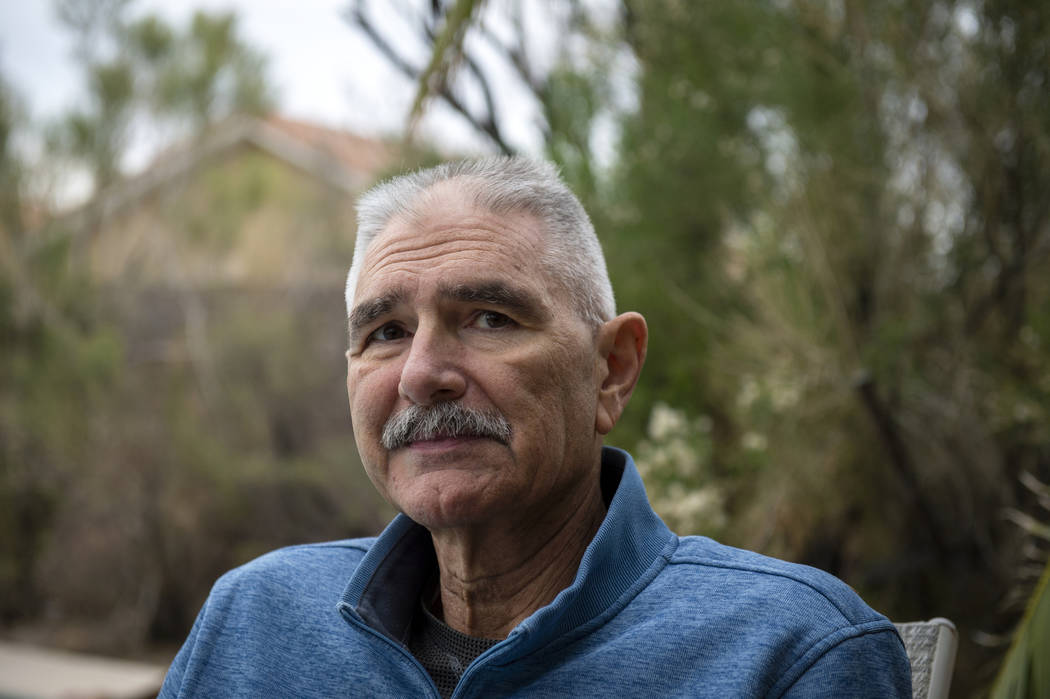 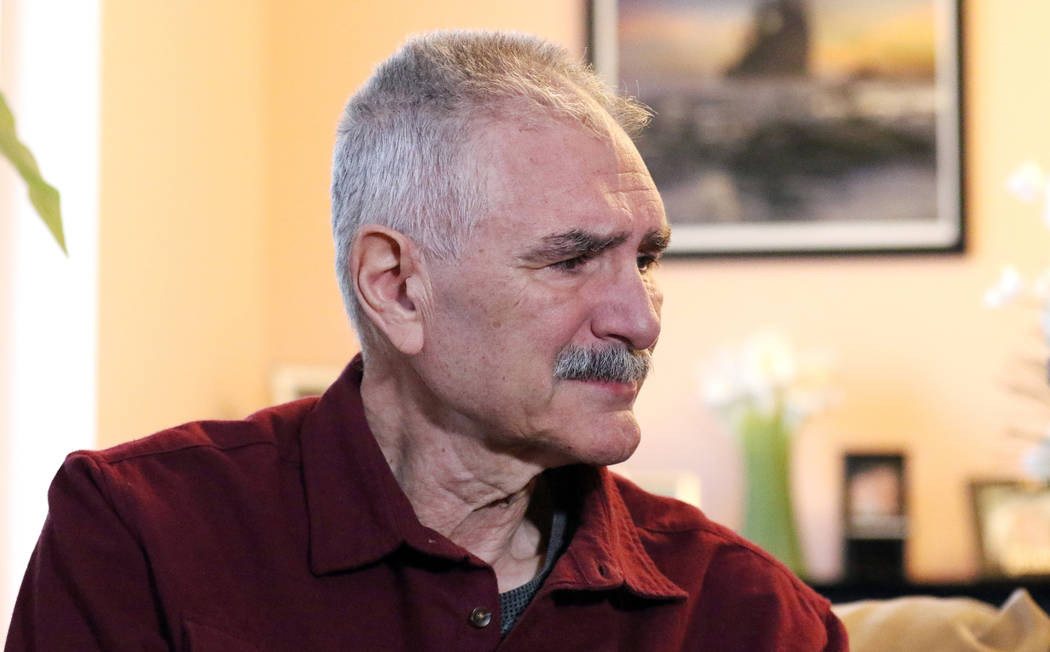 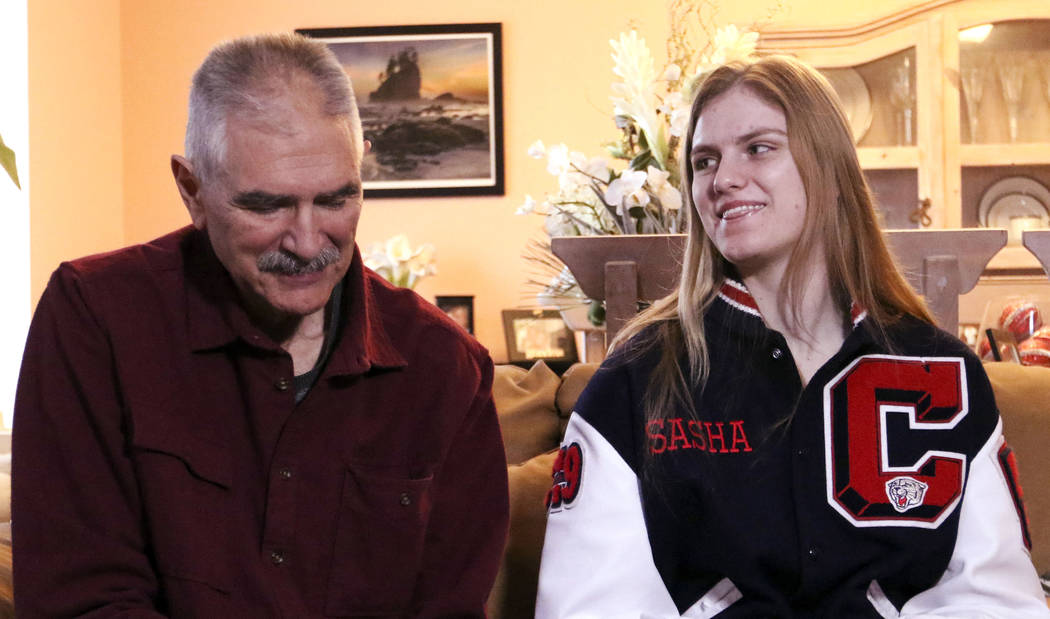 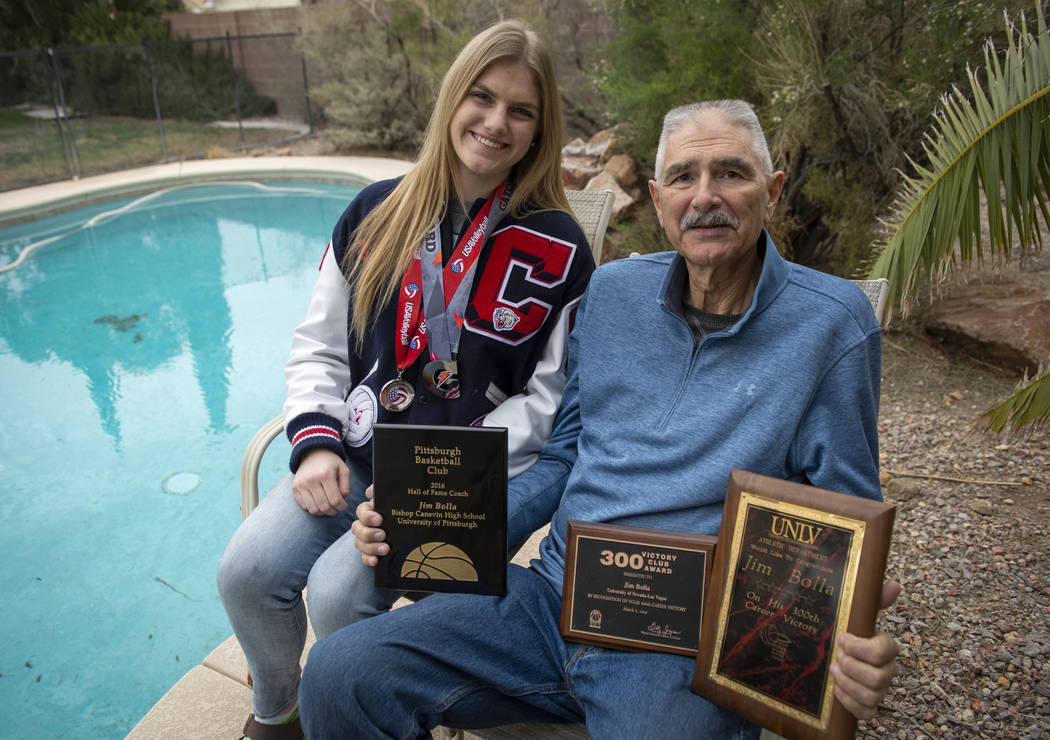 Sasha Bolla wears volleyball medals she has earned as she poses for a photograph with her father Jim Bolla, former UNLV women's basketball coach, as he holds plaques he has been awarded for his coaching outside of their home in Las Vegas, Monday, Jan. 28, 2019. (Caroline Brehman/Las Vegas Review-Journal) 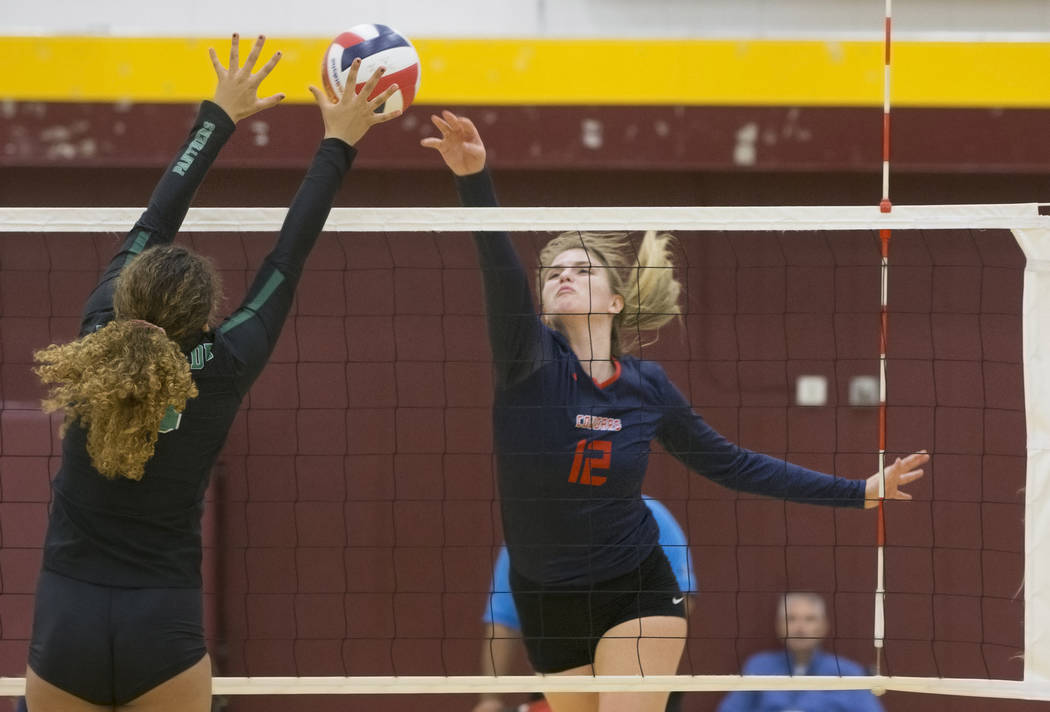 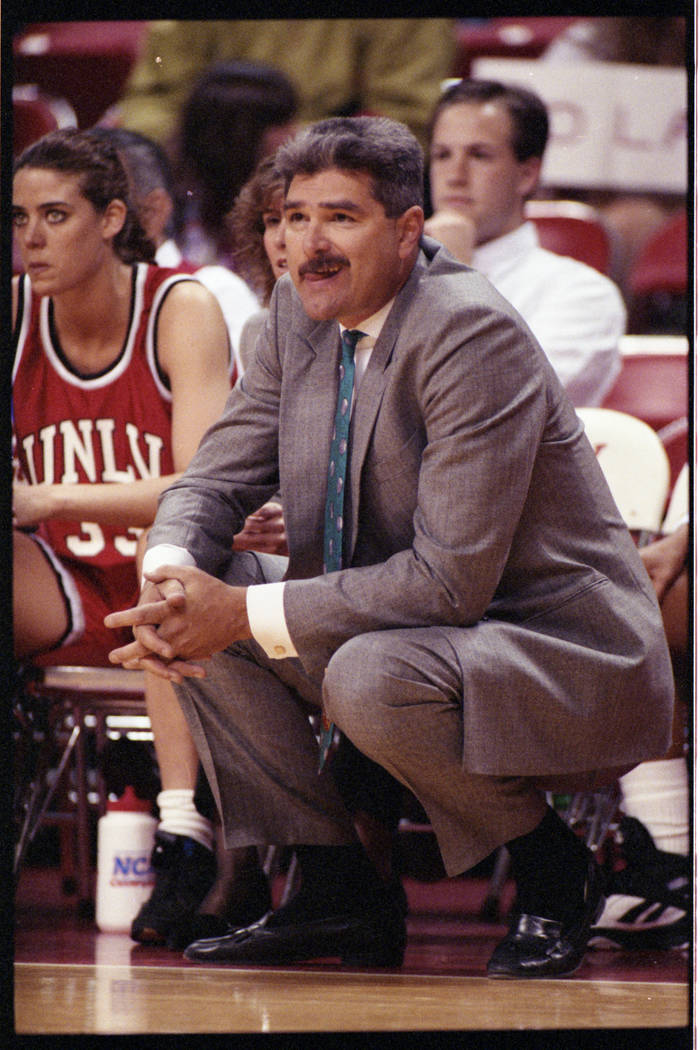 The event is the UNLV women’s basketball game against Hawaii for the Big West Tournament Championship. In addition the lady rebels secured a birth in the NCAA Tournament. The final score was UNLV 78 Hawaii 60. Hobbs of UNLV was the tournament Most Valuable Player. UNLV’s record was 23 and 6. Location was the Thomas and Mack center at UNLV. Number 40 is Tonia Carter, number 45 is Iris Dinerman. This image is of the coach Jim Bolla. In the paper March 13 page 01e. 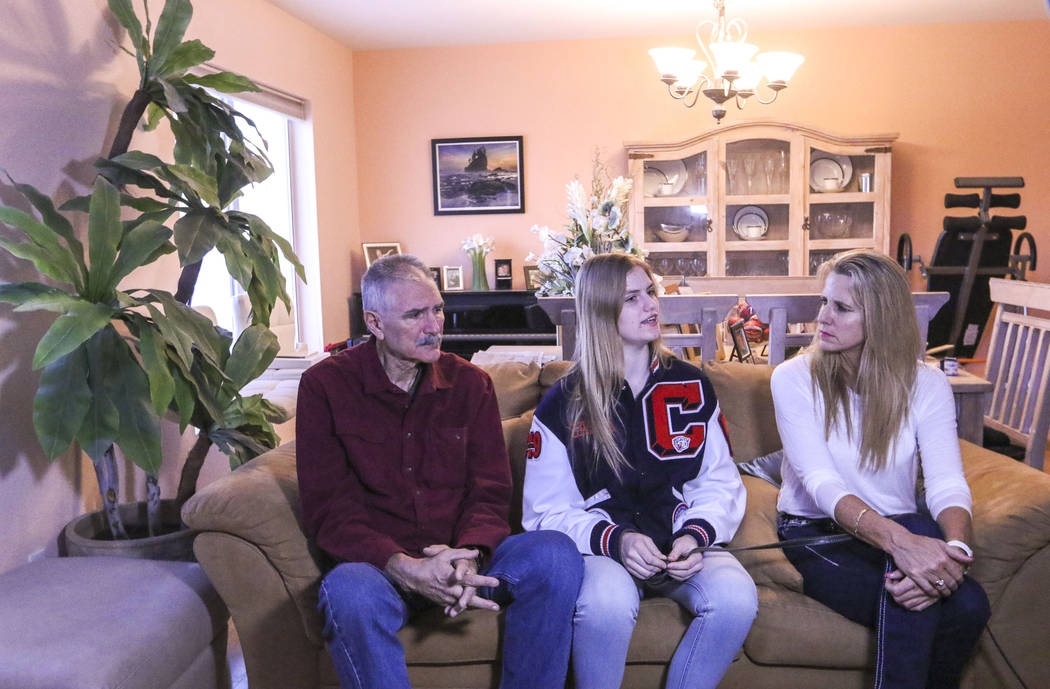 he psychologist was assigned to the ball coach’s case at UCLA Medical Center because, well, when a diagnosis of cancer is attached to one’s life resume, it invariably comes with the presumption the person affected will suffer much sorrow and despair.

Doctor: “Can we talk about your situation?”

Doctor: “Are you depressed?”

Coach: “Why the hell would I be depressed?”

Doctor: “Well, you have cancer.”

Jim Bolla has always been a tough you-know-what, Pittsburgh born and raised, the guy who would just as soon put you through that chain-link fence during a pickup basketball game as allow you within 5 feet of the rim.

Who, as center for a University of Pittsburgh team that would make the Elite Eight of the NCAA Tournament in 1974, once retaliated for a cheap shot foul on a teammate by — how best to describe it — introducing a Niagara player to the hardwood in a not-so-enchanting manner.

The hit caused then-Niagara coach Frank Layden, a man of considerable girth, to glare at Bolla in a threatening manner while straddling the sideline.

“I looked at him and said, ‘Don’t cross over that line, fat man, or you’re next,” said Bolla.

Layden, who went on to fame as head coach of the Utah Jazz, didn’t move an inch.

The competitive streak that has driven Bolla all of his 66 years is now more central, as they say, to the soul and spirit rather than the muscles. But it’s all he knows, fight like there’s no tomorrow, which means there is zero chance this tumor has any idea about the man with whom it has chosen to wage battle.

It was in August 2017 when Bolla, head women’s basketball coach at UNLV from 1982-96, suffered through seven hours of severe stomach cramps before agreeing to an emergency room visit.

That would begin a journey which ultimately showed he had a carcinoid tumor in the small intestine that had metastasized to the liver, invasive to the point surgeons later weren’t able to remove it, describing the area and spots that covered it as, “a piece of meat that looked like someone had sprinkled pepper all over it.”

Three months after the cancer diagnosis, after he went from 245 pounds to 195, Bolla went in for a triple bypass on an ailing heart that had given him issues for years.

Instead, a four-hour surgery turned into eight when six bypasses were needed, along with closing a hole and repairing a valve.

Bolla woke up, was told by doctors his heart had been mended for the time being, and immediately talked about attacking the tumor.

“To me, this is no different than blowing out a knee,” he said. “The doctors do their job, and then I do mine. I could feel sorry for myself and baby myself, but that’s not me.

“I want to kick this thing’s ass.”

Sasha Bolla, center, responds to a questions with her parents and former basketball coaches Jim Bolla, left, and Dallas Boychuk-Bolla at their home in Las Vegas on Feb. 7, 2019. (Heidi Fang/Las Vegas Review-Journal) @HeidiFang

Jim Bolla has always been a tough you-know-what, until the conversation switches to the two most important women in his life, to his wife and daughter, to the young woman whose own athletic prowess has offered him an incredible sense of motivation to live, to beat this, to win the battle.

The mere thought of her brings the ball coach to tears.

Neither wanted to know, Jim or his wife, Dallas, content to be surprised and wait for that life-changing moment.

So when it came and she had arrived, he melted.

“They said it was a girl and he just started wailing,” remembers Dallas. “And everyone in the room, all the nurses, went running over to help him. I’m like, ‘Hello! Just had a baby here. Let’s focus.’

“He was so emotional, so happy.

As in 6-foot-3 and among the elite high school volleyball players that Nevada has produced in recent years.

Sasha Bolla is 17 and a senior at Coronado High, a player so gifted that she has been selected all-state as both a middle blocker and outside hitter during her prep career.

She has returned for a final club season before deciding where to play in college, a decision that appears to have DePaul University in the lead and several others trying to persuade her their way.

She never took to basketball, never much liked it, despite her parents’ obvious love and commitment to the game — Dallas is a Hall of Famer and career leading rebounder at Stetson University who was a collegiate head coach before marrying Jim and then assisting on his staff at Hawaii.

Jim would make all of Sasha’s matches this season, a promise to himself that neither a bad heart nor cancer would stop — “I told the doctors to open me up and get the heart done or I would go to YouTube with a can opener and figure it out myself, but I wasn’t missing watching her,” Bolla said — and now has made another pledge.

He will live to see her play in college and beyond.

Sasha Bolla wears volleyball medals she has earned as she sits with her father, former UNLV women’s basketball coach Jim Bolla, outside their Las Vegas home on Jan. 28, 2019. Jim Bolla holds plaques he has been awarded for coaching. Caroline Brehman/Las Vegas Review-Journal

“I know there were games this season where he wasn’t feeling well at all, and yet there he was, and that meant a lot,” said Sasha. “I joke with him that he’s such a fighter, he doesn’t feel pain. I know he’s really strong and faces adversity all the time with this, but he never gives up until he gets his way.

“Whether it’s getting a better deal on the phone with DirecTV or beating cancer, he won’t stop until he wins. I have no doubt he will see me play in college.”

He is as competitive now as when helping lead Pitt to a school-record 22 straight wins as a player and UNLV to a No. 2 national ranking as a coach.

The Rebels in women’s basketball have made the NCAA Tournament eight times, the last being in 2002. Seven of those appearances came under Bolla, including a Sweet 16 trip in the 1988-89 season. The program has won five conference tournament titles, all under Bolla.

He spun such results — 300 wins, four Big West regular-season championships, 11 seasons of 20 wins or more — playing not out of Cox Pavilion, but rather from the school’s South Gym.

His teams would go off campus to lift weights.

And yet all he did was win.

“He’s like a lot of athletes I coached in that he always says he is fine, whether he is or not,” said Dallas. “You can’t gauge when he really isn’t fine. It’s hard. One of our closest friends, we went to a funeral three weeks ago, of someone who died of cancer and they have a daughter Sasha’s age. It gets scary. It hits home, but I think with the doctors we have, we feel like we’re in a good place.”

How tough is Jim Bolla?

Five years ago, with his wife and daughter on a trip to Disney World in Orlando, Florida, he went in for a routine doctor’s visit and instead was admitted to the hospital for heart surgery, in which stents were implanted.

“They were pretty upset that I didn’t tell them until they got back,” said Bolla.

It’s how he approaches these sorts of moments that might otherwise bring most folks to their knees with fear, like when his oncologist at UCLA couldn’t remove the tumor in November and has instead attacked it through shots of chemotherapy, which Bolla recently learned he would receive every 21 days instead of 28.

There are good days, lots of bad ones, and yet no one knows the difference with him.

Recent scans showed the tumor to be stable, so between his heart doctors in Las Vegas and his oncologist at UCLA — who told Bolla his goal is to retire in 15 years and have to hand the case off to a colleague — the ball coach remains steadfast in his ambition to beat every last odd.

“I never asked, ‘Why me?’ No way. Not even a consideration,” said Bolla, who besides working for Elite Golf Management in town also hosts his own sports talk radio show. “I got it. Big deal. Let’s go get it.”

It was during a visit to UCLA recently when that same psychologist stopped by for a chat.

Doctor: “How are you doing?”

Doctor: “Surgery didn’t do as hoped.”

Coach: “No big deal. We tried it. Look, this thing isn’t beating me. I’m going to watch my daughter play volleyball in college. No ifs, ands or buts. I will do whatever is needed to make that happen.”

As he recounts the conversation and comes to the part about Sasha, it happens again.

He stares straight ahead, lips stern, as tears begin to well in the ball coach’s eyes.

Cancer has no idea who it messed with this time.