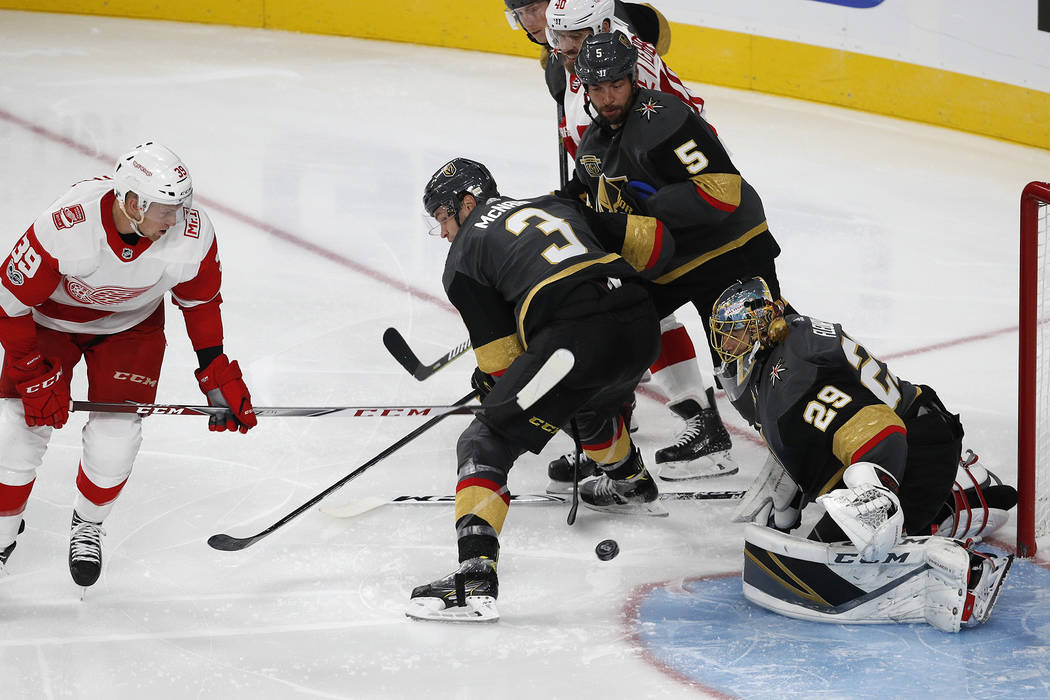 George McPhee can recall suffering just two concussions as an NHL player, but you figure the number was higher.

Back in those days, when you got whacked in the head and it felt as though the arena was spinning and it was impossible to focus your gaze, there was another word for it.

But this is an age of protocols, of frightening words like chronic traumatic encephalopathy (CTE) and lawsuits that follow, of major professional sports leagues insisting their procedures are best when it comes to protecting athletes against brain injury.

Of making sure the health of someone like Marc-Andre Fleury is paramount to anything, including his competitive nature.

Fleury has been placed on injured reserve by the Knights, the goalie and face of the expansion franchise lost for the time being with a concussion suffered in the second period of a 6-3 loss to Detroit on Friday.

Malcolm Subban started in his place Sunday and, in just his third NHL game, was terrific.

Subban stopped all but one of Boston’s 21 shots and the Knights beat the Bruins 3-1 before 17,562 at T-Mobile Arena.

It’s more than fair — not to mention responsible — to inquire about Fleury’s state immediately after taking a knee to the head from Anthony Mantha, and why the goalie not only continued playing, but then came out for the third period, when Detroit scored four goals.

Of why a player who laid on the ice holding his head immediately after the hit never left the game.

This was coach Gerard Gallant following the loss Friday: “The trainer takes care of the goaltender. No one came to me and said, ‘He’s hurt and he’s not ready to play.’ He was fine.”

This was Gallant on Sunday: “I can’t tell you the truth all the time.”

I get it. The secrecy that surrounds pro sports and their millionaire athletes compares to Coca-Cola guarding its recipe. Woody Allen in, like, any role he ever played, isn’t as paranoid as those running teams when it comes to injuries.

You want some real loons regarding surreptitious information?

Try football coaches. Those guys lie more than you blink.

The NHL has in recent times implemented a number of policies and procedures to enhance its concussion protocol, including spotters monitoring all games from New York and in each arena.

We know the NFL’s concussion issues aren’t getting any better. We also know NHL commissioner Gary Bettman, in a 2016 response to an inquiry from Sen. Richard Blumenthal and in a time when the league continues to face a class-action lawsuit over its handling of concussions by former players, famously (ignorantly?) restated his belief that there is no proven connection between concussions and the degenerative brain disease CTE.

It still comes down to testing, to a team’s medical staff assessing the situation and determining whether the player is hurt or out-acting DiCaprio when answering questions to remain in a game.

“(Fleury) passed all the tests on ice and between periods with flying colors,” said McPhee, who has been a member of NHL committees studying concussions. “It wasn’t until after the game that there was a spike with one of the tests, an issue. We knew then there might be a problem.

“It was the same issue (Saturday morning). So we will continue to follow the protocol and just be very careful with him and take our time. I’m definitely comfortable with the protocol and the way our club performed with it (Friday night).

“(Fleury) thought he was fine. He’s a team player. We were winning (3-2) at the time and he wanted to preserve the win. He thought after the game that he let the team down.”

It’s not a first for Fleury, who suffered two concussions with Pittsburgh during the 2015-16 season. There’s no question the Knights defense let him down often in that third period Friday, but it was also obvious he wasn’t the same goalie who had been so impressive in the season’s first three games.

His teammates knew it also.

“I think you saw it on the last (Detroit) goal,” said forward David Perron. “His energy was maybe a little bit different on the ice. I’m just looking forward to getting him back and making sure he does the right steps to get healthy again.”

Said defenseman Colin Miller: “You kind of look back and he definitely got hit pretty hard there on the head. It’s never a good thing. They have the protocol in there for a reason, but as a competitive guy, he wanted to finish the game. Just a bad break.”

That, and a whole lot more serious than — how did Gallant refer to it Saturday? — a “maintenance day.”