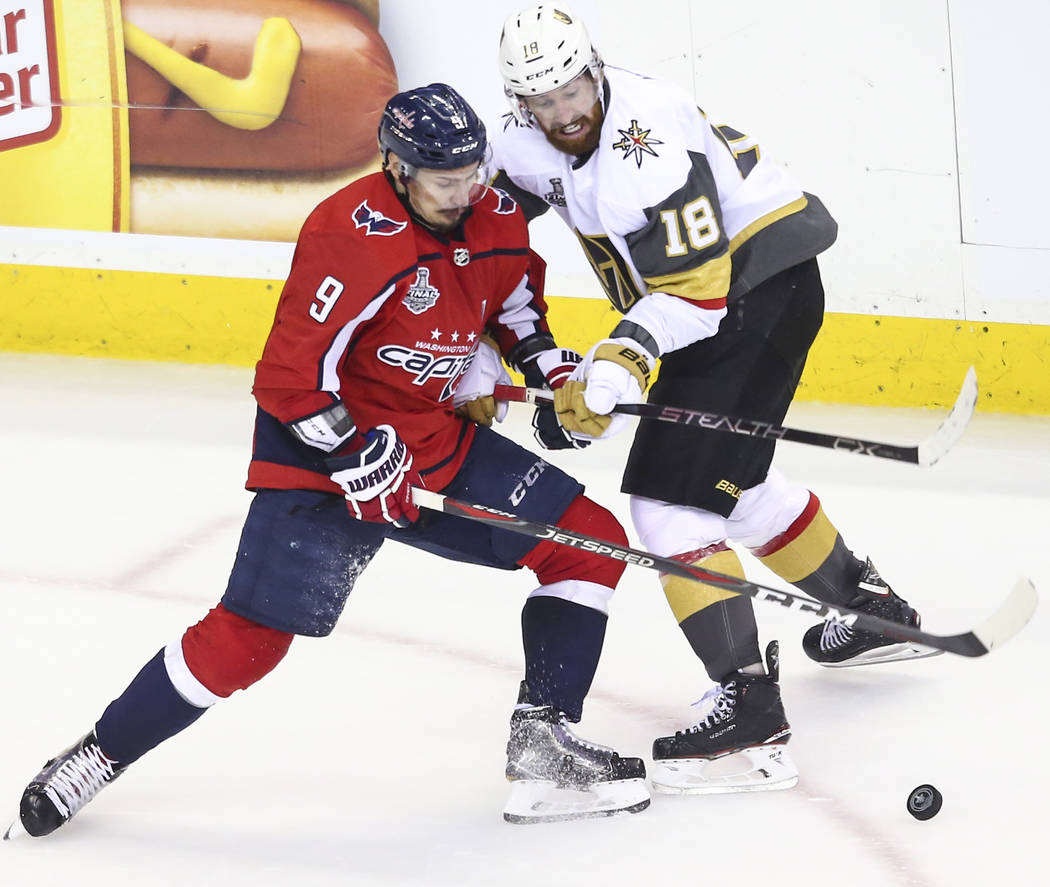 WASHINGTON — So, yeah, the T-shirt slogan just took on a completely different challenge.

They say, “Create History,” and are worn by Golden Knights players, who find themselves in the sort of predicament that is perhaps too high a mountain to scale, even in a season full of incomprehensible ascents.

History is fairly clear on what happens to teams trailing 3-1 in a best-of-seven Stanley Cup Final series, a reality for Vegas after dropping its third straight game to the Capitals.

The final on Monday in Game 4 was 6-2 at Capital One Arena, where Vegas just might have played its best game of this final and still came up far too short.

Think about that. The Knights competed almost exactly as they needed to and still trailed 4-0 after two periods before losing, which says as much about how good the Capitals have performed than anything.

A difficult hike back?

Teams with a 3-1 lead have won the Cup 31 straight times.

The last time a team rallied from such a deficit was 1942, when the United States made its first air raid attack on the Japanese in World War II, a gallon of gas was 15 cents and Glenn Miller and his orchestra were dominating the music charts.

So, yeah, the T-shirt just became Everest, a climb that continues with Game 5 on Thursday night at T-Mobile Arena.

“We can’t feel sorry for ourselves,” said Knights forward James Neal. “It’s do-or-die for us, so we have to go find a way to put pucks in the back of the net and play the same way we did in this game.”

You can talk about lucky and unlucky bounces, about hitting posts at one end and scoring off the aid of a blocker at the other, about calls that were made and missed, about any sort of rationalization you desire to explain how the Knights are one game from elimination.

None of it means more than this: Washington is just better right now.

It’s blocking more shots, getting better goaltending and coaching, scoring on its power play, killing those penalties against it. It has since losing Game 1 totally grabbed hold of the series and dictated the past three outcomes.

Four games in, it’s just better, is all.

“We’ve been in this position before, where people don’t believe we can do something that we end up doing,” said Knights forward Pierre-Edouard Bellemare. “We played our system better this game. We worked hard. Shots didn’t go in. But we also can’t win three games in one night, so the only thing we are thinking about is the next one.

“Just one game. Win that and then worry about the next.”

It would make for the ultimate conclusion to a season no one in their right minds predicted, should the Knights somehow do what only the Maple Leafs have accomplished in a final, rallying from three games down to beat the Red Wings some 76 years ago.

Wouldn’t that be the most unforeseeable of endings?

Wouldn’t it be, given where this journey began, the most poignant of final chapters?

It’s also true that Washington hasn’t won the Cup, and as an organization has blown more playoff series than any team when up three games, including the most recent example in 2015 against the Rangers in the second round.

So there is a different type of history working here.

“We understand those are footnotes, but we also realize this (specific) team hasn’t been to a final before and we want to write our own story,” said Capitals forward T.J. Oshie. “We haven’t dwelled on the past. We don’t even dwell on the previous game, let alone what has happened years ago.

“There has been a lot of heartbreak here. We know that. But we’re just going to keep working and trying to do something pretty cool.”

The Knights are just trying to stay alive and breathing.

But history is fairly clear: While it might not be time for any Amens to conclude a season’s eulogy, it wouldn’t be inappropriate for folks to begin filling in the pews.

Create History has never appeared so daunting a task.