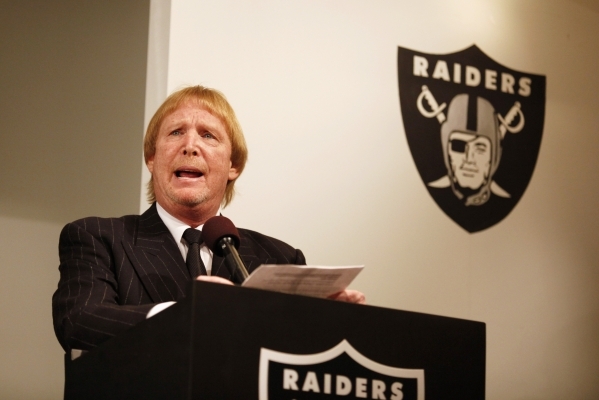 It was at this time last year in a ballroom at the Phoenix Convention Center when Roger Goodell was posed a familiar question at his annual state of the league address at the Super Bowl: Did the commissioner think Las Vegas could sustain an NFL team?

“I certainly can’t speak to that because I haven’t had any dialogue with officials in Las Vegas about how that could happen successfully for Las Vegas and for the NFL,” Goodell said. “A stadium would be a big component to that. I’m not sure that exists right now. I do understand the passion of the fans in Las Vegas and their interest in football.”

He is about to understand it at a level incomparable to the past.

Oakland Raiders owner Mark Davis is scheduled to meet with Las Vegas Sands Corporation Chairman and CEO Sheldon Adelson on Friday in Las Vegas, where the main topic is expected to center on a proposed $1 billion-plus domed stadium near the Las Vegas Strip, a public-private partnership between Las Vegas Sands and a group of investors.

The math is pretty simple: The Raiders are looking for a home, and a state-of-the-art stadium in Las Vegas is coming.

Davis was invited to Las Vegas to meet with Adelson.

“The whole concept of the stadium, everything we have looked at, is under the assumption that there is no NFL team,” said Andy Abboud, senior vice president of government relations and community development for Las Vegas Sands. “We feel this project will go forward without an NFL team, because there isn’t one right now. But we are talking to NFL teams to see if they would be interested. This is first and foremost about the community and UNLV and about enhancing visitation.

“We’re aware of the (Raiders) situation, but that doesn’t mean there wouldn’t be other (NFL) teams interested in Las Vegas. It’s a market for a team. We already have hundreds of thousands of people who come here to watch (sports) on television. It doesn’t take much of a leap to realize people are going to come here to see it live.”

It’s true the stadium would be built on 42 acres of land on Tropicana Avenue that UNLV recently purchased, and that the stadium would serve as the home for Rebels football, but any stadium project here immediately raises the question of an NFL tenant.

Goodell and his office have long championed what is an absurdly hypocritical viewpoint regarding Las Vegas housing an NFL team, that the league’s anti-gambling stance would preclude the two sides from forging a union.

This, a league that understands its profit margin is directly linked to those who wager on games and play fantasy football, which already features teams in cities (New Orleans, Baltimore, Cincinnati, etc.) with casinos, which now stages multiple regular-season games at Wembley Stadium in London, a facility that sits within stone’s throw of more than 30 gambling parlors, which has many of its 32 teams in sponsorship deals with either FanDuel or DraftKings.

That is fully aware more than $4 billion will be bet in the United States on this year’s Super Bowl between the Denver Broncos and Carolina Panthers, and how much such gigantic interest will continue to line the pockets of its owners.

“I think if it would ever get to the point of (the NFL coming to Las Vegas), there’s a lot of people in this town ready to have this discussion,” Abboud said. “The city has at some point, whether it’s with the NCAA or NFL, a lot of key leaders in the community that can make the case that Las Vegas is just fine and a safe place for a team to operate.

Should push come to shove and corporate helmets collide and Davis decides the best place to relocate the Raiders is Las Vegas, there isn’t a better franchise in which to challenge the NFL’s sanctimonious and fascist ways when it comes to this city landing a team.

The Raiders aren’t just an ideal fit for Las Vegas.

They’re a perfect one.

Silver and Black in Sin City.

I can see the heads of marketing folks spinning now.

But it’s more than how commercial interests might seamlessly unite, more than the fact that Oakland continues to seek a relocation landing spot after NFL owners recently rejected its proposed move to Los Angeles.

The Raiders have a well-chronicled history of standing up to the league in such matters, dating to when Davis’ late father, Al, wanted to move the team to Los Angeles in 1980 but was blocked by a court injunction. He filed an anti-trust lawsuit against the NFL, and in 1982, a federal District Court ruled in Davis’ favor and the team officially relocated.

It’s also true that Mark Davis simply could be using Las Vegas and any number of other cities the Raiders have been linked to over recent years merely as leverage against the city of Oakland in hopes of getting a stadium built there, even though the team doesn’t have a lease with the Oakland Coliseum today.

If not, and Davis seriously intends to move his team — and there is no reason to believe otherwise — others are in play for them. Should the San Diego Chargers choose not to join St. Louis in Los Angeles, it would leave an immediate opening for the Raiders there.

Should the Chargers leave their world of sandy white beaches and fish tacos — which is exactly what will happen — many have speculated the Raiders could land in San Diego, but fans there have spent their lives despising their AFC West rivals, so the marriage would hardly generate an instant lovefest from the locals.

San Antonio always has been linked to such relocation stories, specifically with the Raiders, and former NFL owner Red McCombs has pledged his support for such a move to the tune of promising he would invest in the team and help line up others to do the same.

But do you really believe Dallas Cowboys owner Jerry Jones and Houston Texans owner Bob McNair would support a third team in the state? Any relocation requires the approval of 23 NFL owners, and the Jones-McNair duo have enough juice to deny any serious push for San Antonio.

Sacramento has been mentioned for the Raiders. Oklahoma City. Portland. St. Louis. Teaming with the San Francisco 49ers at Levi’s Stadium in Santa Clara, Calif., site of this year’s Super Bowl.

But when you consider what the Sands stadium deal is offering and the hunger for NFL football here, Las Vegas poses as superb an option as any.

Here’s the best part: Those proposing the stadium project want nothing from the NFL, rightly believing that the facility would host countless events and put heads on hotel pillows for reasons beyond just professional football.

If the NCAA also would drop its archaic views in not allowing its championship events to be hosted in Las Vegas because of sports gaming, you could have a Final Four here.

Fact: Nothing, and I mean nothing, carries the power and influence of landing an NFL team.

Goodell was correct in one sense at this time last year in regards to the NFL and Las Vegas: It wasn’t worth discussing without a stadium component.

I’m assuming there will be a question or two about it at this year’s state of the league address.

Now taking the field, your Las Vegas Raiders … sort of catchy, no?