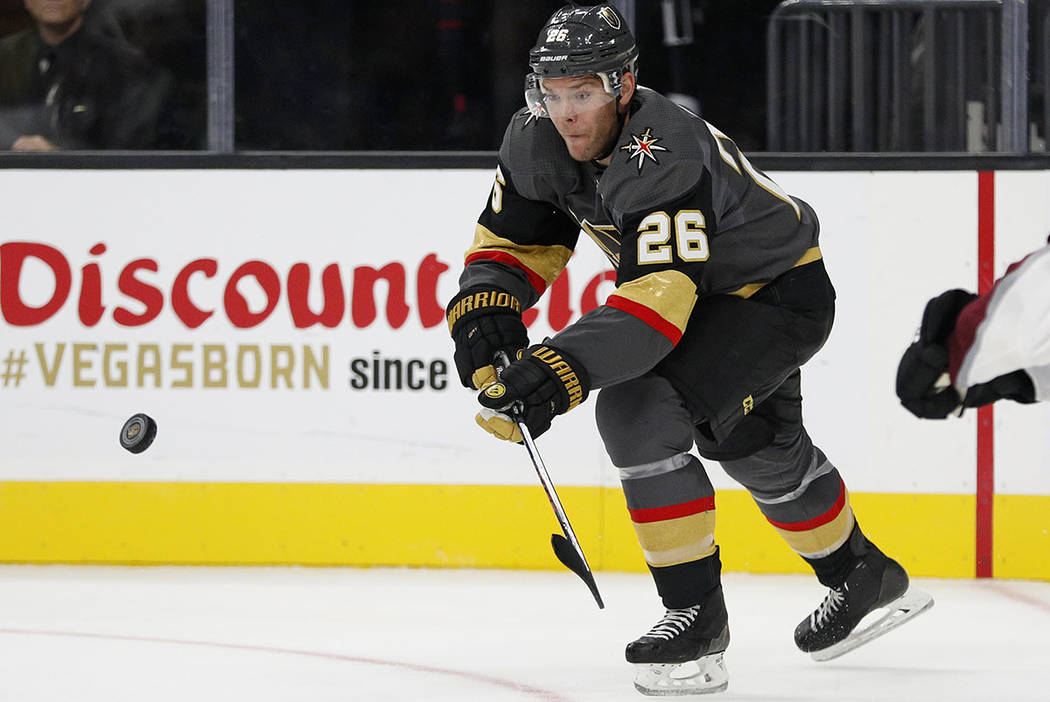 Vegas Golden Knights center Paul Stastny, seen in September, vies for the puck against the Colorado Avalanche during the third period of a preseason NHL hockey game in Las Vegas. (AP Photo/John Locher)

He played tennis and soccer growing up, too. Maybe that’s where the hand-eye coordination was developed beyond just his time on the ice, why he can make those ridiculously tough backdoor passes appear easier than lacing skates.

Maybe most of it comes from Dad, because Hall of Famers have a way of passing things down.

Passing being the operative word.

Good genes and such.

Paul Stastny has in the last several games shown those skills most assumed he would bring when signing a three-year $19.5 million contract with the Knights, when becoming the team’s highest paid player in the offseason, when arriving as a veteran center to lead the second line.

But injuries have had their way of finding Stastny and did again in the season’s first week, when Sabres forward Jack Eichel slammed into Stastny’s right knee and sent him to injured reserve for two months.

He’s back now, and the Knights are as hot as any NHL team, having won their seventh straight Tuesday night in beating the Rangers 4-2 before an announced crowd of 18,249 at T-Mobile Arena.

Consider: Stastny and forward Max Pacioretty were the team’s major acquisitions following the Knights’ trip to a Stanley Cup Final, and yet Tuesday was just the eighth game they have been active together, the latter elevated to the top line against New York with Reilly Smith now on injured reserve.

You can’t quantify instinct in sports, never mind explaining why that of one athlete is so sharper than another. Stastny just sees things develop sooner and better than most, who teammates say is so engrossed with all things hockey, could tell you the exact curve and flex of everyone’s stick while also expertly dressing down the equipment choices of all Knights, piece by piece.

Which means I’m not sure this guy is the life of any party but would likely be the first overall pick when teams are chosen for a game of hockey trivial pursuit.

“I had heard he was a really smart player, not the fastest, didn’t have the greatest hands or anything like that, but was unbelievable in the faceoff circle and was one of the smartest guys in the league,” said forward Alex Tuch, now following Stastny’s direction of the second line. “But he has blown me away, honestly, way more than I thought. I learn something from him every game.

“His hockey knowledge is through the roof. He can talk to you about hockey for hours on end. The way he’s able to see the ice, make passes, it’s amazing.”

Tuch offered his own Stastny impression Tuesday with a no-look backhanded pass to spring Cody Eakin, who answered with his 13th goal for a 1-0 lead in the first period.

There is something about great passing, about those whose mental aptitude tends to move at a swifter rate. Peter Stastny was better at this during his career and most everything else, the league’s second highest scorer of the 1980s after Wayne Gretzky.

His son was the recipient of such knowledge.

“He was constantly watching me and analyzing what I was thinking on certain things and what I was seeing,” said Paul Stastny, 33 and in his 13th NHL season. “He was like me in that he was a playmaker who would rather have an assist than a goal. Make those around you better.

“I still find myself asking, ‘Why?’ a lot, whether it’s hockey or real estate or raising kids or eating healthy or doing treatment. The game evolves and so does life. I still want to be better at everything. If you can continue to improve just 1 percent over 82 games and into the playoffs, that can mean the difference in one or two wins.”

The Knights are winning like crazy and Stastny is back and part of the action, having recorded points in seven of his 13 games since returning, including five of the last seven, including an assist on Ryan Carpenter’s empty-net goal Tuesday.

He’s showing the type of play most excepted upon his arrival.

Which, I suppose, means one thing: Don’t knock your hockey playing kid for wanting to give tennis and soccer a try.