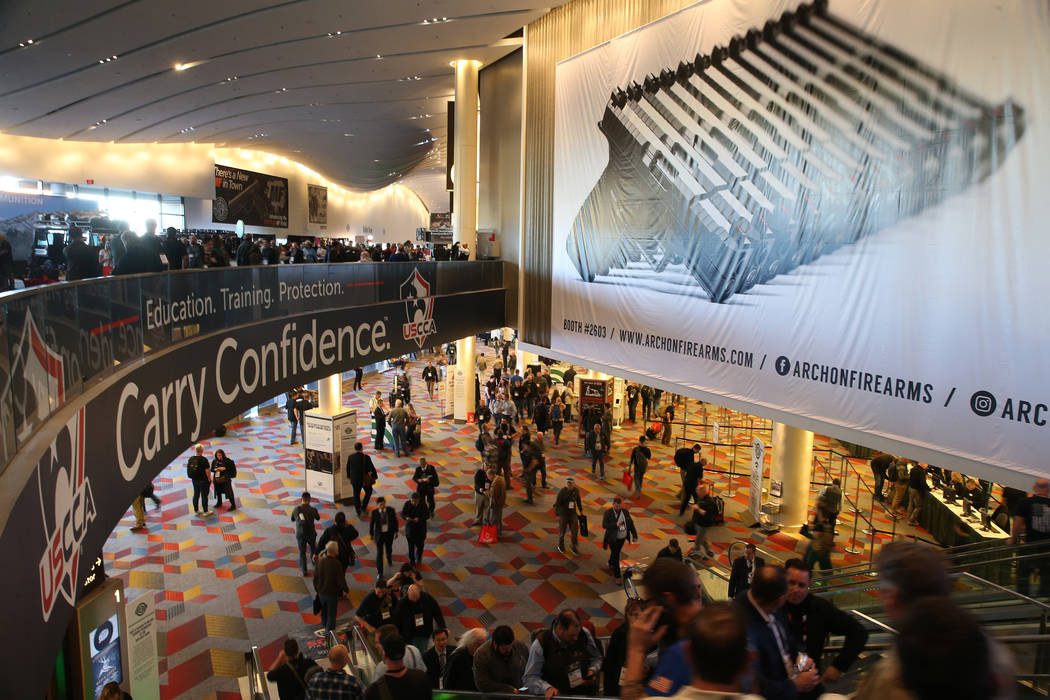 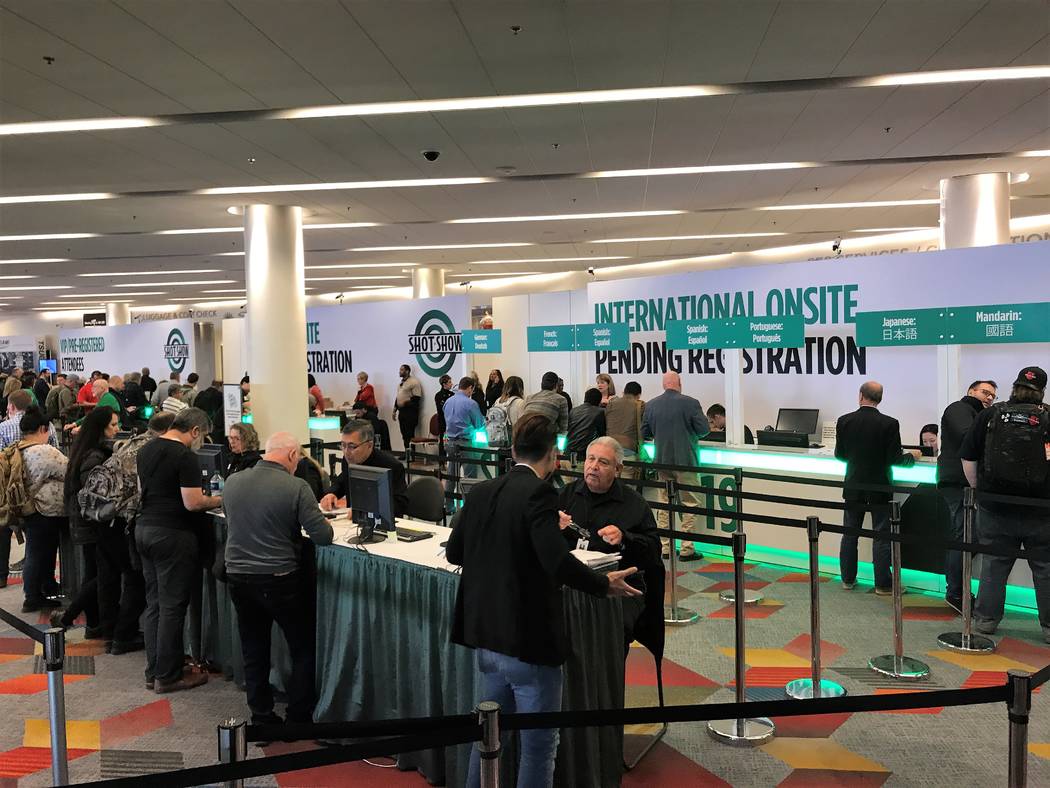 The 41st edition of the Shooting, Hunting and Outdoor Trade (SHOT) Show opened Tuesday at the Sands Expo Center in Las Vegas. This is the 21st time the show has been held in Las Vegas and is an international event drawing people from more than 100 countries. (Doug Nielsen) 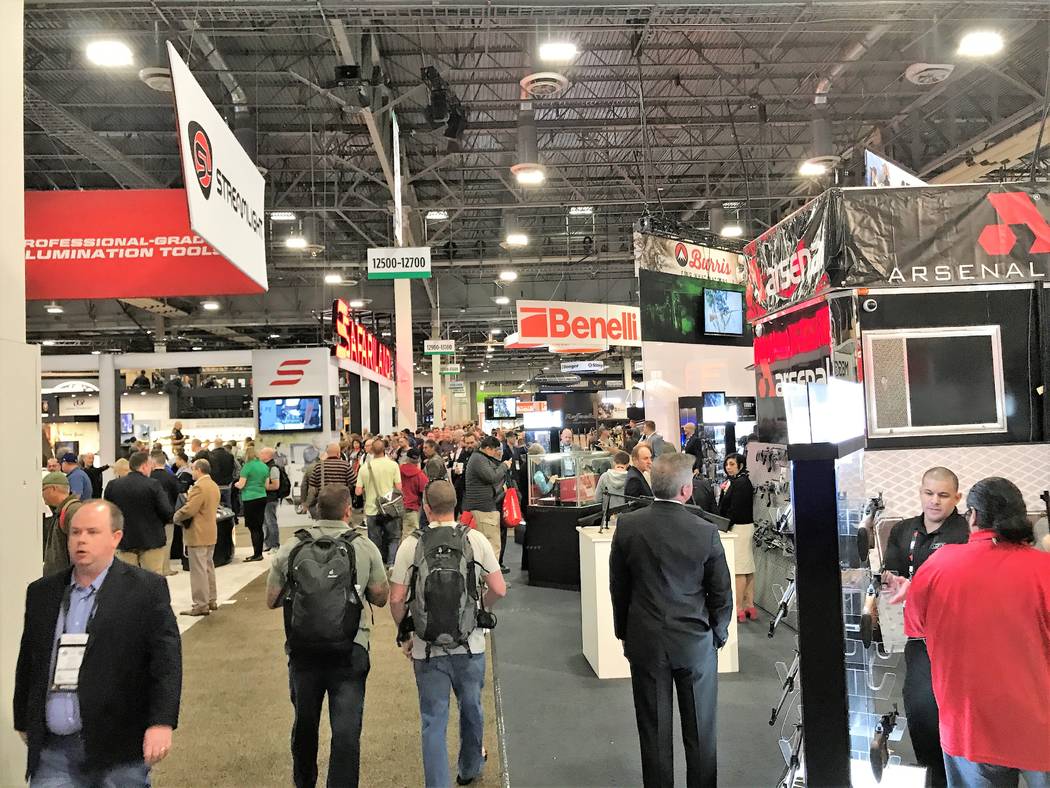 People from all 50 states and more than 100 countries find more than 12.5 miles of aisles lined with industry-related exhibits during the Shooting, Hunting and Outdoor Trade (SHOT) Show in Las Vegas. (Doug Nielsen) 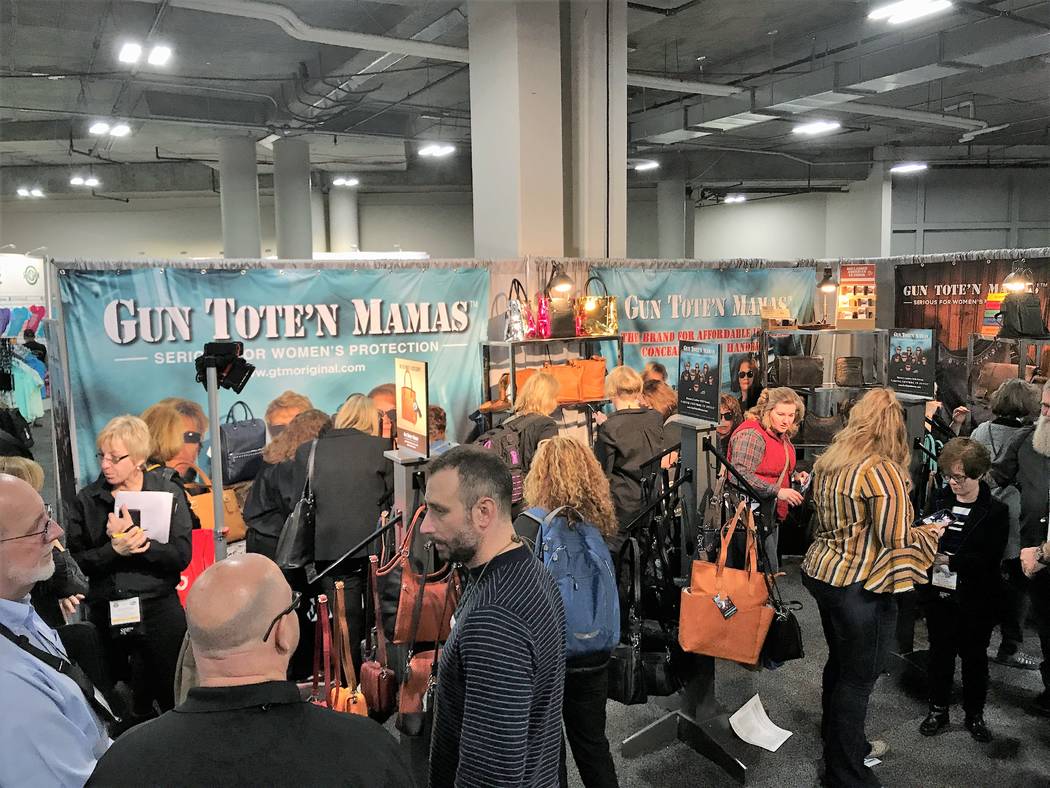 While perusing the exhibits at the Shooting, Hunting and Outdoor Trade (SHOT) Show, retailers will find a wide variety of products available from suppliers around the world. Gun Tote'n Mamas specializes in concealed carry options for women. (Doug Nielsen) 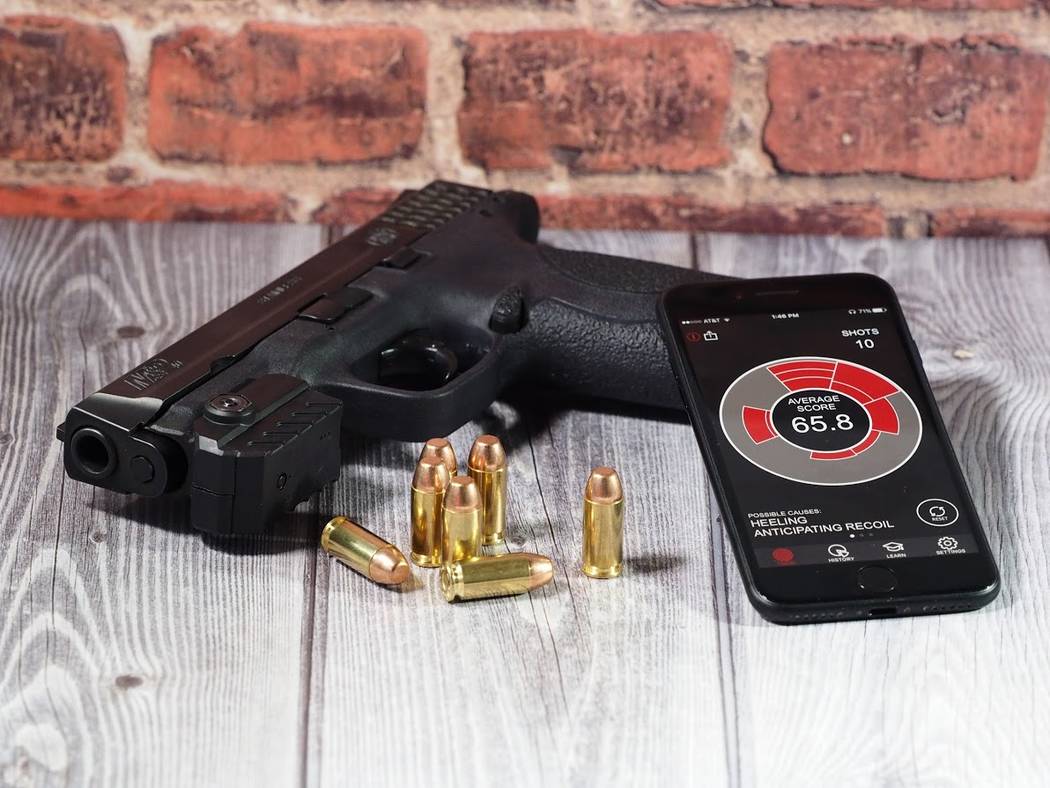 Recreational shooters looking to improve their scores can get a little high-the help from MantisX, a system that combines a motion sensor with an app to map the movement of a firearms muzzle during the firing process. The red segments on this chart indicate the shooter has a problem with heeling the firearm in anticipation of felt recoil. (MantisX) 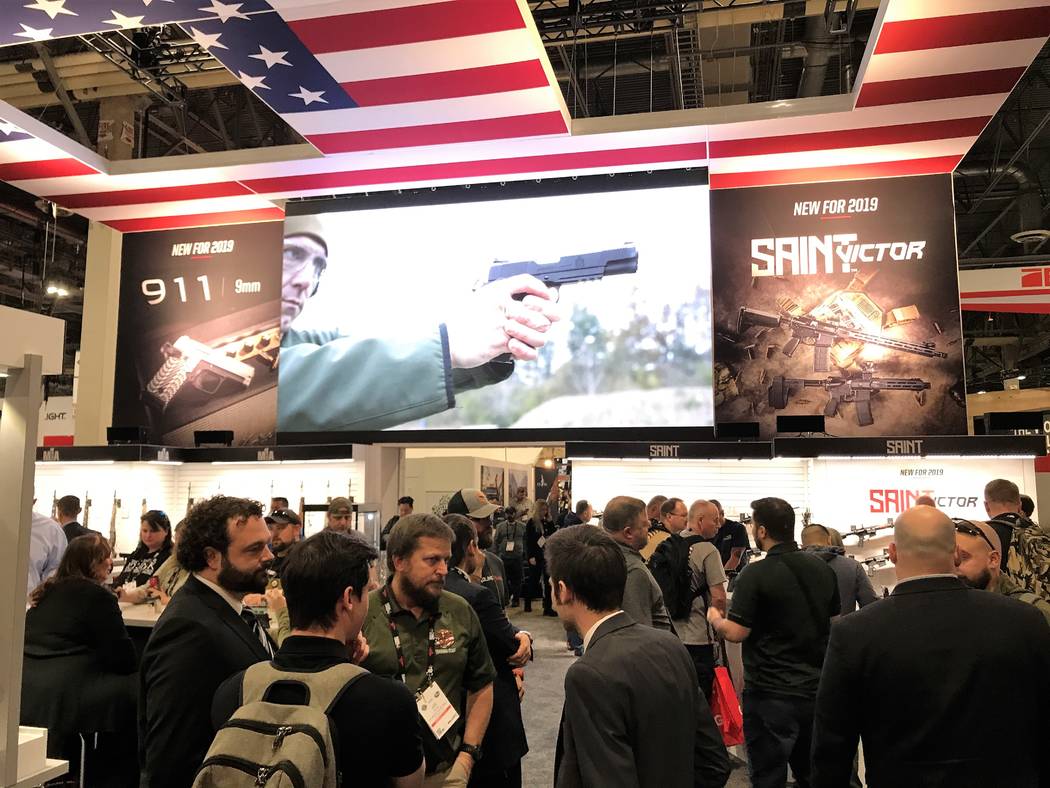 The 41st edition of the Shooting, Hunting and Outdoor Trade (SHOT) Show opened Tuesday at the Sands Expo Center in Las Vegas. This is the 21st time the show has been held in Las Vegas and is an international event drawing people from more than 100 countries. (Doug Nielsen)

The National Shooting Sports Foundation, which owns the event, describes the SHOT Show as “the once-a-year gathering place for the shooting, hunting and outdoor industry — manufacturers, wholesalers, retailers, publishers and various non-profit organizations. It’s where a passion for firearms, ammunition and outdoors equipment, plus the industry’s unified support for the Second Amendment, are on display.”

My SHOT Show wanderings always begin at the New Product Showcase. One of the products that caught my attention was MantisX, which has the potential to help new and experienced shooters improve their technique, especially when it comes to such a touchy thing as trigger control. Its creators call it an “intelligent shooting performance system.”

The MantisX utilizes a firearm-mounted smart sensor and a smartphone app to track and digitally document the muzzle’s movement as the shooter squeezes the trigger. It can be used in conjunction with any device using the iOS or Android operating systems.

“What we care about as you are pulling the trigger is are you staying steady on target,” said Justin Rogness, a developer at MantisX. “Some people shoot better than what they think, but Mantis will be able to show you that.”

To demonstrate MantisX, Rogness dry fired a CO2-charged pistol three times. Each time he squeezed the trigger, any movement of the muzzle was captured by the app and mapped out on an iPad. The mapping takes place on a screen with an image of a target created by red rings over a black background. That image is then divided into four quadrants by two white lines, one vertical and the other horizontal through the target’s center.

The shooter’s hold of the firearm is documented by a blue line. Any movement caused by pulling the trigger is captured in yellow.

The app gives each shot a score ranging anywhere from 1 to 100. The more movement there is during a shot, the lower the score. Rogness scored an average of 92. His high was 98. Scores are displayed on a circular chart whose center is surrounded with red-colored segments that reflect shot placement. This enables a shooter, or his instructor, to quickly identify tendencies.

“The larger the red, the more a problem it is in that area,” Rogness said.

The images documenting a shooter’s tendencies are exaggerated. His actual movements are typically much more subtle, which can make identifying trouble spots in a shooter’s technique a challenge. MantisX is designed to overcome that.

“If you are perfectly balanced as you are pulling the trigger, you are not going to see any movement. But everybody has some slight weaknesses. Some people are going through injuries that are causing them to be unbalanced as they pull the trigger,” said Rogness.

MantisX has the capability of storing training data, so you can look back and document improvement or identify long-term problems. The system also can be used with rifles and other firearms types, but it will be easiest with those firearms that are fitted with a rail.

Perhaps the best thing about MantisX is the cost. The sensor device sells for $150 and the app can be downloaded for nothing. Check it out at mantis.com.

The draw process for spring turkey tags in Nevada is now underway. Applications can be submitted at NDOWlicensing.com. The deadline is Feb.5.