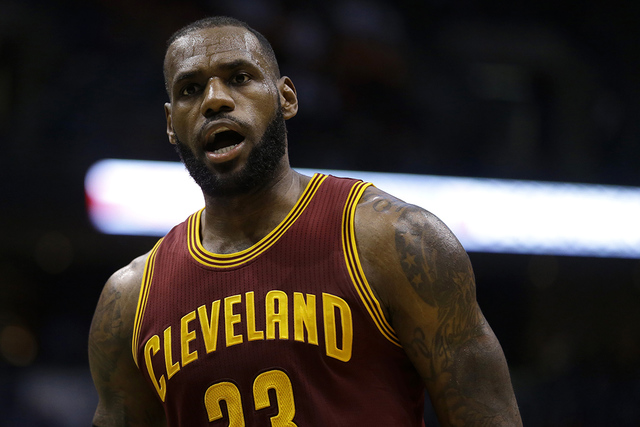 It’s not yet time to define Kevin Durant’s impact on the Golden State Warriors. Everything will be judged in June, not on Christmas Day.

The Warriors, despite some down moments, own the NBA’s best record (27-4). Durant seems to be developing chemistry with guards Stephen Curry and Klay Thompson, with each of the big three scoring more than 21 points per game.

A rematch of the past two NBA Finals — and a probable preview of the next one — highlights Sunday’s five-game schedule. The Warriors are 2½-point favorites over the defending champion Cavaliers in Cleveland.

The Cavaliers (22-6) are on a four-game win streak, but they are missing guard J.R. Smith, who’s out with a broken thumb. Golden State has won seven straight. No matter who wins this meeting, it’s not a statement game.

“I fully expect these teams to meet in the Finals,” Westgate sports book manager Jeff Sherman said, “but that’s not going out on a limb or anything.”

LeBron James is 3-0 in Christmas home games, including 2-0 with the Cavaliers. Sherman said he expects two-way betting action on the game.

“There will be enough support for Cleveland as a home underdog,” he said. “The Warriors are struggling here and there, and when people see that type of stuff, they do lose some faith.”

“Curry’s numbers have gone down. Curry seems like he’s going through the motions sometimes, and he’ll be there when he needs to be there,” Sherman said. “It’s 82 games of getting prepared for a postseason run.”

Using a 24-second shot clock, here’s a quick look at Sunday’s other games:

* Boston (-2) at New York: Only Derrick Rose thought the Knicks were going to be a superteam. Most thought they would be a .500 team. The first two months of the Rose-Carmelo Anthony-Kristaps Porzingis experient could be considered a success with the Knicks at 16-13. The Celtics (17-13) are getting big-time production from diminutive point guard Isaiah Thomas, who scoring 27 points per game. Boston has won seven of the past eight meetings with New York.

* Chicago at San Antonio (-9): If the season ended today, the Bulls (14-15) would miss the playoffs as the No. 9 team in the Eastern Conference. Chicago is Jimmy Butler’s team, but Dwyane Wade is still playing a strong second fiddle. Butler is averaging 24.4 points, and Wade is averaging 19. The Bulls have struggled badly at times. The Spurs, who whipped Golden State by 29 on opening night in late October, are No. 2 in the West at 24-6.

* Minnesota at Oklahoma City (-5): Predictions of the Timberwolves’ rise were premature. Minnesota (9-20) has been a major disappointment. Much was expected of a team of young stars led by Karl-Anthony Towns and Andrew Wiggins. Meanwhile, the Thunder (18-12) are making more noise than expected. Russell Westbrook has 14 triple-doubles this season and leads the league in scoring (31.8). Westbrook is shining now that he’s out of Durant’s shadow.

* L.A. Clippers (-6) at L.A. Lakers: At the end of November, the Lakers were 10-10 and full of optimism. First-year coach Luke Walton was praised. But December has been a disaster, with the Lakers posting a 1-12 record this month. The Clippers, 14-1 in the past 15 in this series, are without injured forward Blake Griffin and point guard Chris Paul has had a hamstring injury.