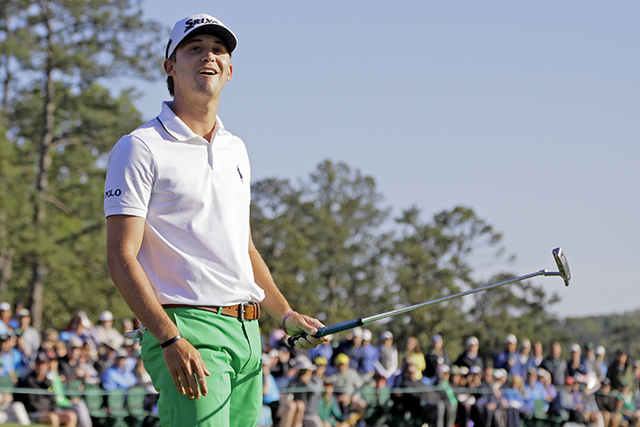 Smylie Kaufman reacts after missing a putt on the 18th green during the third round of the Masters golf tournament Saturday, April 9, 2016, in Augusta, Ga. (AP Photo/Jae C. Hong)

Just when it appeared Jordan Spieth might take a comfortable lead into the final round of the Masters, he slipped on a banana peel down the stretch and allowed a pack of players back into the race.

“It’s going to be a lot more interesting,” Westgate golf oddsmaker Jeff Sherman said. “Spieth was steady until the end. He brought everybody back into play.”

Fourteen players are within six shots of the lead, putting an element of drama into play today at Augusta National. Instead of a Spieth runaway win for the second year in a row, he and his betting backers will have to sweat out this one.

There is still an opportunity to get in on the action. Spieth is the 5-4 favorite on the adjusted odds board at the Westgate sports book, and several Las Vegas books will offer live wagering for the final round.

Spieth finished Saturday’s round with a bogey on the 17th hole and a double bogey on the 18th. He leads at 3 under par, one stroke ahead of Smylie Kaufman and two strokes ahead of Bernhard Langer and Hideki Matsuyama.

Kaufman, who earned his first PGA Tour win in the Shriners Hospitals for Children Open in Las Vegas in October, went into his first Masters at 250-1 odds. Sherman said the Westgate wrote eight tickets on Kaufman, whose adjusted odds are 12-1.

“If I had a ticket on anybody, I would want to have it on Spieth,” Sherman said. “But it wouldn’t surprise me if someone like Matsuyama wins. I would expect someone hovering a few shots back to make a charge.”

Jason Day, who won last year’s PGA Championship, and Dustin Johnson are lurking with Danny Willett three shots behind Spieth. Day’s adjusted odds are 6-1, Johnson is at 17-2 and Willett is at 20-1.

Las Vegas handicapper Brian Blessing (Sportsbookradio.com) has a ticket on Langer, but he said he’s more optimistic about Day’s chances.

“Day is Houdini, and he’s putting great,” Blessing said. “Johnson could be ahead. He could be 5 under. He was missing putt after putt by a millimeter.”

Rory McIlroy started Saturday one shot behind Spieth and finished an erratic day five back. McIlroy, who has won four majors but no Masters, failed to card a birdie on the way to a 77.

“I’m surprised about McIlroy. He made so many mistakes,” Sherman said. “I don’t know what’s missing for him.”