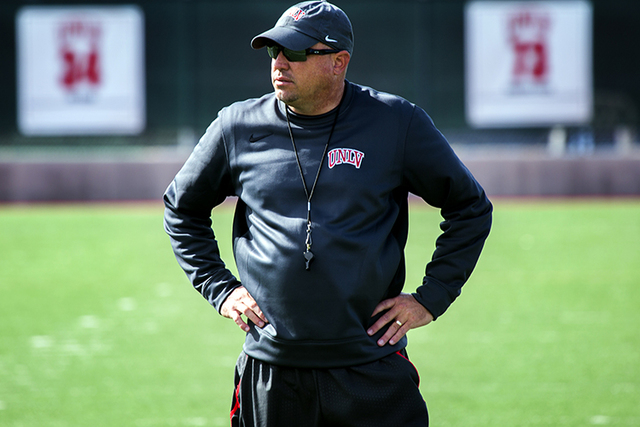 At the conclusion of spring practice, Johnny Stanton had done nothing to indicate that UNLV is about to unleash the next “Johnny Football.” By the fall, maybe that will change.

A lot needs to change at the quarterback position for the Rebels to deliver on the promise many of us believe we see coming under coach Tony Sanchez. The 3-9 record Sanchez produced in his first season was a positive sign, and that’s no joke or even a slight shot of sarcasm.

“This time last year,” Golden Nugget sports book director Tony Miller said, “we were not sure what to expect from Sanchez in his rookie season and with the team being down and out.”

Now, we expect more from Sanchez, mostly because he has shown he can recruit at a relatively high level and knows how to run a college football program. A year ago, he was making the leap of faith from Bishop Gorman High School, and a UNLV program with nothing to lose was in position to gamble.

Sanchez won three games, including an upset of UNR in Reno, to top the oddsmakers’ projection of 2½. He accomplished it while rotating two quarterbacks and getting uninspiring play from both.

A quality college team without a playmaker at quarterback is a Corvette with an empty gas tank. It’s going nowhere fast. Sanchez will field a better, deeper team in 2016, but does he have a quarterback to press the gas pedal?

In April, Sanchez fooled no one by listing Stanton and junior Kurt Palandech, who completed 49 percent of his passes last season, as co-starting quarterbacks on the depth chart. Stanton will be No. 1 in the fall. A sturdy 6-foot-2-inch, 245-pounder, Stanton did not blow away Sanchez or anyone else in the spring. But he’s got the credentials and potential to inspire hope, even if he’s not the Mountain West’s version of Johnny Manziel.

“If there’s not a quarterback upgrade, UNLV is going to have trouble,” said Bruce Marshall, handicapper for The Gold Sheet.

Marshall (Goldsheet.com) also questions if the defense is vastly improved, if the offensive line can pave running lanes and protect the quarterback, and if a young team can learn how to close out close games. It’s smart to be skeptical.

“Those are big ifs that have been mostly negative answers for the Rebels in recent years,” Marshall said.

But this is a new era with a new quarterback, and Miller is taking a more optimistic view. He recently posted UNLV’s regular-season win total at 4½, and when the Golden Nugget opens lines Tuesday on all 12 games, the Rebels will be favored six times — and that is no joke, either.

“I’m excited about it. Sanchez is going to take the Rebels slowly to the top of the conference,” Miller said. “I think from this point forward, you’re going to see that UNLV win total rise.”

The Rebels should pick up two wins without much problem. Miller made UNLV a 28½-point favorite over Jackson State in the Sept. 1 season opener. The Tigers of the Southwestern Athletic Conference no longer have a running back as talented as Walter Payton.

The Bruins, who routed the Rebels 37-3 last year in Las Vegas, feature one of the nation’s finest quarterbacks in sophomore Josh Rosen. Unfair as the comparison might be, we’ll see how Stanton stacks up with a future NFL first-round draft pick.

The Mountain West is weak and not what it used to be, and that’s the good news for UNLV. The bad news is Boise State and San Diego State are still strong. The Rebels are opening as 20-point road ’dogs against the Aztecs and 24-point road ’dogs to the Broncos.

In October, UNLV is a 1-point underdog in a coin-flip game at Colorado State and a 10-point ’dog at San Jose State. There are plenty of winnable games for the Rebels in Mountain West play, but only if their quarterback is a real playmaker.

“I’m not high on the league, which has really taken a wrong turn,” Marshall said. “But I think five wins is a little aggressive, so I might lean under that number without knowing the quarterback situation.”

Here’s what we know about Stanton: He can run and throw, with an emphasis on throw; he can bench press 400 pounds; he was Nebraska’s third-string quarterback in 2014; he chose the Cornhuskers over Oregon and Wisconsin; he led his high school team to the California state title as a junior; and he accounted for 39 touchdowns last season for Saddleback College in Mission Viejo, California.

He also will be surrounded by skilled playmakers in running back Lexington Thomas and wide receivers Devonte Boyd and Kendal Keys.

So, if the quarterback delivers, UNLV might actually deserve to be favored in six games, which is a dramatic change and a credit to Sanchez.