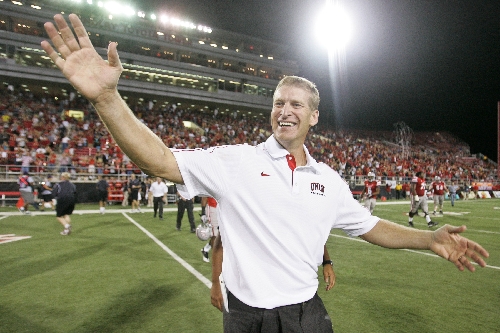 Not that the Rebels are great – or even good - at Sam Boyd Stadium, but they’re much better there than just about any time they leave Clark County.

Coach Bobby Hauck said Monday the only differences between playing at home and on the road are the flights and the crowd noise.

“So my take on that is if you’re good enough, you’ll win – home or road,” he said. “So if we’re good enough and we play well enough, we’ll win. There’s really no rhyme or reason to why you would not play well on the road. Good teams win on the road.”

The Rebels will have their chances to prove him right. Four of their next five games are out of town, and UNLV should be a substantial underdog in each one.

u25B6 Utah State is a 17-point favorite, and the Aggies are a missed field goal at Wisconsin from being unbeaten. The Aggies average 424.2 yards a game, and their defense hasn’t allowed any first-quarter points or a first-half touchdown.

u25B6 Louisiana Tech (Oct. 6) runs a high-powered offense that averages 54.7 points, having scored at least 50 in all three games to begin 3-0. The Bulldogs are coming off a 52-24 victory at Illinois, and are averaging 536.7 yards per game.

u25B6 No. 24 Boise State (Oct. 20) wasn’t impressive in a 7-6 win over Brigham Young on Thursday to improve to 2-1, but the Broncos were the overwhelming choice to win the Mountain West Conference. They lead the league in scoring defense, allowing just 11.7 points.

So UNLV has a daunting challenge to secure any win against that bunch. Perhaps the more important issues are whether the Rebels will be competitive and what condition they will be in mentally for a finishing kick against much weaker opponents and the opportunity to pick up some late-season wins.

UNLV enters this stretch with a possible boost after Saturday’s 38-35 upset victory over Air Force.

“I feel like it helps our team to have more confidence,” running back Tim Cornett said. “Confidence plays a big role in any sport you play.”

Hauck never offers an explanation as to why the Rebels struggle so badly on the road. Perhaps no real reason exists, other than playing away games has created a mental block.

“The only people making tackles and blocks are the 11 that are out there,” Hauck said.

■ NOTES – UNLV linebacker Tani Maka was named Mountain West defensive player of the week. He made 10 tackles and recovered the fumble in the third quarter that turned around the game against Air Force. … Utah State running back Kerwynn Williams, a Valley High School graduate, was chosen Western Athletic Conference offensive player of the week. He rushed for 205 yards and touchdowns of 26 and 58 yards in a 31-19 victory at Colorado State. … The Aggies are asking fans to wear white Saturday for a “white out.”