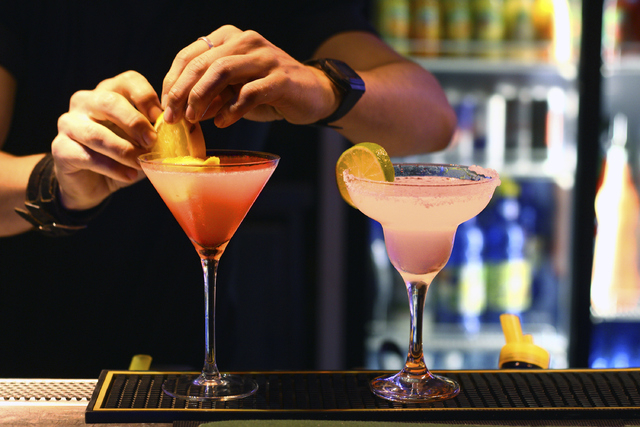 When it’s 2 a.m. in a Las Vegas club, there’s one man who’s sober and he played a major role in creating a sea of inebriation.

Well, it’s what he’s paid to do. He’s the bartender.

Bartending across the country is made unique by the drinks, the atmosphere, the clientele and the circumstance. And that’s no different in Vegas.

“This really is the best city to be a bartender,” said a bartender for a club on the Strip. “The experiences you have working on the Strip are some you can’t get anywhere else.”

Being a bartender in Las Vegas requires different skills for different locations. The ever-changing city is home to hundreds of bars and liquor-serving establishments.

There are the Strip bars including clubs, casino bars and daiquiri stands. There’s the constantly shifting downtown with their mainstay, mob-tied hotels, Fremont East dive bars and newer hot spots such as the Gold Spike and Downtown Cocktail Room. And then there’s everywhere else – the run-down dive favorites, neighborhood watering holes and the chain gaming bars such as Dotty’s and The Lodge taverns.

Bartending on the Strip means serving “The Hangover generation” as one bartender called it — where younger tourists come with an overexaggerated idea of Las Vegas and abuse alcohol to reach that level of “epicness.”

On big nights, some Strip bartenders work so quickly it’s like watching an audition for a role as “The Flash.” These bars will make anywhere from 10,000-30,000 drinks in a 24-hour period.

“The funniest part about my job is the things I’ll get offered instead of money,” Johnny said. “Drugs, casino tips, various kinds of sex, casino vouchers, hotel and buffet coupons. You name it. It’s a cliché, but drugs and sex work a lot.”

The last few years saw an increase in visitors to the formerly avoided area of Downtown and Fremont East. Now with 14 bars within a mile of each other, the area has emerged as a still fun, but more relaxed place to get equally as inebriated.

The bartenders have a different attitude about bartending in downtown compared to the Strip.

On a busy night, there may be a show happening inside Beauty Bar, singles are mingling in The Griffin or Park on Fremont or people are satisfying their late night cravings at Le Thai.

“I used to work on the Strip, at one of the street-side bar kiosks. Now I work down here and it’s a lot more chill, more relaxed. Younger, you know,” said Eric, a Fremont bartender.

Eric, who worked in a Fremont Casino before Fremont East started picking up, said he welcomes the changes being made by the Downtown Project and the people it’s bringing it.

“There’s gonna be a—holes in every job, but my customers — especially my regulars — make me really love my job,” he said. “People around here make great conversation.”

At Atomic Liquors, a historic bar recently acquired by the Downtown Project and a few blocks east of the downtown hub, a tall, bearded man in a flannel shirt named Matt may be your bartender, and he quite enjoys it.

“I like creating cocktails and an experience for somebody. I like the social aspect, but more than anything else, I like picking the right beer for the guest or creating a cocktail and thinking, ‘is that what they’re in the mood for?’ or is it something else that’s refreshing, or a spirit, or a sour,” he explained.

“Sometimes I’ll find myself glimpsing to see their reaction and if its a good one — that’s what gets me really excited because I know how it feels to be looking all day long for one thing and never getting it. You go out for hearty meal and you weren’t satisfied, so for the rest of the day it’s never quite right. I like being the ‘quite right.’”

Despite the differences in attitude or locale, there’s one thing bartenders in Las Vegas have in common: tips. And a lot of them. “My paychecks put me at around $18,000, but my tips threw that way over $30,” says a downtown bartender. “The tips are a great bonus to actually bartending.”