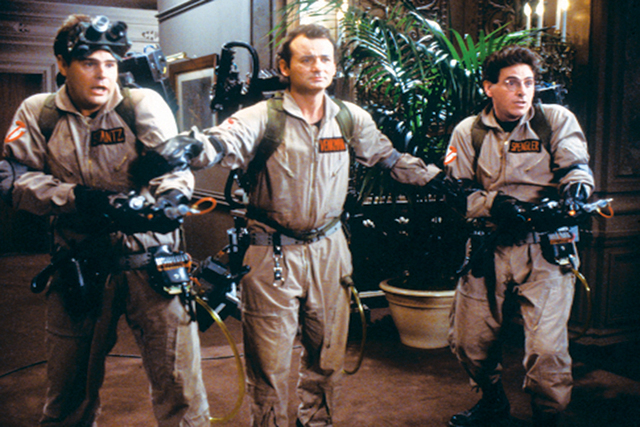 Dan Aykroyd, left, starred with Bill Murray and Harold Ramis in "Ghostbusters." The actor has an interest in the paranormal. (Courtesy)

Hillary Clinton, Dan Aykroyd and Joe Walsh have expressed interest in UFOs, so what does UFO expert George Knapp think about famous believers and UFOs?

We posed these questions to Knapp, because he’s reported on sightings, believers and the paranormal for decades as an investigative reporter for KLAS-TV, Channel 8, and a co-host of the “Coast to Coast AM” radio show.

■ Blink-182’s Tom DeLonge is a “hard-core believer” in UFOs and has launched investigative books, films and merchandise under the name Sekret Machines.

“A lot of his fans are mad. They think he left Blink-182 in order to chase aliens,” Knapp said.

■ Comedian George Carlin befriended Knapp in the 1980s, sending Knapp videos of his act, and Knapp sending Carlin tapes of UFO stories he did for TV.

“I had a secret correspondence with George Carlin until the day he died. Every time we’d get together, we’d talk about UFOs,” Knapp said.

■ Walsh, solo singer and Eaglesguitarist “listens to the radio show, sometimes calls in, doesn’t say who he is, just, ‘Joe from Arizona.’”

■ Aykroyd “is like an encyclopedia on UFOs and everything paranormal, poltergeists, Bigfoot and crop circles.”

■ British singer Robbie Williams “invited me to come to his house in Beverly Hills and spend a weekend, and just kind of give him a briefing.”

■ The late Nevada Sen. Howard Cannon helped Knapp a lot “in trying to crack some of these mysteries.”

“There are a whole bunch of elected officials whose names would be very familiar to your readers who are deeply interested in this topic, but don’t want to talk about it in public.”

“Hillary Clinton has been interested in UFOs behind the scenes for 25 years,” Knapp said.

“The number of people who would vote on the UFO disclosure issue, I think, would be pretty small. But somehow, either a focus group, or a survey, or something (must have convinced her campaign) it’s a net positive for them to talk about it.”

What’s the truth out there?

Knapp’s opinions are informed by Utah’s Skinwalker Ranch, a development that came out of the National Institute for Discovery Science, a board of former CIA people, astronauts and senators.

“It’s been sort of a Disneyland of paranormal stuff,” he said.

“They had a team of scientists on this ranch for seven years, 24-7, cameras, all kinds of sensing equipment.

“The scientists had so many bizarre experiences, it affected their lives,” Knapp said.

“It seemed to me the phenomenon included UFOs, poltergeists, Bigfoot, crop circles, invisible entities, I mean everything you can name, and it just seemed to toy with the scientists and with the people who lived on the ranch.

“It was as if this phenomenon was trying to tell us all this stuff is intertwined, somehow, and it’s up to us to figure it out.

“It suggests to me, whatever it is, this intelligence, it lives here. It’s not from somewhere else. It’s been here forever, maybe longer than us. It interacts with humans in different ways, sometimes benign, and sometimes pretty nasty.

“If you’re asking me if there’s ever going to be disclosure, I do not think that.

“There’s no way the president can ever say, ‘Yeah, we’ve got aliens visiting, and we don’t know where they’re from or why they’re here.’ People would freak.

“I don’t think the public is ready for what I suspect the ultimate truth might be.”

Aerosmith singer Steven Tyler saw the revamped “Love” show at The Mirage on Thursday, then took photos with cast and Giles Martin, son of the late Beatles producer George Martin.

Instagram and Twitter star Christian Delgrosso partied with friends at Marquee Dayclub in The Cosmopolitan on Thursday, then ate at Tao restaurant.