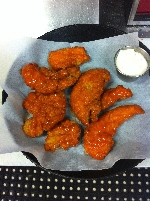 PICK OF THE WEEK:

Everyone has their favorite style of barbecue, and Kentucky style is what you will find at Dot’s. That means a little paprika, dry mustard, catsup, Worcestershire sauce, onion powder and a few other secret ingredients. Enjoy it on ribs, chicken, Angus links, fried fish and beef brisket. Dinners come with two sides (collard greens, black-eyed peas, yams, macaroni and cheese, cabbage, potato salad or beans). Among the sandwiches are barbecue chicken pita, grilled ham and cheese, Jordy’s Special (chicken fingers with Swiss and American on grilled pita with lettuce, tomato and mayo) and one-third pound hamburgers featuring the Coney served on a steamed bun with chili, mustard and onions. Several salads are crispy chicken and Greek with tomatoes, cucumbers, Greek olives, beets, red onions, peperoncinis and feta. Popular breakfasts include omelets, French toast, breakfast burritos and the Southwestern Breakfast Bowl with fried potatoes, scrambled eggs, salsa, cheddar and Jack cheeses, choice of ham, bacon or sausage and flour tortilla. There is also chili con carne, chicken wings and chili cheese fries. Ask for Dot: She has a surprise for you. Dinners begin at $7 and breakfast at $2.99. Dot’s Southern Kitchen is open daily from 8 a.m. to 11 p.m. – Jack Bulavsky