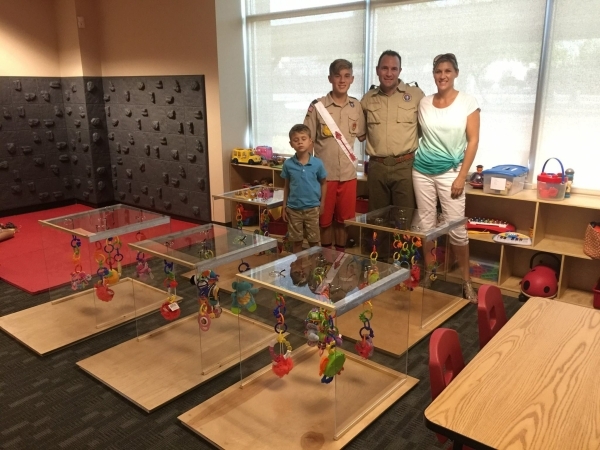 Rocco, Blaise, Tom and Marci Berenato stand in a room full of Little Rooms at the Nevada Blind Children‘s Foundation offices at 9330 W. Martin Ave. Blaise was inspired by his little brother to create the Little Rooms for his Eagle Scout service project. (Special to View) 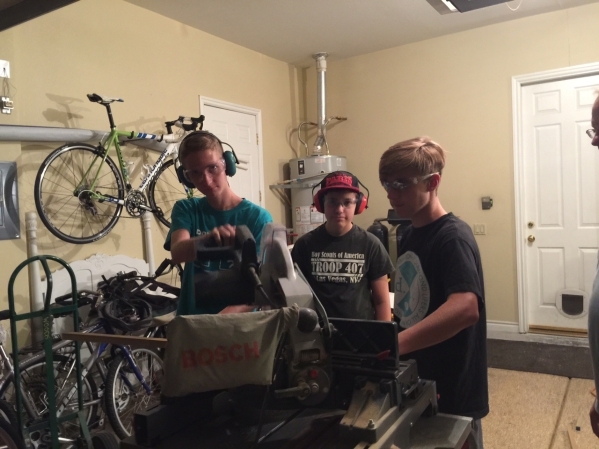 When Las Vegas 7-year-old Rocco Berenato was born, his eyes were crossed.

For a while, doctors thought he had strabismus, a muscular disorder that prevented his eyes from aligning correctly.

Finally, a retinologist realized the problem wasn’t tied to the muscles. It was familial exudative vitreoretinopathy, commonly called FEVR, a condition that impacts the retina, eye fluids and blood vessel formation.

“Essentially, in the back of the eye, the vessels are abnormal, which leads to a hardening of the retina,” said Rocco’s father, Tom Berenato.

Not long after, the family — which includes Rocco’s mom, Marci, Rocco’s twin Bella and 15-year-old twins Blaise and Brooke — was on vacation in New Jersey when both of Rocco’s retinas detached. He underwent 13 surgeries to try to reattach them, but none of them worked.

“He lost all his vision at 3 years old,” Tom said.

“They were our only resource,” Tom said. “They gave us the tools we needed.”

Now he describes Rocco as “an otherwise normal, brilliant kid.”

Rocco’s big brother Blaise said his little brother inspires him. Rocco is reading at a fifth-grade level and typing in Braille and working math in his head and with the help of an abacus.

Rocco’s achievements haven’t gone to his head, and he doesn’t seek publicity; in fact, he jokingly insists reporters “talk to his agent.”

The family was so grateful for the Nevada Blind Children’s Foundation’s help, Tom joined the foundation’s board. And when it came time for Blaise to select an Eagle Scout service project, he went to foundation executive director Emily Smith and offered his services.

Smith suggested Blaise lead the construction of a Little Room.

The Little Room was conceived in 1981 by Danish doctor Lilli Nielsen to provide developmental stimulation in a safe environment for visually impaired infants and toddlers. Typically made of PVC pipe and peg board, a Little Room has three walls and a ceiling suspended over a resonance board. Toys with different textures and noise-making qualities are strung from the ceiling. Babies are placed inside on the resonance board with a blanket or cushion beneath them. The surrounding walls muffle sound from the outside and allow the baby to concentrate on finding and playing with the toys.

Smith said most babies and toddlers feel comfortable in small places reminiscent of the womb. Children who have the use of their eyes frequently try to reproduce that cozy, safe environment by building blanket forts or playing in closets or cupboards.

Smith said Blaise put a new twist on the room by building it out of plexiglass instead of the usual pvc and peg board. She said that’s great because parents can see through it.

“This gives kids time on their own,” she said. “Parents can get a good visual, but it creates that barricade, so parents aren’t always handing the toys to the child. It lets the child reach out on their own and understand that spacial reasoning.”

Little Rooms can be purchased on the Internet, but they’re usually at least $800 each.

Blaise recruited a team of more than 30 volunteers from his Boy Scout Troop 407 and from the troop’s sponsoring organization, the Palo Verde Ward of the Redrock Stake of The Church of Jesus Christ of Latter-day Saints, which meets at 10550 Alta Drive. He convinced Peterman Lumber, 5625 Arville St., and Welch Plastics, 4080 W. Desert Inn Road, to donate many of the necessary materials, and he collected monetary donations from friends, family and church and troop members to pay for the rest.

Blaise said the project, which consumed his life for well over 200 hours, was a ton of work but worthwhile. Smith appreciates the teen’s efforts.

“It’s important the community understands how much effort went into Blaise’s project and into all of his experience as a Boy Scout,” she said. “This is just the culminating point in a long history for this kid.”