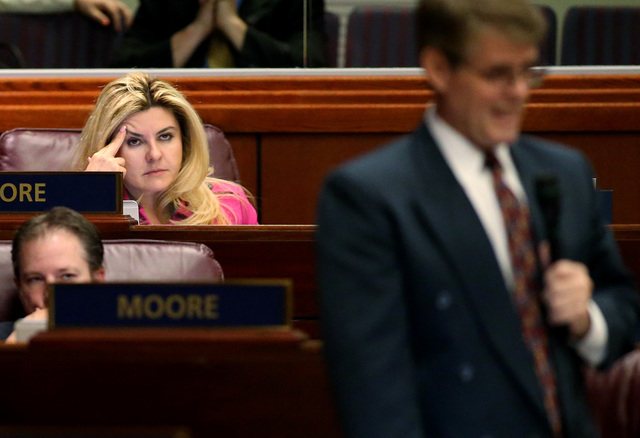 Personalities trumped policy yet again in the Assembly last week when Assemblywoman Michele Fiore lost her temper with a GOP colleague during a hearing on her “Cliven Bundy” bill.

Assemblyman Chris Edwards, who was in the midst of asking several questions about an amendment to Assembly Bill 408 during an early evening floor session Tuesday, was interrupted by Fiore.

When Edwards made yet another vague reference to conservative anti-tax political activist Chuck Muth during his questioning on several bills up for a vote during a lengthy floor session, Fiore had had enough.

She asked Speaker John Hambrick, R-Las Vegas, to put a halt to Edwards’ statements, adding to Edwards: “Sit your ass down.”

The comment caused a momentary shock, an Assembly recess and then, an apology from Fiore to Edwards.

Edwards was not impressed with the apology.

AB408 was a priority for Fiore, who is a Bundy supporter and who brought the Bunkerville rancher to Carson City for a hearing on her bill. As originally written, the measure would have asserted state control over most public lands in Nevada.

The genesis of the bill was the BLM’s unsuccessful efforts to round up cattle belonging to Bundy in 2014 that resulted in an armed confrontation between federal agents and Bundy supporters.

When legislative legal staff said the measure was unconstitutional, the bill was amended to set forth requirements for local law enforcement to work with federal agencies.

On Tuesday, Fiore tried and failed twice to add amendments to the bill. In a final vote, the measure failed on a 34-8 vote.

Fiore and Edwards have a history of animosity.

Edwards said before the 2015 session began that Las Vegas police were investigating allegations of attempted extortion in exchange for his vote for Assembly speaker. The investigation is ongoing.

Both Fiore and Assemblywoman Victoria Seaman, R-Las Vegas, early in the session questioned whether Edwards was wearing a “wire” in caucus meetings, a claim that the lawmaker denied.

The shocking Republican takeover of the Assembly in the Nov. 4 general election resulted in chaos for the 25-member caucus, with an internal fight for leadership between more moderate members of the group and tea party conservatives.

The moderates won out, and Fiore was deposed as both majority leader and chairwoman of the Assembly Taxation Committee.

The most divisive issue in the caucus is Sandoval’s call for $1.1 billion in new and extended taxes to boost funding for public education and balance his $7.3 billion general fund budget.

Fiore said she does not support the bill, nor does she like an alternative presented by some members of the Assembly GOP caucus.

There have been other incidents in the caucus this session, including a confrontation between conservative Assemblyman John Moore, R-Las Vegas, and Majority Leader Paul Anderson, R-Las Vegas, which led to the filing of a report with Legislative Police by Moore. The two later made up.

More recently, Seaman complained about comments made by Judiciary Chairman Ira Hansen, R-Sparks, after a dispute over her homeowner’s bill of rights measure that did not get a vote in the committee.

Welcome to “As the Nevada Legislature Turns.”