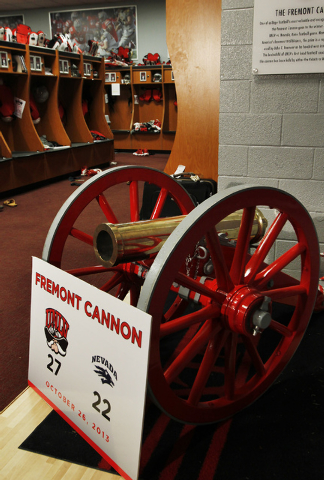 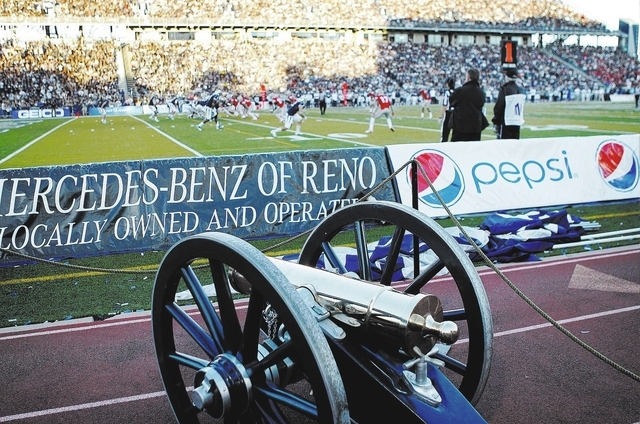 The Fremont Cannon trophy sits next to the field at Mackay Stadium during the big rivalry football game between UNLV and UNR in Reno on Oct. 26, 2013. (Jason Bean/Las Vegas Review-Journal) 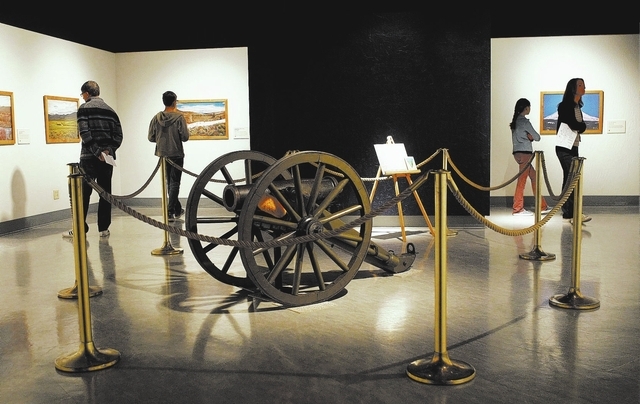 The Sturm family from Carson City explores the original Fremont Cannon exhibit at the Nevada State Museum in Carson City on Oct. 25, 2013. The photos on the walls show locations where John C. Fremont and his team camped at during their travels though Nevada and Oregon. (Jason Bean/Las Vegas Review-Journal) 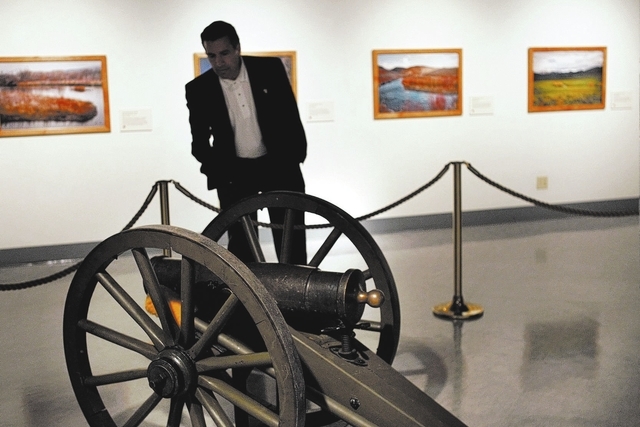 Governor Brian Sandoval checks out the original Fremont Cannon exhibit at the Nevada State Museum in Carson City on Oct. 25, 2013. The photos on the wall show locations where John C. Fremont and his team camped at during their travels though Nevada and Oregon. (Jason Bean/Las Vegas Review-Journal) 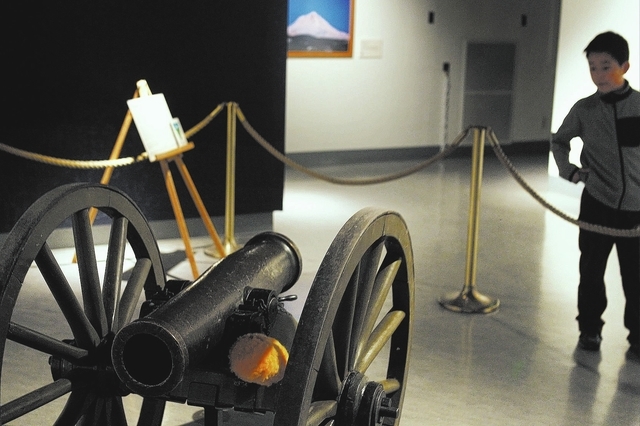 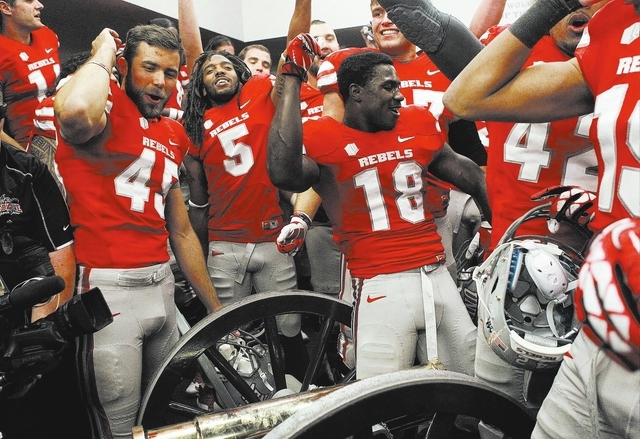 UNLV players dance over the Fremont Cannon as they celebrate their victory over UNR at Mackay Stadium in Reno on Oct. 26, 2013. (Jason Bean/Las Vegas Review-Journal) 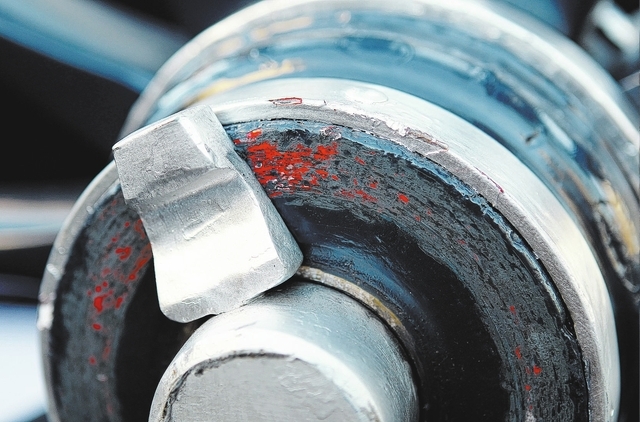 A little bit of old red paint shows through the Nevada blue on the Fremont Cannon trophy during the first annual "March from the Arch" rally and parade the day before the big football rivalry game between UNLV and UNR in Reno on Oct. 25, 2013. Tradition holds that the winning team gets to paint the cannon it's school's color. (Jason Bean/Las Vegas Review-Journal) 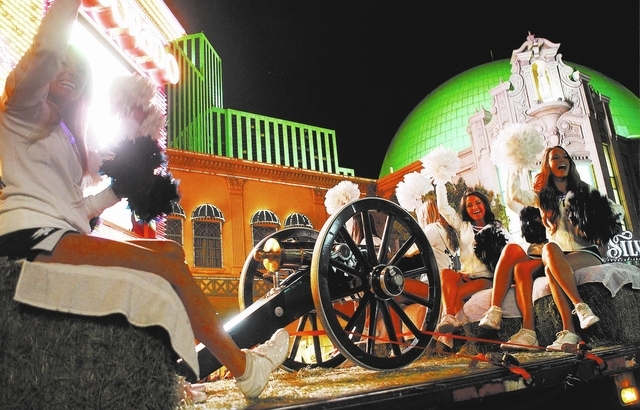 UNR cheerleaders help escort the Fremont Cannon trophy from downtown Reno to the quad on UNR's campus during the first annual "March from the Arch" rally and parade the day before the big rivalry football game between UNLV and UNR in Reno on Oct. 25, 2013. (Jason Bean/Las Vegas Review-Journal) 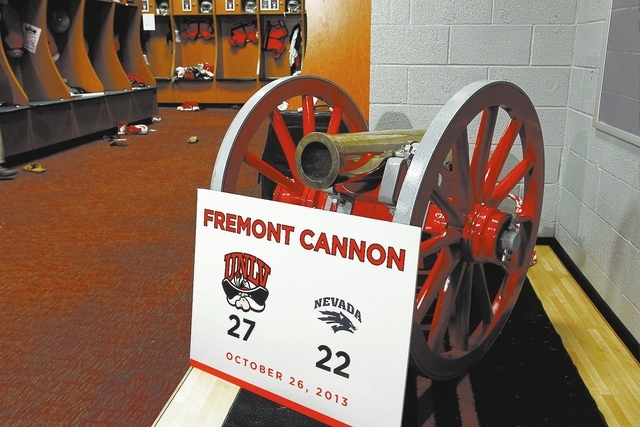 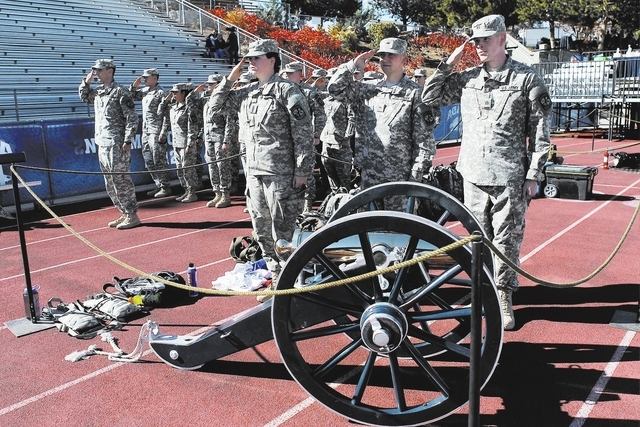 Members of the University of Nevada Reno's ROTC stand at attention while guarding the Fremont Cannon trophy before the start of the big rivalry football game between UNLV and UNR in Reno on Oct. 26, 2013. (Jason Bean/Las Vegas Review-Journal)

Is the cannon that explorer John C. Fremont dumped in the Sierra Nevada in 1844 still lost in the West Walker River, or is it sitting on an exhibit floor at the Nevada State Museum in Carson City?

Gene Hattori, curator of anthropology at the museum, is “75 percent sure” his museum has the 223-pound barrel of the cannon Fremont hauled through Oregon, Nevada and a few miles into California before abandoning it in the snow. Kit Carson, Fremont, his voyagers and their horses were exhausted from trying to pull the cannon through the mountains. They dumped it so they could survive a 160-mile struggle through the snow to Sutter’s Fort in Sacramento, Calif.

History buffs, explorers and treasure hunters continue to search the riverbeds north of Bridgeport, Calif., for “the lost Fremont Cannon,” which Hattori described as priceless if it exists.

Their searches have not been futile. A group of Bay Area professors who call themselves the Fremont Howitzer Recovery Team have found three steel wheel rims. They also have found a piece of metal that was used to lift and lower a cannon barrel. Hattori has no doubt those parts came off the carriage holding the actual Fremont Cannon.

Fishermen over the years have sworn they have stepped on the cannon’s barrel while wading in the water. But when they returned with friends to make the recovery, nothing has been found.

Hattori is preparing for a nearly yearlong museum celebration to display the discovered parts starting Jan. 29 — the 170th anniversary of the abandonment of the cannon — along with their Fremont Cannon.

What’s different about this Fremont Cannon display is the barrel now sits on a 400-pound carriage, not on a block of mahogany as it sat for generations. And what will surprise visitors is how tiny the cannon is, only about three feet tall.

Until recently, the cannon barrel had been loaned to the Deschutes County Historical Museum in Bend, Ore. The museum equipped the cannon with a carriage from an 1851 gun.

William Rowley, a professor of history at the University of Nevada, Reno, has no doubt that the Fremont Cannon barrel remains lost in the Sierra Nevada.

“He lost it crossing the mountains,” said Rowley, who has written on Nevada and Western history and edited the Nevada Historical Quarterly. “They might eventually find it, but I doubt it.”’

But even Gov. Brian Sandoval tweeted Oct. 25 that he has just visited the “original Fremont Cannon,” probably because that’s what Peter Barton, administrator of the Division of Museums and History, tells everyone.

Hattori said the Fremont Cannon makes a great symbol of Fremont, whom he describes as “an icon of Nevada” important to both Northern Nevada and Southern Nevada and Western history.

“We were familiar with John C. Fremont the explorer from our grade school classes,” added Hattori, who grew up in Sparks.

Fremont is virtually Nevada’s father, the man whose maps and journals opened the West to California’s ’49ers, the Mormons who settled Salt Lake City in 1847 and Nevada’s Comstock Lode silver and gold hunters in the 1860s.

Fremont led several expeditions into the West and, on his 1843-44 journey, named Pyramid Lake, the Humboldt River and the Carson River.

His expedition saw Lake Tahoe from a nearby mountaintop. After abandoning the cannon and leaving California when the weather warmed, they traveled through Southern Nevada

They stopped on May 3, 1844, at “a camping ground called Las Vegas, a term which the Spaniards use to signify fertile or marshy meadows.”

Fremont was his own man. He wasn’t supposed to have a cannon with his expedition, and never fired it because of hostilities during his journey.

Nicknamed “The Pathfinder,” Fremont’s journals and maps became best-sellers in the 1840s. He would become the first presidential candidate of the anti-slavery Republican Party in 1856, the first military governor of California, a Civil War general and the territorial governor of Arizona.

As a general in 1861, Fremont declared the slaves free in Missouri, two years before the Emancipation Proclamation. President Abraham Lincoln relieved him of his duties.

Hattori said the odds are the museum cannon is genuine because Fremont himself said he thought it was his cannon when he visited Virginia City in the 1880s. The cannon then was housed in a firehouse. It had been found in Antelope Valley, Calif., in 1850. Over the years, the cannon was moved to Glenbrook, where it was fired during the July 4 celebration. The Bliss family donated it to the state museum in 1941.

“I am not 100 percent certain ours is the Fremont Cannon,” Hattori said. “But there were only 12 or 13 of this model made. The odds are pretty good in our favor.”

What is clearly known is that the museum cannon was one of 13 manufactured in Boston in 1837.

Hattori said a drawing of the cannon made in 1841 at Pyramid Lake by Fremont’s cartographer, Charles Preuss, shows a slightly different, more colorful cannon. But he said it appears someone added embellishment to the cannon portrait, possibly to improve its appearances for publication purposes.

The Fremont Cannon trophy — which weights 545 pounds — was built in 1969 by Kennecott Copper Co. for $10,000 and donated to the university system for the annual Battle of Nevada game.

If the barrel is eventually found near where the parts have been discovered, then Hattori said it would become “the property of the United States.” Any buyer would have to keep their purchase secret.

“There are a lot of Fremont freaks out there who would pay for the barrel.”