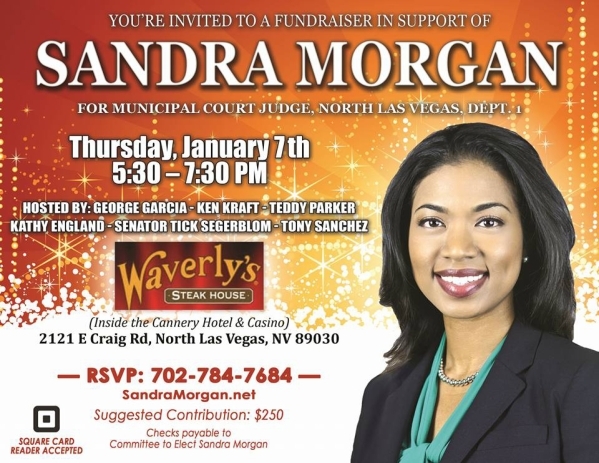 A flier for a fundraiser to elect North Las Vegas City Attorney Sandra Morgan to a Municipal Court judge seat in the event the Nevada Supreme Court allows a recall of the sitting judge to proceed.

How much money? No one knows, and Morgan could continue to rake in unreported cash for months.

That’s because her campaign — despite seeming to be in full swing with billboards dotting the valley and politically juiced mixers being held often — hasn’t officially started.

Morgan’s run for judge is contingent on a recall effort going through for the seat she wants. The recall — being spearheaded by the political consultant who also is running Morgan’s campaign — is against Municipal Court Judge Catherine Ramsey. Ramsey has challenged the recall and is waiting for a ruling from the Nevada Supreme Court, which heard arguments on the case in October and isn’t bound to a timeline on its decision.

Morgan’s fundraising falls into an unusual space when it comes to campaign finance reporting laws. It even took the Nevada secretary of state’s office more than 11 days to get back to the Review-Journal with an answer as to whether Morgan needed to report the money she was bringing in. It concluded, after consulting the Nevada attorney general’s office, that she doesn’t need to report what she has raised yet, Deputy Secretary of State for Elections Wayne Thorley said.

The recall has loomed since 2015. So if the recall election is called, that could mean a large dump of campaign finance data.

Morgan’s campaign has a strong public presence, and Ramsey filed campaign finance reports in January, but there could also be unknown candidates raising money to make a run at the recall who would not be known until the election is called and they petition to be on the ballot.

Recall elections are designed to have a quick turnaround. Should the recall be deemed valid by the Nevada Supreme Court, the clerk would have between 10 and 20 days to issue a call for the election. The election would happen 30 days after that call.

“This is a very unique circumstance related to recall elections, and it’s unique in the fact that this drug out so long because we are waiting for the Supreme Court to rule on it,” Thorley said, citing the state law that says special election candidates must file campaign finance reports four days before early voting starts.

Election law lawyer Bradley Schrager said the issue was fascinating and, looking at the letter of the law, no reporting would be required. There is a statute that expressly deals with recall campaign finance reports, and that statute sets a reporting schedule that starts four days before early voting.

If the recall is thrown out because of a court challenge, campaign finance reports must filed 30 days after the court decision, he noted.

Recalls are supposed to happen at a brisker pace, he said.

“I don’t think we have ever encountered the idea that there would be this enormous suspension of the election process. That’s what’s really thrown all of this off,” Schrager said. “No one would have thought of this situation when they were drafting these statutes.”

Pete Quist, research director at the National Institute on Money in State Politics, said the idea behind campaign finance disclosure is to make sure candidates are held accountable to the public.

Seeing who is donating to a campaign can give the public valuable clues about candidates. Who supports them might give a window into what they will support when elected, he said.

“The voting public has a right to know who is backing each of the candidates,” Quist said.

The full extent of her war chest is unknown, as all that is public now is money donated from other campaigns that would have had to report their donations to Morgan.

A flier for an August fundraising event shows a $100 minimum donation.

In September, Morgan had a pancake breakfast where attendees were asked to make a $25 or $50 donation.

She also had a meet-and-greet, which suggested people make a $100 donation to her campaign, and on Jan. 7 she threw a fundraiser at a steakhouse, for which the flier suggested $250 contributions.

Morgan campaign manager David Thomas said her campaign looked at the reporting requirements and is following the reporting schedule laid out by the law.

Ramsey has a website devoted to fighting the recall. It is accepting donations.

Ramsey raised about $20,000 last year, according to her year-end contribution and expenses report. She loaned about $14,000 of that money to her own campaign and spent the same amount raised, the report said. About $10,500 was spent on consultation with a law firm. About $2,400 was spent on a hearing transcript related to the recall, she said. Ramsey said the money raised was for her current position.

The recall effort against Ramsey started in March, and the petition was submitted in May.

The recall committee has accused Ramsey of taking an excessive number of days off, misappropriating city funds to pay for a private lawsuit, and asking employees to perform personal errands on city time.

Ramsey has argued the recall is political payback because she dismissed cases because technical errors, depriving the city of revenue, and fought to preserve court funding that the city wanted to take for other uses. The city had denied involvement in the recall.