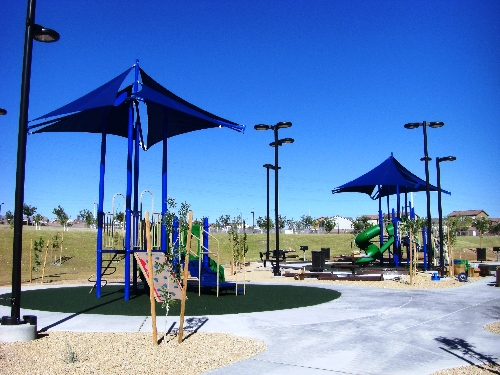 The holidays come early for Providence residents and community neighbors today with the grand opening of Knickerbocker Park in the northwest Las Vegas master-planned community.

The public is invited to the 2-5 p.m. celebration, which will culminate in fireworks by Pyrotecnico, a fireworks show by one of the country’s most creative fireworks display, pyrotechnics and special effects companies.

Festivities also will include entertainment by Tony Marques, a country music favorite, and his band; refreshments and brief remarks by park development principals.

Tony Marques has developed a strong local following from performances as the house band at Toby Keith’s I Love This Bar and Grill located at Harrah’s Las Vegas and other area venues, and for opening for some of the top country music performers.

There also will be a ceremonial first pitch as well as a fast pitch contest between the new Providence mascot, who will be announced, and Cosmo, the Las Vegas 51’s mascot. This complements Providence’s small town ambiance and mirrors the park’s groundbreaking last year.

The day marks the official opening of Knickerbocker Park so attendees will enjoy all the park amenities, including play areas for 2- to 5-year-olds and 5- to 12-year-olds, swing set, dog park with small and large dog areas, splash pad, youth baseball field, multiuse events field, jogging path with exercise stations and picnic areas.

The $2.2 million neighborhood park has been built by the Providence Master Homeowners Association in collaboration with residents, Providence Park Committee, city of Las Vegas and Focus Property Group, developer of the Providence master plan.

Since opening in 2006, Providence has consistently ranked among the best-selling master-planned communities in the United States by RCLCO, a leading independent real estate advisory firm, and is the second best-selling master plan in Nevada.

Providence is located at 7051 N. Hualapai Way at the Las Vegas Beltway north and Hualapai Way.

For information, call 433-5084 or visit providencelv.com.