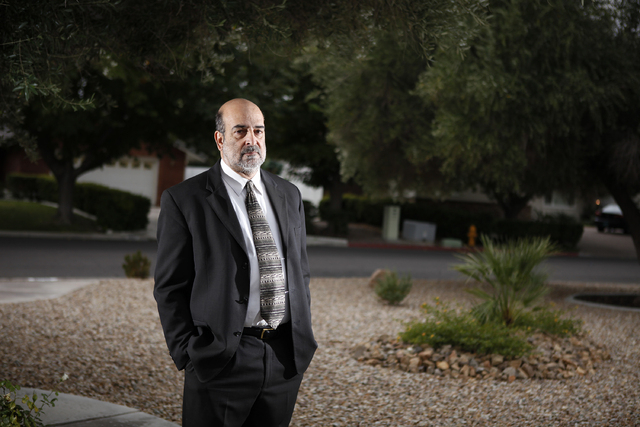 Longtime American Civil Liberties Union of Nevada lawyer Allen Lichtenstein has resigned from the organization after 17 years, leaving it temporarily without any attorneys on staff.

Lichtenstein says he resigned, effective Aug. 1, because of a changing climate at the ACLU, and new rules about speaking to the media. His departure is but one in a skein of high-profile staffers who have come and gone in recent years. But the organization’s relatively new executive director, Tod Story, says the mission of the ACLU will continue with other lawyers.

Lichtenstein, 63, was at the center of some of the ACLU’s most pitched battles, for free speech on the Strip and the Fremont Street Experience; for more accountability over officer-involved shootings by Metro Police and other law-enforcement organizations; in a lawsuit against the state over “dumping” of mentally ill patients on buses headed out of town; in the fight for better health care in state prisons and, most recently, for accountability over complaints about bullying that were allegedly ignored by some officials in the Clark County School District.

He even represented the media in some cases, including the now-defunct Las Vegas CityLife newspaper during the time when I was serving as its editor. Lichtenstein sued the state in a case that sought to overturn laws banning the advertising for legal brothels in counties where prostitution was illegal. The Ninth Circuit sided with the state, and the U.S. Supreme Court decided not to hear the case.

Lichtenstein said the organization had changed from the days when Gary Peck was executive director, when the unofficial motto was “no permanent allies or opponents, just principled issues.” Under Peck’s leadership, the organization defended conservatives such as the Eagle Forum’s Janine Hansen and then-Republican state Sen. Bob Beers, as well as liberals such as then-Assemblywoman Chris Giunchigliani. (Peck joined the ACLU of Nevada in 1996, and left without detailing his reasons in July 2009. He now works for the Nevada State Education Association.)

“Recently, I’ve gotten the feeling that the organization is more politicized and building permanent alliances with other groups and less about civil liberties,” Lichtenstein said. “That’s sort of not where I’m at or where I’ve ever been.”

In addition. Lichtenstein said, a new policy was put in place that asked him to get permission to speak to the media, something he’s done regularly throughout his tenure. “I’m just too old a dog to learn to do that particular trick,” he said.

But Story said that policy was simply a request that ACLU staffers report when they have received media calls, so that no one at the main office is blindsided by remarks made in the name of the organization. “It wasn’t to limit anyone’s access to the media,” he said. “It’s just a matter of keeping each other informed and respecting our roles.”

Story — a former top staffer for Rep. Shelley Berkley who was selected to head up the ACLU in May 2013 — also said the old philosophy of the ACLU has not changed. “There’s an old adage in the ACLU, at some point, we will end up disagreeing on something,” he said. “Our ultimate client is the Constitution.”

Story said Lichtenstein’s departure — and that of now-former Legal Director Staci Pratt, who is also no longer with the organization — won’t interfere with the ACLU’s mission to defend civil rights.

“I don’t think that’s going to impact us in a negative way,” he said. “The ACLU will continue to defend civil liberties and civil rights.”

Story said the ACLU of Nevada, which has been around since 1966, is undergoing a transformation from a group in which the volunteer board of directors has an outsize role in running, to one in which a professional staff handles day-to-day operations. “It’s a different model of running the organization,” he said.

“People should not be concerned in the least,” he said. “If you want to call it growing pains, that would be one way to describe it. … Nothing has changed as far as our mission is concerned.”

But the organization currently has no lawyers on staff, and must contract all legal work out to cooperating attorneys while it searches for a legal director and staff lawyer. (Those jobs have been posted.) In addition, Lichtenstein’s resignation can’t help but have some impact, given his expertise, high profile and long association with the organization.

For his part, Lichtenstein says he will continue his private legal practice, even focusing on some of the same civil rights issues he fought for while at the ACLU. (Some of the clients he’s worked with at the organization, in fact, have elected to have him continue to represent them.)

“The ACLU is an important vehicle to fight ordinances that violate civil liberties, but that fight is not dependent on a single organization,” he said. As someone who helped build the organization, he said his resignation has left him with a feeling of “wistful sadness.”

In addition, to Peck, Lichtenstein and Pratt, several other staffers have departed the ACLU in recent years, including:

• Dane Claussen, who served as executive director for two years before resigning “for personal reasons” in January 2013.

• Rebecca Gasca, who served as the ACLU’s lobbyist during the 2009 and 2011 legislative sessions before leaving to start her own private lobbying practice.

• Lee Rowland, who left to join the Brennan Center for Justice at New York University School of Law, who now works for the national office of the ACLU.

UPDATE: McLetchie said via e-mail that she, her law partner Robert Langford and attorney Lisa Rassmussen have stepped in to fill the gap left by the departure of the rest of the ACLU’s staff lawyers.

“Lisa Rasmussen, Robert Langford and I are serving as volunteer attorneys for the ACLU of Nevada through our respective law firms,” McLetchie said in an email. “Robert and Lisa are [ACLU] board members. I served as legal director and collectively, we have extensive experience litigating civil rights cases through trial and appeal. We were/are prepared to take over the representation in all current cases through trial/appeal as needed.”