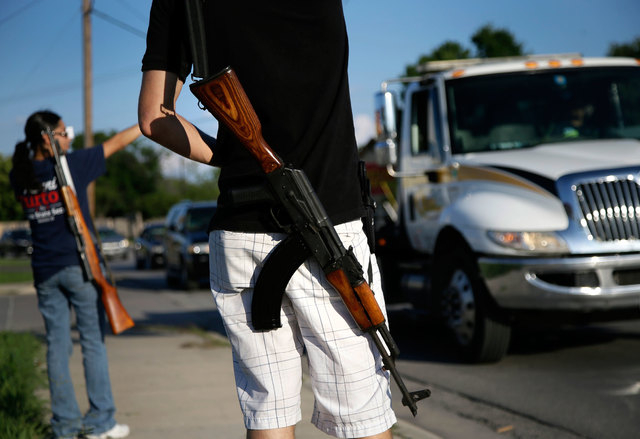 Kory Watkins, front, coordinator for Open Carry Tarrant County, carries his Romanian AK 47 over his shoulder as he and his wife Janie, rear, along with others, gather for a demonstration in Haltom City, Texas, on May 29, 2014. (AP Photo/Tony Gutierrez, file)

HOUSTON — The National Rifle Association has rolled back an earlier statement criticizing “open carry” rallies in Texas in which gun rights advocates have brought military-style assault rifles into public places.

Chris Cox, the executive director of the group’s lobbying arm, said in an interview Tuesday on an NRA-hosted radio show that the statement was “a mistake” and that it was written by a staffer who was expressing his personal opinion.

“The truth is, an alert went out that referred to this type of behavior as ‘weird’ or somehow not normal, and that was a mistake. It shouldn’t have happened,” said Cox, who added that the group “unequivocally” supports open carry laws.

The open carry rallies in restaurants and other businesses — part of a push for less restrictive gun laws, including legalizing the open carry of handguns — have prompted public criticism, and the NRA appeared to join in last week.

The statement appeared on the website of the group’s lobbying arm, the Institute for Legislative Action, saying that the demonstrations were counterproductive, scary and “downright weird.”

“Using guns merely to draw attention to yourself in public not only defies common sense, it shows a lack of consideration and manners. That’s not the Texas way. And that’s certainly not the NRA way,” the unsigned statement said. It remained on the NRA’s website early Wednesday.

Open Carry Texas, one of the groups behind the recent demonstrations, had said if the NRA didn’t retract the statement, Open Carry would withdraw its full support for the NRA.

Tov Henderson, an Open Carry member, told WFAA-TV in Dallas that the group’s clarification was refreshing.

“Getting the clarification from them that it wasn’t an official stance and that it was just a low-level employee … it makes sense,” Henderson said.

Texas has some of the least restrictive gun laws in the country, but openly carrying handguns remains illegal. Long guns like rifles can be carried openly but must be done so in a way that does not cause alarm. But gun holders can be charged with disorderly conduct if anyone around them feels threatened.

The open carry demonstrations, while peaceful, have upset some witnesses.

The Chipotle restaurant chain asked customers last month not to bring firearms into its stores after members of Open Carry Texas brought military-style assault rifles into one of its restaurants in the Dallas area.