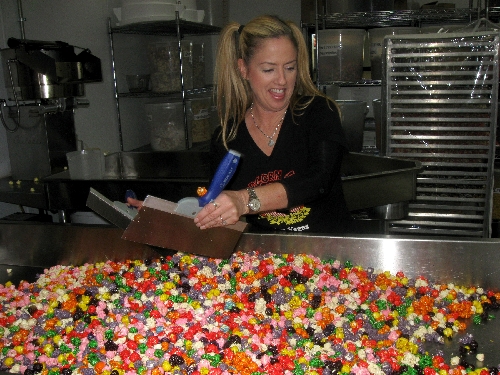 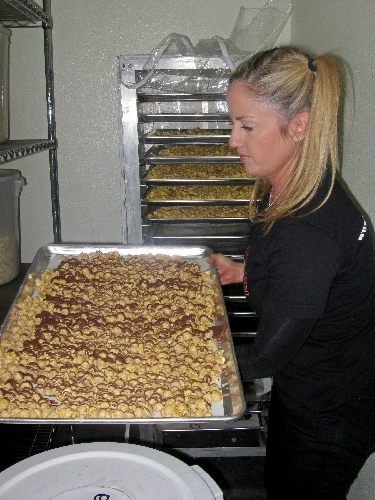 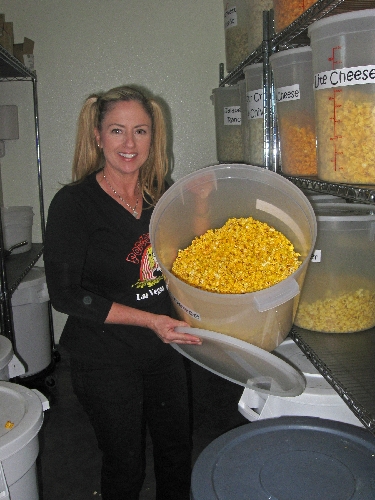 Less than three years ago, Popcorn Girl was just a small kernel tucked away in a Summerlin-area shopping center. But with a little time, the store’s success has expanded, popping up in a new location in Henderson and in a feature on the Food Network.

The original store, owned by Laurie Sabol and Mark Smith, has operated at 8550 W. Charleston Blvd. in the Summerlin area since 2009.

“We lucked out,” Sabol said.

Surrounded by other businesses, Sabol has gotten a lot of attention from curious passers-by to regulars who used to rely on the Summerlin-area location to fulfill their cravings.

Like a potato chip, popcorn flavors range from spicy, such as buffalo hot wing, to sweet, such as Oreo, and include savory items such as loaded baked potato — bacon bits included.

“A customer asked about having a buffalo hot wing,” Sabol said. “Now it’s one of our best sellers.”

A s’mores batch, made with graham crackers and chocolate on top, came from a wedding when the couple, who both enjoyed camping, wanted a Popcorn Girl popcorn bar.

People can mix and match, taking a raspberry flavor and pairing it with cheesecake, or maybe the southwest jalapeno and the pickle, transforming it into a spicy pickle.

Customers are encouraged to sample as many flavors as they like.

Justin Barnard has been coming in at least once a week since the store opened.

“I kept seeing the signs, and I was waiting for it to open,” Barnard said. “It is really good. I like the flavors like pizza or ranch.”

Barnard stands in front of the large sign describing the flavors, ponders for a minute and then decides on something new.

“I’ll try the Butterfinger,” Barnard said to the girl behind the counter during his latest visit.

John Whitehead is a new customer who stopped by after seeing a sign as he drove down Green Valley Parkway.

Whitehead said he used to go to a similar popcorn store in Chicago called Garrett Popcorn.

Instead of paying more than $40 to ship in his favorite, caramel and cheese popcorn, he hoped he had found a new place in Popcorn Girl.

“It’s so close to my house,” Whitehead said.

For Sabol, it is all about customer service.

“I’m like a bartender but with popcorn,” Sabol said. “It’s like when you go to Starbucks and the person knows who you are and what you want. We want to do that.”

With a popcorn necklace dangling from her neck, Sabol leads by example, taking time to greet, chat, laugh and taste with customers.

Customers swing into the store, and over time, Sabol and the employees hope to get to know each face and taste.

“(The employees) have about five seconds from when the customer walks through the door to greet them,” Sabol said. “We could be packed, but they always find a way to greet them. I think it’s frustrating when you go somewhere and they don’t greet you.”

If it’s not popcorn they are searching for, customers can also try fudge , taffy and assorted candies.

People can take it in a bag, box or tin to go or place custom orders for weddings, birthdays or special events.

When the store was featured on the Food Network show “Kid in a Candy Store” in February 2011, sales began to skyrocket, Sabol said.

“It was a miracle to end up on the Food Network,” Sabol said. “I thought it was a joke at first when they called.”

The crew filmed in December 2010. After it aired, the store received more than 2,000 online orders . It took almost six weeks to fill all the orders.

“But we have learned and have gotten more efficient,” Sabol said.

Now Popcorn Girl isn’t just a store but a destination for tourists.

“People are taking $30 cab rides from the Strip to see the store,” Sabol said. “They wanna see Popcorn Girl and see the store.”

If curious enough, people can ask about the store’s name, which partly came from Sabol’s chronic catch phrase, “Hey, Girl.”

“I’m always saying, ‘Hey, Girl,’ ” she said. “Now I have customers who come in and say, ‘I need some more popcorn, girl.’ The name is just really catchy.”

Sabol said the future of Popcorn Girl looks bright. She is thinking about opening locations in Arizona or Utah.

“I would love to open a satellite store downtown,” Sabol said. “I keep sending stuff over to Zappos to get the employees addicted. Then maybe I can call them up to see if they are interested in having me.”