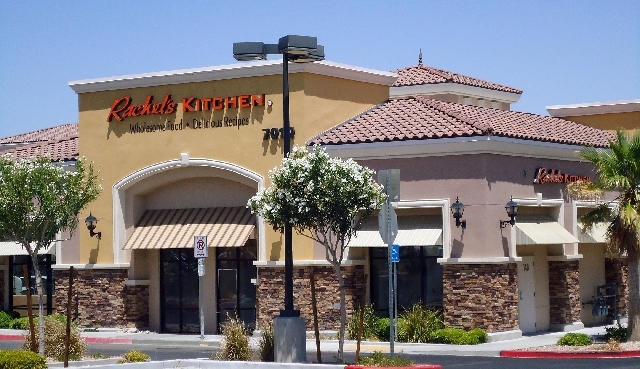 The newest Rachel's Kitchen, 7010 N. Durango Drive, which hosted a grand opening June 11, is the fifth opened by restaurant founder Debbie Roxarzade in the Las Vegas Valley since 2006. Once the company finishes work on a McCarran International Airport location this summer, an expansion into Arizona, California and other states in the region is planned.

Roxarzade said she plans to start work on a McCarran International Airport location this summer but hopes it will be the last time the restaurant chain revisits the valley before dipping its toes in Arizona, California and elsewhere in the region.

“I think we fill a niche for people,” Roxarzade said. “We’re a combination of healthy food, fresh food, a lot of fresh juices, the kinds of things pretty much everyone can come in and eat and not feel bad about it.”

Roxarzade, who opened Rachel’s flagship location on Town Center Drive in 2006, thinks the restaurant named for her 9-year-old daughter and built around award-winning smoothies has a good shot to go viral.

She should know. Two years after outgrowing her first location, the former California restaurateur — once the owner of six cafes in Los Angeles and Beverly Hills — is confident the franchise can find its legs outside the Las Vegas Valley.

“I think a lot of people would compare us to Panera (Bread) just because it’s fast-casual, lots of salads and smoothies and things,” the 41-year-old said. “I think there’s a lot of potential growth in that area because I think people are becoming much more aware of what they’re eating. Lots of people have special diets and special allergies, and we’ve always been aware of that.”

On board to help stretch the restaurant’s reach beyond Las Vegas is Kent Asaki, owner of one other Rachel’s in addition to the new Centennial Hills location.

Asaki’s 21 years in corporate management consulting told him that Rachel’s could be in a good position to start spreading its wings.

But it was prevailing market winds that convinced him the restaurant was ready to take flight.

“I ate at the original Rachel’s location for years, and I understood what the original location had to offer and knew it would be a good investment,” said Asaki, 44. “This whole fast-casual concept is the fastest-growing segment of the market. Even Taco Bell is looking to go in that direction, so we want to get as many franchises in that vein as we can.”

At $9 to $12 a plate, Asaki is not worried about sticker shock at any future locations. Neither, he said, are the dozens of former regulars looking to become franchisees.

“What we’ve been finding is the interest is coming from individuals who lived in Vegas, loved Rachel’s, moved away and thought, ‘Oh my god, Rachel’s would be perfect here,’ and now they’re calling us up,” Asaki said. “I think it’s the food, the price point and also the service model.

“That’s the other reason I liked it. There’s nothing gimmicky about it. There’s no catch. The model is wholesome food, delicious recipes and that’s it. And that’s what people love.”