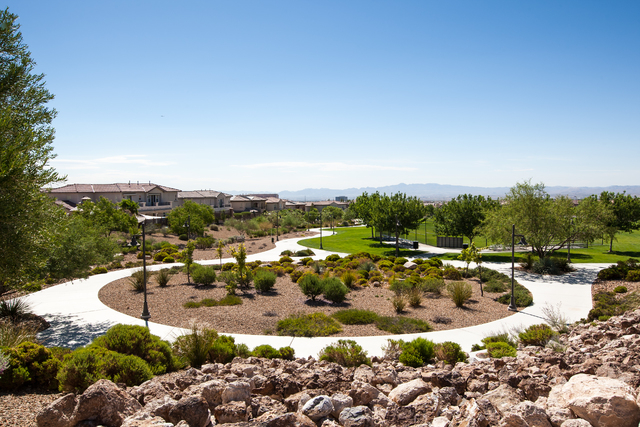 Courtesy photo First recognized in 2002 by Money magazine for its “new urbanist” design, Summerlin, with nearly 6,000 acres still yet to be developed, is once again named among the Best Places to Live in America.

In 2002, Money magazine ranked Las Vegas as one of America’s top 10 cities to live, citing Summerlin as the valley’s “chief community.” Today, 12 years later, Summerlin has once again received a shout-out from Money in its annual Best Places to Live in America issue. Las Vegas is included on its 2014 list of big cities offering value, and Summerlin is both cited and pictured for its 150 miles of trails and vast array of lifestyle amenities including tennis courts, golf courses, playgrounds and adjacency to outdoor activities at nearby Red Rock Canyon.

The publication also quoted UNLV economics professor Stephen Brown on a Summerlin bonus: “It’s about five degrees cooler on the west side,” he said.

In 2002, Money wrote that Summerlin’s “drawing card was its careful New Urbanist layering of residential, commercial and civic features. The result: a pleasant neighborhood that keeps property values up.”

According to Danielle Bisterfeldt, director of marketing for Summerlin, that statement rings even truer today with the continued evolution and success of the community. “Downtown Summerlin, the community’s new 400-acre urban center, stands as the ultimate model of New Urbanism, bringing significant fashion/dining/entertainment amenities and live/work opportunities to the community in a walkable, thoughtful and integrated way,” she said. “And thanks to the value of master planning, Summerlin has continued to maintain its appeal and value – even through the Great Recession.”

This is the latest recognition for this award-winning community that has received national attention from media, professional organizations and industry nonprofits for more than a decade.

In 2002, Summerlin was named Community of the Year by Urban Land Institute, which cited it as a model of real estate success on a global scale. In 2007, National Geographic Adventure named Summerlin the No. 1 best place to live and play for its proximity to Red Rock Canyon and its focus on active, healthy, outdoor living. And in 2008, Summerlin received the inaugural American Trails Developer award from American Trails, a national nonprofit dedicated to trail interests. The award was especially significant in that it represented the first time the award had been given to a private developer.

And finally, Summerlin was featured as a model U.S. community at the National Building Museum in 2012. The multi-media exhibit lauded the community for its standard setting design that helped to redefine Las Vegas as a great place to live.