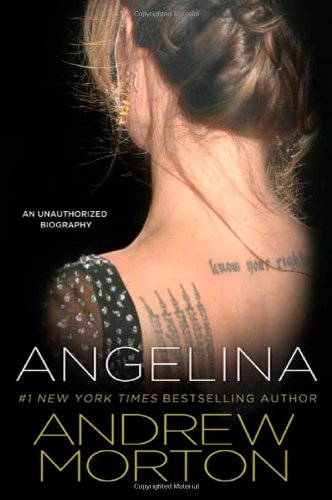 Unlike Angelina Jolie’s mother is reported to have been — in Andrew Morton’s unauthorized biography, “Angelina” — I’m not a tabloid junkie. In fact, there are few celebrities whose glossy faces might inspire me to grab a magazine from the rack, but Angelina Jolie’s is one of them. (And now, so is Charlie Sheen’s!) You see, I’m a sucker, not so much for tabloid gossip, but for a good story. Give me a complex character. Give me drama, suspense, mystery. Give me family turmoil, adultery, arch enemies. Jolie’s story promises it all.

But tabloids seldom deliver on the promises of headlines. So, having spent decades watching Jolie’s fascinating life unfold in snippets, at the checkout, and having read a dozen articles that informed me only marginally more than these, I was primed for Morton’s “Angelina.”

Of course, the folks at St. Martin’s Press knew this. Hence, the genius jacket cover: a photo that captures all the mystery that is Angelina (glamorous updo and righteous tattoos, included) and promises a peek at her gorgeous visage — and into her private world — if only you buy the book, open the cover.

Well, I did. Then I devoured it in three days! All the while disgusted at my guilty pleasure for what is essentially gossip — really good Hollywood gossip — but gossip never the less. Morton’s sources are too limited to make it much more. Then he relies too heavily on a single source, Jolie’s baby sitter of 33 years earlier, to make a psychological case of Jolie and fake a depth to his book.

Still, Morton (who’s also written biographies about Tom Cruise, Monica Lewinsky and Princess Diana) does a nice job of piecing together a cohesive life story. “Angelina” begins with the birth of Jolie’s mother, Marcia Lynne (later Marcheline) Bertrand; follows her from Riverdale, Ill., to Hollywood; sees her marry actor Jon Voight; and chronicles their own scandalous tabloid fodder of the 1970s, when Jolie and her brother, James, were born. (Yes, the same brother Jolie would later full-mouth kiss in front of cameras to further feed the … well, you see the trend here.)

Much of the first third of the book concerns Voight — his career, his affairs, his family troubles — and works to enlighten the reader to the highly dysfunctional backdrop of Jolie’s childhood. But it’s also interesting stuff, and readers will sit happily through it, partly for the pleasure of the nostalgic material, but mostly because it comes early in the book.

The same content would fail miserably following Jolie’s disturbing, yet oh so titillating, escapades, which come thereafter and include, but are not limited to, a fascination with death and cutting; S&M and bisexuality; drugs and tattoos; early marriages; failed marriages; ruining marriages; and blood vials for jewelry.

Where Morton’s book falls shortest is in its attempt to understand the enigma that is Angelina Jolie. For all her contrary behavior, Jolie is a talented actress; an Academy award winner; the woman to bump Oprah from her top spot on the Forbes’ 2009 Celebrity 100 list; and the mother of six children she parents with Brad Pitt — three of whom she’s rescued from lives of poverty, through adoption.

Morton considers astrology and the diagnoses of various psychologists (whom have never treated Jolie) when he attempts to explain her. But it is the baby sitter’s account of an infant once abandoned that Morton grabs and clutches, unrelentingly, throughout. Unfortunately, his pop psychology stands in direct and obvious conflict with the complex, multigenerational story of Hollywood dysfunction, even as Morton tells it. And I just don’t buy it.

But I did buy the book, and it did amply satisfy a craving that so many trips to the grocery store had inspired. So now, I’m good for a while, at least for a few decades anyway — when, surely, the Brangelina children will have stories of their own hit shelves — and climb charts.