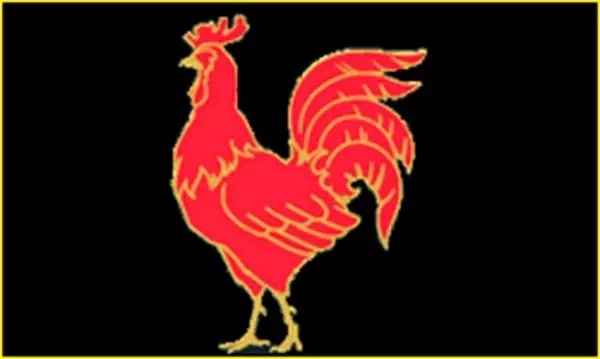 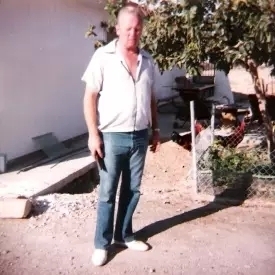 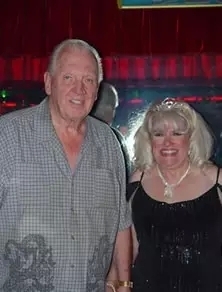 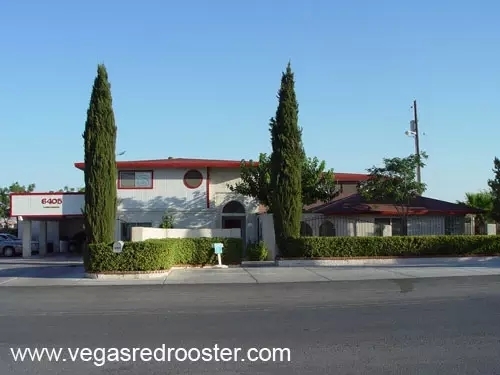 Las Vegas has lost one of its great champions of free love. Mike Borchers died at 81 on Monday. He and his wife, Chris, have been running one of America’s biggest swinger parties for 32 years here.

The Red Rooster is so popular in the “lifestyle” community, people fly to Las Vegas from all over North America specifically to check it out. Tons of locals go there, too, as well as conventioneers and tourists in town for everything from the Electric Daisy Carnival to the rodeo and the Consumer Electronics Show.

“My wonderful husband, Mike Borchers, passed,” Chris Borchers wrote on Facebook. “He didn’t suffer. He lived a Long and Happy Life and had many friends.”

She and others are keeping open their legendary Red Rooster, 6405 Greyhound Lane, where the Borchers have been the undisputed king and queen of swinging in Las Vegas.

The party goes on.

The Red Rooster rarely gets press. Three reasons: The Borchers would never seek it; the media doesn’t do many features on people in open relationships; and swingers, voyeurs and exhibitionists often keep a certain kind of privacy outside their circles.

You don’t have to engage in sex at the Rooster. I have taken friends there just for casual drinking (it’s BYOB). People at the Rooster are friendly but respectful and not upset when you say, “No thanks.” But people say “Yes” too, of course. The general vibe the Borchers created there is consensual, fun-loving and safe, with volunteers acting as security.

I talked to Mike Borchers quite a few times, but he let me interview him officially only once, in 2003.

Read that story below. The funeral is scheduled for noon Tuesday, with a viewing at 10 a.m., at Davis Funeral Home, 6200 S. Eastern Ave.

He makes this observation in his bright office, while eating ice cream out of a rectangular carton with a spoon, as strangers walk in and hand him $20 bills.

After people give him $30 to $50 entrance “donations,” Mike grants couples and single men admission into the Red Rooster, one of the country’s most prominent swingers clubs and a Las Vegas institution. It’s also where Mike and his wife, Chris, live.

“Your sexual organs need to be satisfied, like everything else. If you don’t get (sex) occasionally, or have an orgasm, you’re gonna have a nervous breakdown,” Mike says. “Just because you have a strange (sexual encounter) every now and then, doesn’t mean you don’t love your wife.”

Friday night at the Rooster. Lights glow red. Most of the 200 or so swingers are dressed, although a woman on the dance floor has let loose her prodigious breasts. Couples sit at tables, or go back to check out the pool, or they shoot pool. A few guys walk around, wearing only towels.

Swingers appear to be in their late 20s to 50s. They’re white, black, Asian and Hispanic. They are trim, slightly overweight or obese. The demographic resembles that of a company Christmas party.

“You don’t want to swing with the same couple three times,” says Chris, who declines to give her age. “It’s boring: ‘Oh, are you going to do that again? I didn’t like that the first time.’ ”

Mike and Chris’ house evolved into the Red Rooster. Mike had already run a fish and chips place, dealt craps and raised greyhounds. When the greyhound circuit ground out, he turned his dog quarters into this house.

But the law couldn’t stop Mike and Chris from hosting parties in their own home. The issue of the Rooster’s legality came down to whether it needed a permit, as say a juice bar, oddly enough. Mike and Chris argued successfully, time and again, that “parties” don’t need permits.

Police intervention has mainly served to promote the Red Rooster, anyway. News of the first raids in 1983 turned Mike and Chris’ home into a star, with a party thrown six nights a week.

Lt. Terry Davis of the vice section at the Metropolitan Police Department says other swingers clubs have been busted, both years ago and recently, but for problems the Rooster has avoided: Prostitutes propositioned people in other clubs. Once someone has paid admission, further talk of money arouses suspicion.

“If they are charging you for a sex act, that’s against the law,” Davis notes.

He suggests swingers should at least use condoms. The Rooster has condoms available.

Over the years, judges and TV personalities have frequented the Rooster. Plenty of cops. Doctors, lawyers, teachers. Cocktail waitresses. Bartenders. Others in Las Vegas’ service industry. And many real estate agents, Mike says.

Swingers say the Red Rooster has a lot going for it. It’s hard to find in an industrial area near Tropicana Avenue and Boulder Highway, so random drunks and prostitutes don’t drop by on impulse. If pushy weirdos and jerky husbands show up, security volunteers quickly eject them. Signs posted in the club read: “No means no!” and “No drugs.” The Red Rooster doesn’t employ workers. Bartenders, waitresses and others are volunteers with socializing benefits.

Virginia and David Cooper — Red Rooster-goers who have started their own “Plush Parties” for pretty people — got into the lifestyle eight months into their 13-year marriage. At first, Virginia said no to other women. So Mike said they could add other men, first.

“That opened my mind,” Virginia says. After a while, Virginia had a great experience with a woman. “She was really soft, and she made me feel really, really comfortable,” Virginia recalls. “After that, I was, like, ‘I’m not weird. This is cool.’ ”

Another swinger says, before she and her boyfriend started the lifestyle, she couldn’t imagine it would work out. But the first time she watched him have sex with another woman, that turned her around.

Clearly, not everyone is wired for the lifestyle. At Vegasredrooster.com is the warning: “If either of you is already having an affair … or is unreasonably jealous … or distrusts your mate … or keeps the other up all night long accusing him or her of wrongdoings, then this lifestyle will only make your problems(s) EVEN WORSE!”

Mike says the worst things in the lifestyle are jealous husbands. And people who blindly frown on the lifestyle: “You can go to the courthouse every day and see 200 or 300 people getting divorced. None of those people are swingers.”

Mike stands tall and broad, and retains the silvery-blond hair of his youth. He must have looked commanding when he was a slim, good-looking kid on the farm in Illinois, even more so when he was a Marine, or after that, when he delivered mail in Florida in the early 1960s. In six years on his 400-house postal route, Mike says, he had sex with 250 women.

Mike talks deadpan, until something tickles him, and then he has a hearty laugh that he can’t stop until it runs its course. His wife wears big, silvery-blond hair and a frequent, joyous expression that resembles Dolly Parton’s celebrity glow.

In 1968, friends introduced Mike to Chris. They were both divorced. Each was already a parent to five kids. Chris was a few years into Las Vegas, out of Kansas, and she had modeled for Sears.

Mike told Chris, “This is the way I want to live, and if you want to be with me, you’ve got to be in it,” as she remembers.

After Chris’ first lifestyle party, Mike and Chris were driving away, and he asked her what she thought.

“I can’t believe I just (had sex with) four guys, and nobody’s mad at me,” she told him, as he remembers.

They were married the next year.

“It’s heaven,” Mike says of his union. “When you get into the lifestyle, you alleviate the sexual problem. It builds a trust and a bond. … If you added up all the time we’ve argued in 34 years, you wouldn’t get an hour and a half. And when we argue about something, it’s about the color of the rugs.”

“From the start, it’s been so perfect,” Chris says of her marriage.

“You have a lot more than sex going for you. You have your life. You have your jobs. You have your children. You compartmentalize your life,” she says. “After you get into swinging, you find out jealousy is just insecurity on your part. … You can’t control other people. You can barely control yourself.”