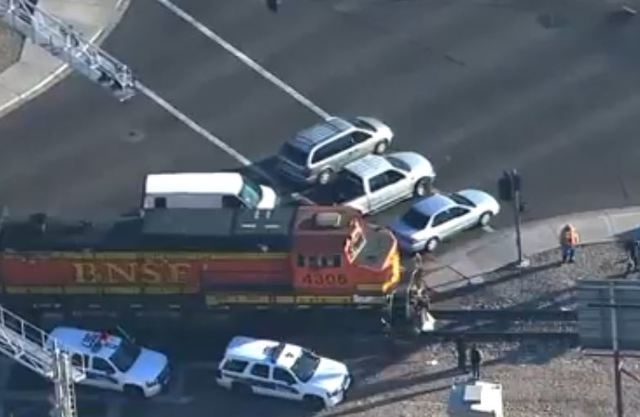 A woman was hospitalized in serious condition but expected to survive after she was run over by a pair of locomotives in Phoenix on Thursday morning. (Screengrab, azcentral.com)

PHOENIX — A woman was hospitalized in serious condition but expected to survive after she was run over by a pair of locomotives in Phoenix on Thursday morning.

The incident closed 27th Avenue in both directions at the rail crossing with Thomas Road near Grand Avenue about 8 a.m., a Phoenix Fire Department spokesman said.

The woman was carrying taquitos and wearing headphones as she sauntered along the tracks, a Phoenix police spokesman said, and apparently couldn’t hear the train’s blaring horns.

It took the locomotives about a quarter-mile to come to a complete stop, the spokesman said.

The woman was struck by the pilot, a device on the front of the locomotive used to deflect objects that could derail a train, and was lucky in that she slid under the engines into an area below the tracks that allowed the the engines to pass over her, the spokesman said.

The locomotives belong to the BNSF Railway.