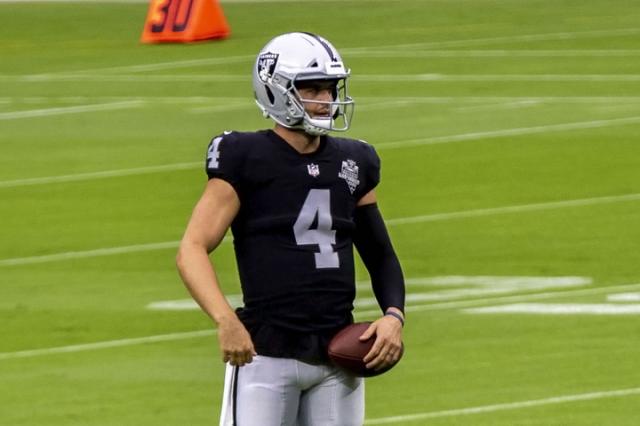 Vegas Nation’s Heidi Fang and Sam Gordon update on the latest Raiders news from their training camp in Henderson and hear from general manager Mike Mayock who gives his impressions of Derek Carr during the offseason. (Heidi Fang/Las Vegas Review-Journal) Vegas Nation’s Heidi Fang and Sam Gordon update on the latest Raiders news from their training camp in Henderson and hear from general manager Mike Mayock who gives his impressions of Derek Carr during the offseason. (Heidi Fang/Las Vegas Review-Journal)

A look back at the Raiders 2019 Draft Class and an assessment of their production last season. (Heidi Fang/Las Vegas Review-Journal) Raiders head coach Jon Gruden announced that Josh Jacobs would be doubtful for Sunday’s game against the Broncos after the team held their final regular season practice in Oakland. Jacobs and Mullen among Raiders missing from Thursday’s practice – VIDEO

Rookies Josh Jacobs and Trayvon Mullen were two of the six Raiders missing from Thursday’s practice. The others were guards Richie Incognito and Gabe Jackson, defensive back Lamarcus Joyner and wide receiver Tyrell Williams . Raiders running back Josh Jacobs underwent surgery for a “superficial skin infection.” Jacobs was among 6 players who missed practice Thursday due to injury. The Raiders beat the Chargers 24-17 on Sunday afternoon to snap a four-game losing streak and keep their playoff hopes alive. Raiders head coach Jon Gruden knew once he took over the team that there needed to be changes made regarding player contracts and the teams salary cap. The Raiders have since then brought in a ton of young talented players to play alongside veterans that will put all of them in a position to shine. After emerging victorious on Sunday against the Cincinnati Bengals, many of the Raiders, including one of the newest additions DJ Swearinger, spoke to the environment that the organization provides and how it becomes evident on the field. (Le’Andre Fox/Las Vegas Review-Journal) Raiders-Texans is a Reunion for Clemson Stars – VIDEO

When the Raiders take on the Texans this Sunday in Houston there will be seven former Clemson Tigers taking the field, including the Texans’ dynamic quarterback, Deshaun Watson. (Le’Andre Fox/Las Vegas Review-Journal) The Raiders traded cornerback Gareon Conley to the Houston Texans on Monday. Rookie Trayvon Mullen will takeover making his first NFL start on Sunday against Conley and the Texans. (Le’Andre Fox/Las Vegas Review-Journal) The Oakland Raiders made a pair of trades to gain some value in the remaining rounds of the NFL Draft. The Review-Journal’s Michael Gehlken and Heidi Fang break down those moves, what positions the Raiders could look to fill in the coming rounds and more at the conclusion of day 2 of the 2019 NFL Draft.

The Raiders made two trades which gave them picks in later rounds and moved down in the second-round to grab the 40th pick overall on Day 2 of the 2019 NFL Draft. General Manager Mike Mayock explains the moves and talks about their new cornerback from Clemson, Trayvon Mullen. (Heidi Fang / Las Vegas Review-Journal)