Allegiant Air has expanded into some unusual side businesses for an airline
An Allegiant Air plane sits on the tarmac at McCarran International Airport in Las Vegas with the Raiders football stadium under construction in the distance on Tuesday, May 7, 2019. 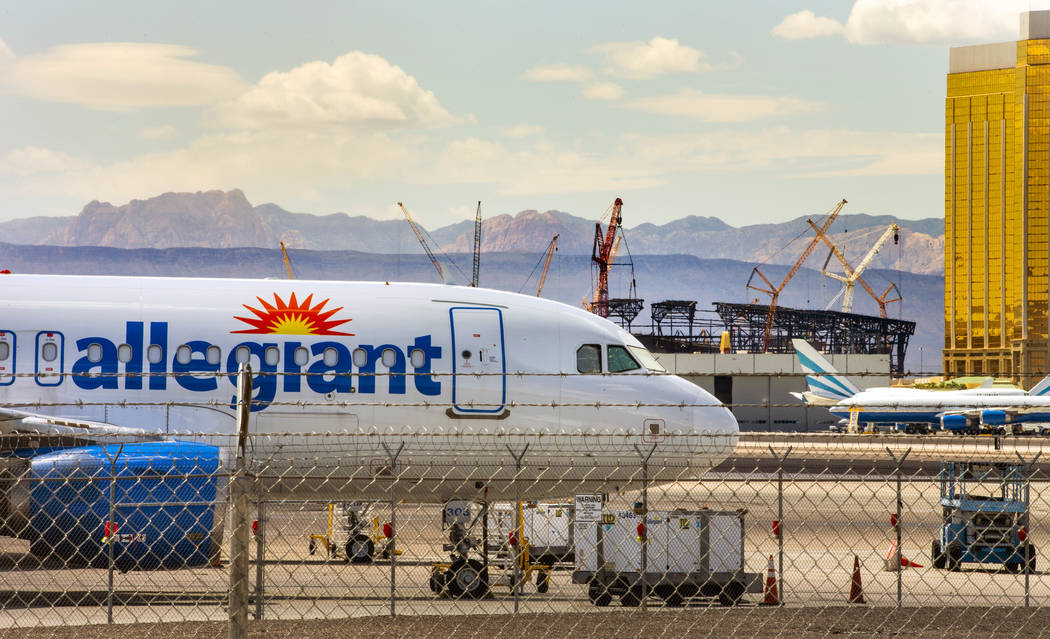 An Allegiant Air plane sits on the tarmac at McCarran International Airport in Las Vegas with the Raiders football stadium under construction in the distance on Tuesday, May 7, 2019. L.E. Baskow/Las Vegas Review-Journal @Left_Eye_Images 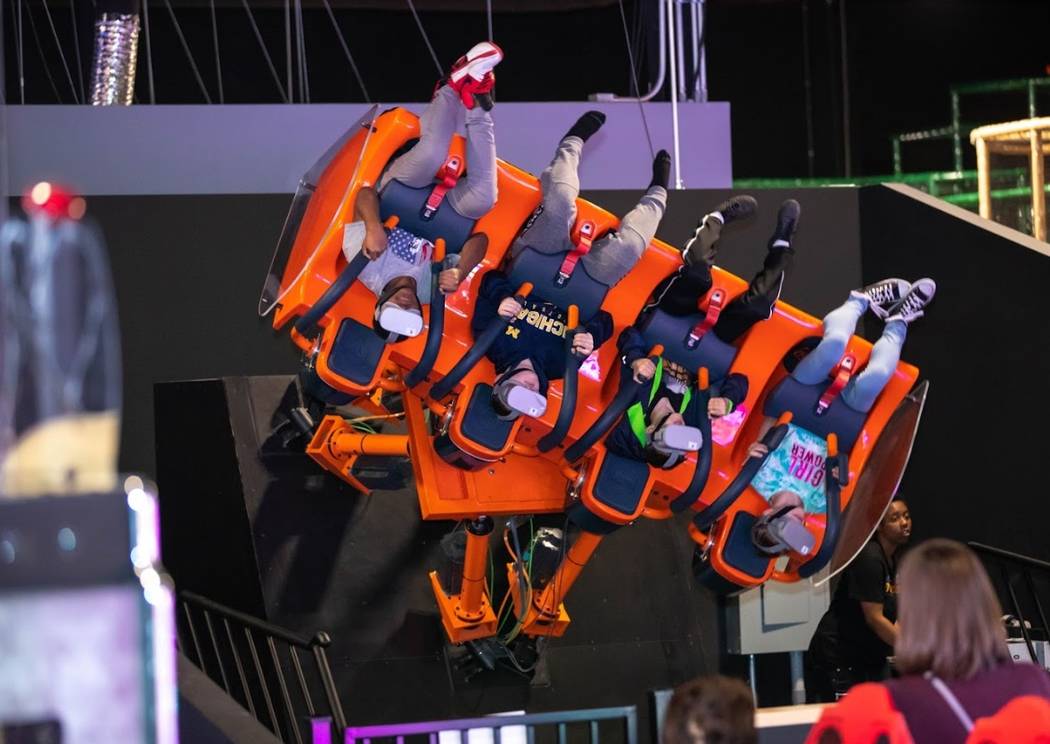 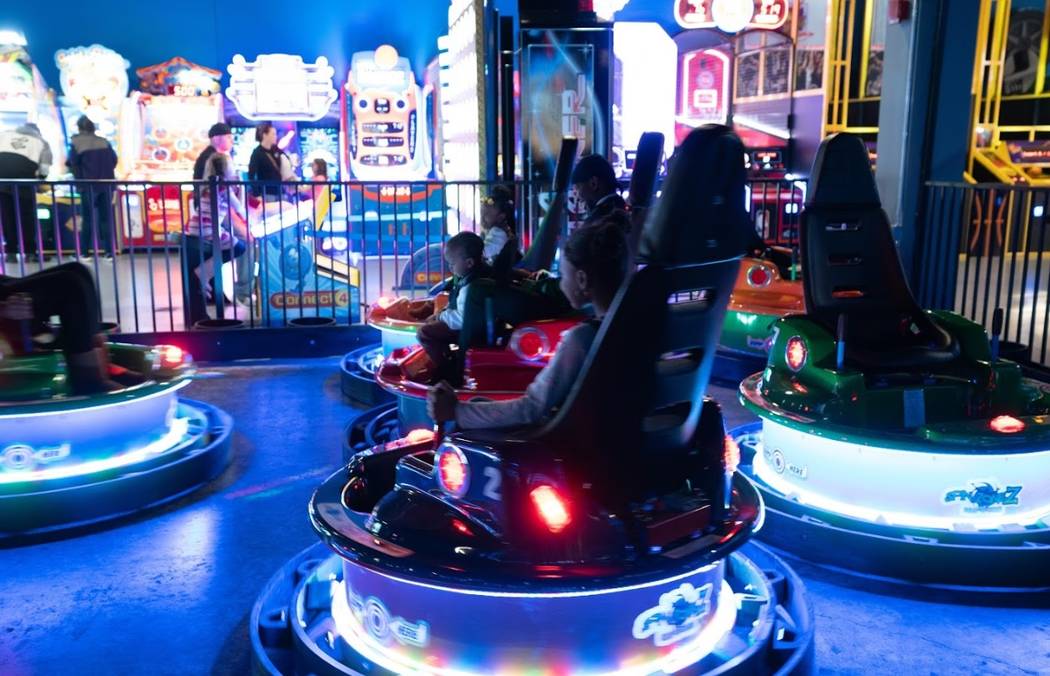 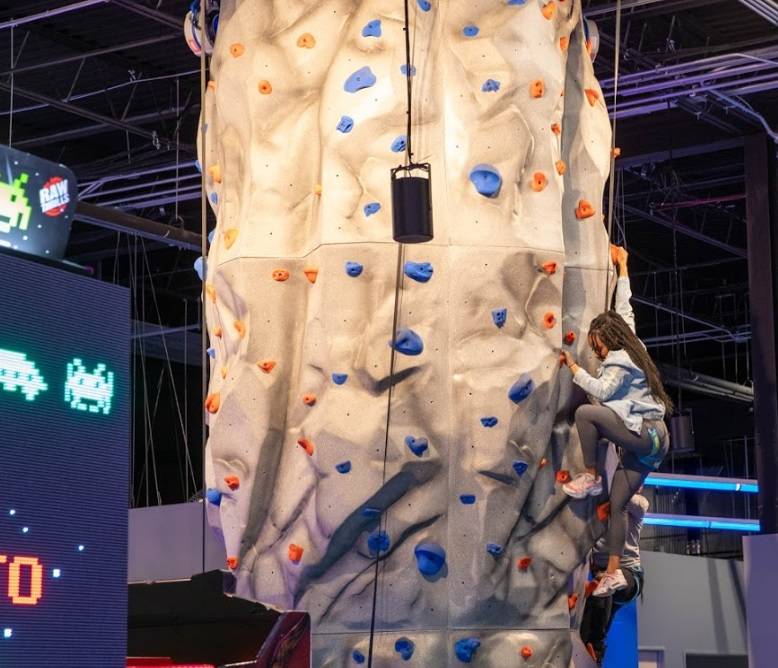 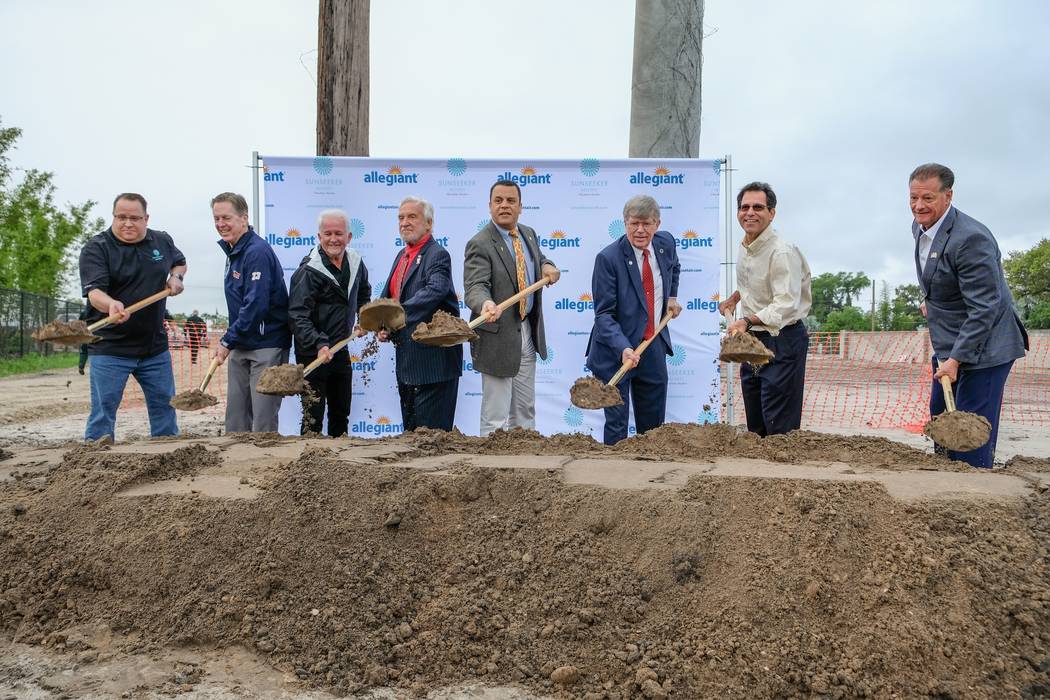 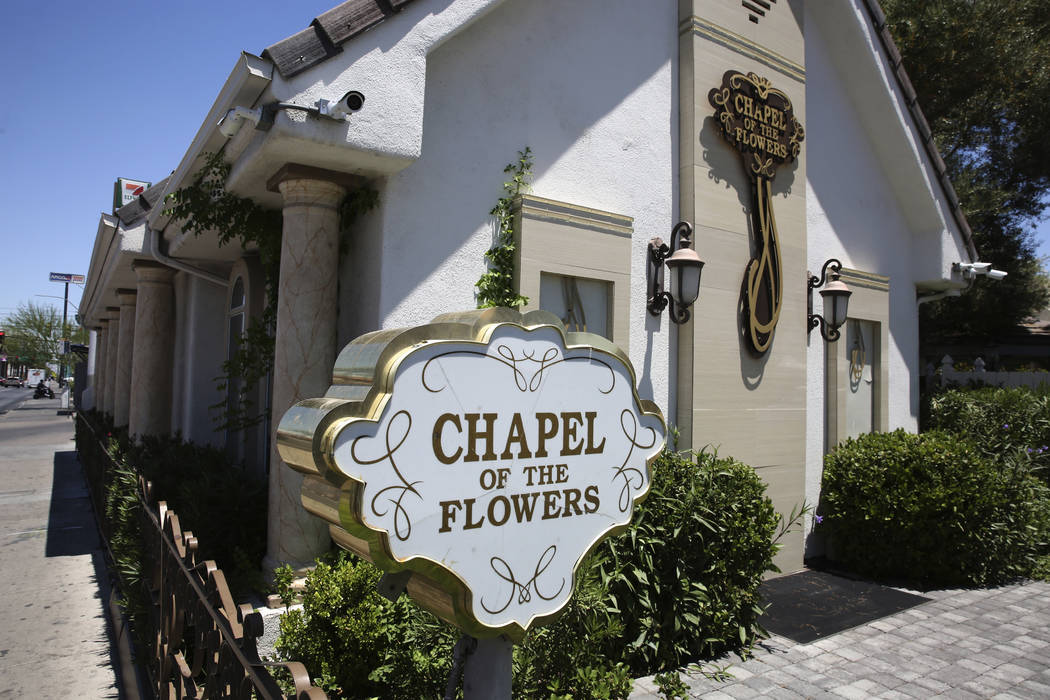 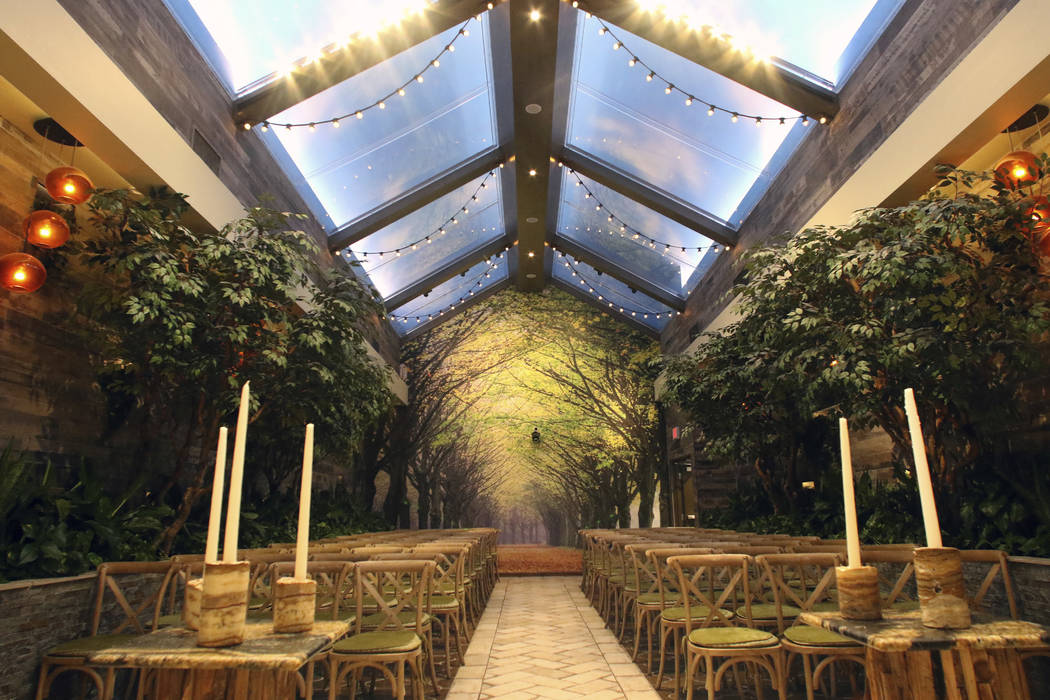 The Glass Gardens at Chapel of the Flowers, a wedding chapel on Las Vegas Boulevard, is photographed on Friday, June 21, 2019. (Bizuayehu Tesfaye/Las Vegas Review-Journal) @bizutesfaye 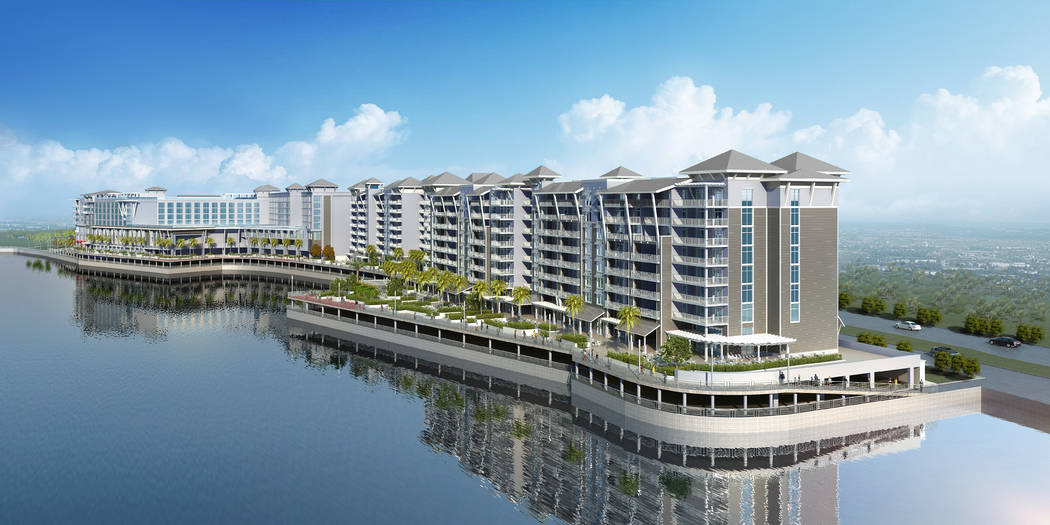 His deep-discount carrier flies from small, underserved cities to warm-weather vacation spots, usually without competition on its routes. It charges $5 to print a boarding pass at airports, parks planes on light travel days, and doesn’t offer coffee on-board.

Allegiant is also the only U.S. airline with side businesses that aren’t directly related to air travel, analysts told the Review-Journal – and its push outside aviation has left plenty of observers scratching their heads.

Las Vegas-based Allegiant Travel Co., the carrier’s parent, is developing a 22-acre resort in Port Charlotte, Florida, a town that, as one local put it, is “nothing really special.” The company has also opened two arcades – one in Utah and another in Michigan – featuring laser tag and bumper cars, and plans more locations; owns a golf-course-management software business; and has talked about managing other hotels in Florida.

In some ways, the expansion isn’t a surprise, given who’s in charge.

Gallagher, chairman and CEO of Allegiant Travel, has a history of personal side ventures. His interests have included a roadside Las Vegas wedding chapel and businesses that inked millions of dollars in deals with his airline, including a race-car team and a television game show filmed on Allegiant flights.

The next two years, Gallagher said this spring, will be “investment years” for the company’s non-airline projects.

“Why are you spending any capital and company focus on golf course software and Dave & Buster’s-like game rooms?” Evercore airline analyst Duane Pfennigwerth asked Allegiant executives during a January earnings call, adding the ventures “might be interesting experiments” but questioned why shareholders are paying for them.

“Well, we look at the synergistic value,” Allegiant President John Redmond replied, though before he finished his thoughts, Pfennigwerth interrupted.

“John, John, I’m sorry. … I’ve covered Allegiant for a long time. There is no synergy between golf-course-management software” and the airline, he said.

Why are you spending any capital and company focus on golf course software and Dave & Buster’s-like game rooms?

The airline is a consistent money maker: Allegiant Travel in 2018 booked its 16th straight year of profitability, earning almost $162 million in net income. But investors are concerned “all these other side businesses will take management focus away from the most important part” of the company, Raymond James & Associates airline analyst Savi Syth told the Review-Journal.

Well, we look at the synergistic value.

He said he does “kind of chuckle” when he sees the software firm, Teesnap, and noted the arcade business, Allegiant Nonstop, is “way out there in terms of being something very different.”

But if the ventures are managed properly, he said, “I see nothing but stuff to like here.”

Micah Richins, chief operating officer of Allegiant’s Sunseeker Resorts division, told the Review-Journal that Gallagher is not afraid to take a risk or move ahead with a plan “whether people think it’s popular or not.”

He also noted Gallagher is Allegiant’s largest shareholder, saying this speaks volumes about the boss’ thoughts on the company’s direction.

“He’s putting his money on the line,” Richins said.

More than a few people have questioned Allegiant’s moves, as Stifel Nicolaus analyst Joe DeNardi pointed out during an investor day in September.

“I’m sure you guys are aware that a lot of people don’t like this idea, a lot of your investors and analysts,” he told Allegiant executives during a discussion about the Florida project, Sunseeker Resorts Charlotte Harbor.

During the January call, Pfennigwerth asked about the board-level debate when Allegiant looks to spend money, briefly raising his voice as Gallagher tried to interject multiple times.

“Duane, let me tell you what the debate looks like,” Gallagher said. “The person that sits on an airplane, what else do they do besides sit on an airplane? Do they go to a Dave & Buster’s? Yeah. Do they play golf? Absolutely. So you gather information – this is an information-centric era, Duane. … We want more customers, we want bigger wallet share.”

Cowen and Co. airline analyst Helane Becker said big developers ignored the Sunseeker site, and she wondered what Redmond, a former casino executive, saw in it. But the project makes more sense to her than Allegiant’s other ventures.

“I’m not 100 percent certain how the other businesses fit into the plan,” Becker said.

‘Dumping a ton of money’

Allegiant broke ground in March on Sunseeker, which is being built along the Peace River in southwest Florida.

The first phase – featuring some 500 hotel rooms, 180-plus extended-stay units, conference space, restaurants and retail – is expected to cost $470 million, including $50 million that was already spent for the land, Allegiant spokeswoman Hilarie Grey previously told the Review-Journal.

Richins, of Sunseeker, said phase one covers about 7 acres.

Allegiant last year also bought Kingsway Country Club in Lake Suzy, saying the golf course will be “operated in conjunction with the resort.”

Florida hotel operator John Zaccari, who runs a hotel in Port Charlotte and one in nearby Punta Gorda, said it seemed like Allegiant pushed ahead with Sunseeker “before they realized what they were getting themselves into.”

Allegiant announced plans for the resort in summer 2017, saying it would include up to nine condo towers. But last year, Redmond told analysts Allegiant “never moved into a sales mode on the condos,” despite getting “plenty of interest” in them, and switched gears because the company can make more money with a hotel property.

Allegiant offers vacation packages, and Richins indicated it can lose access to hotel rooms when the economy is strong but has “full control” of Sunseeker.

He didn’t rule out selling condos at some point but said that as the project evolved, the company “understood the market better” and backed off the plan.

He also noted Allegiant is building a team of hospitality professionals for the resort, not airline veterans.

Allegiant has a captive audience of sorts. It is the only commercial carrier that serves Punta Gorda Airport and averaged 24 arrivals and 24 departures a day last year, according to airport spokeswoman Kaley Miller.

Punta Gorda is also one of Allegiant’s top airports for passenger growth, Grey said. Allegiant’s tally of departing flights from Punta Gorda has grown an average of 296.5 percent annually over the past 10 years, according to data she provided.

Jared Bohager, manager of the Charlotte Harbor RV Park right near Sunseeker, said there are concerns the resort will spark more traffic, but otherwise locals think the project is great.

“We love that it’s going up,” he said, adding Allegiant is “dumping a ton of money into the area.”

According to Bohager, Port Charlotte doesn’t offer much– “There’s nothing really special about us” – and even though people go on the Peace River for jet-skiing or other activities, the water is practically gray.

“You can’t really see through it at all,” he said.

‘A hit with the neighborhood’

Teesnap offers tee-time scheduling, website management and other services. The business is led by CEO Bryan Lord, who pitched the concept to Gallagher because Allegiant flies to major golf destinations, Grey said.

Teesnap was founded in 2013, and Allegiant has owned it since day one, she said.

We don’t have anything like that in the area

Marilyn Zeigler, a property manager with Bostick Holdings, Allegiant’s landlord in Warren, said the business has been “a hit with the neighborhood.”

“We don’t have anything like that in the area,” she said.

Regan Heckethorn, vice president of operations for Allegiant Entertainment, said the game centers bring jobs and excitement to a neighborhood, and the company plans to open three to five annually.

It’s also a relatively low-risk venture whose ultimate goal, she agreed, is to get people to buy more plane tickets on Allegiant.

History of side ventures

Gallagher’s personal side businesses have also been varied.

In 2014 Gallagher bought Chapel of the Flowers, a wedding chapel on Las Vegas Boulevard between the Strip and downtown, county records show. That same year, Allegiant bought back 200,000 shares of company stock from Gallagher for more than $25 million, saying he planned to use the proceeds “for other ventures he is pursuing personally.”

Chapel of the Flowers, a wedding chapel on Las Vegas Boulevard, is photographed on Thursday, June 20, 2019.

Gallagher’s side projects have also signed lucrative deals with his airline.

Allegiant paid about $1.3 million between 2011 and 2013, as well as $2.5 million in 2015, to sponsor a race-car team controlled by Gallagher, according to filings with the Securities and Exchange Commission.

Gallagher’s son, Spencer, raced for his dad’s team for years and announced his retirement from racing last fall at age 28.

Allegiant, through its subsidiary Game Plane, also paid about $2.8 million in 2014 and $400,000 in 2015 to Alpine Labs to produce and distribute game shows filmed on its flights. Gallagher owned a 25 percent stake in Alpine and was on its managing board, according to SEC filings.

Moreover, between 2014 and 2017, Allegiant paid about $5.6 million to entities owned or controlled by Gallagher for corporate training content, filings show.

Allegiant’s audit committee signs off on these “related party transactions.”

Overall, with Allegiant Travel itself now venturing outside aviation, the company is “trying to do something very different” than other airlines and is the “perfect definition” of a niche carrier, said Sorensen, of IdeaWorksCompany.

“In the entire world, there’s no one like them,” he said.