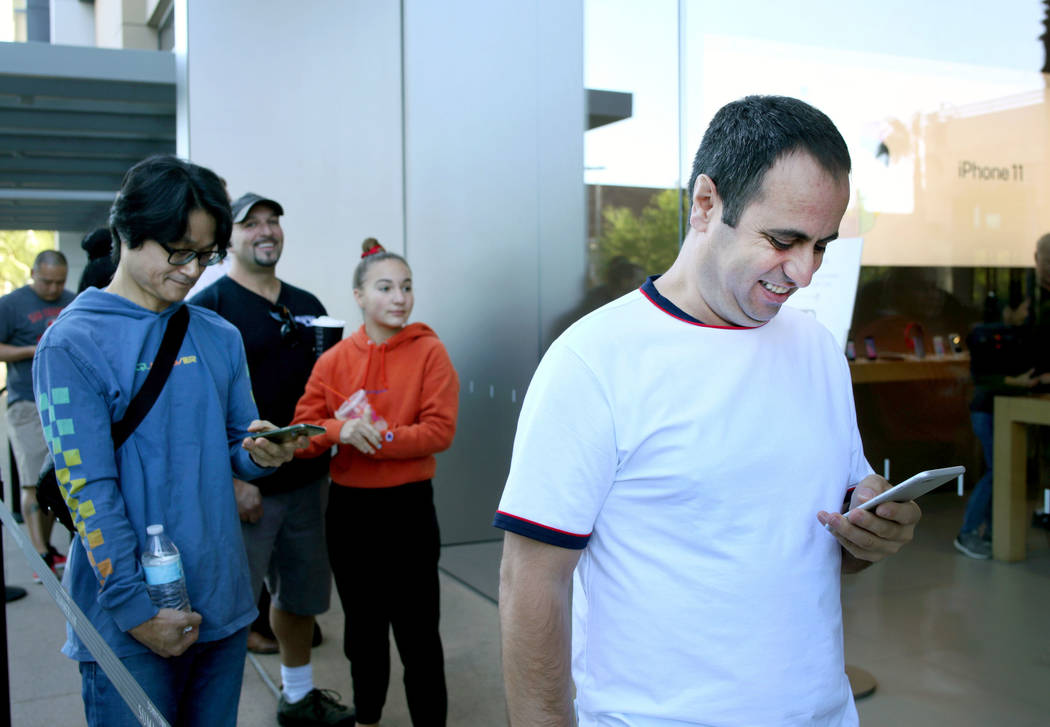 Las Vegas local Bledar Kodra stands at the head of the line with others for the release of the new iPhone 11 at the Apple Store at Downtown Summerlin on Friday, Sept. 20, 2019 in Las Vegas. (Elizabeth Page Brumley/Las Vegas Review-Journal @EliPagePhoto) 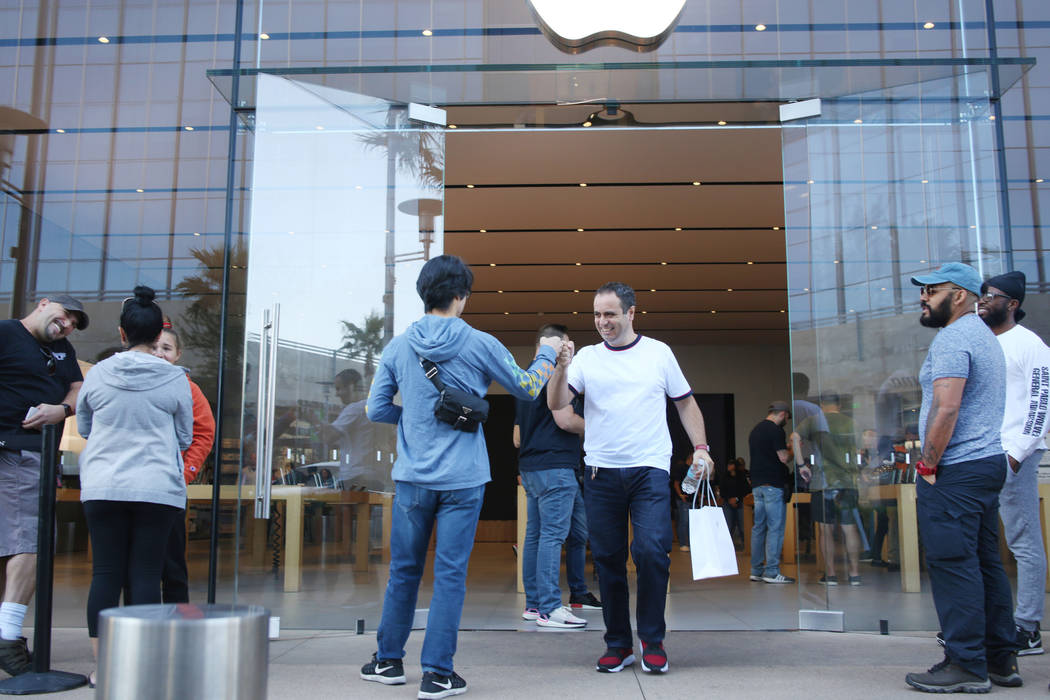 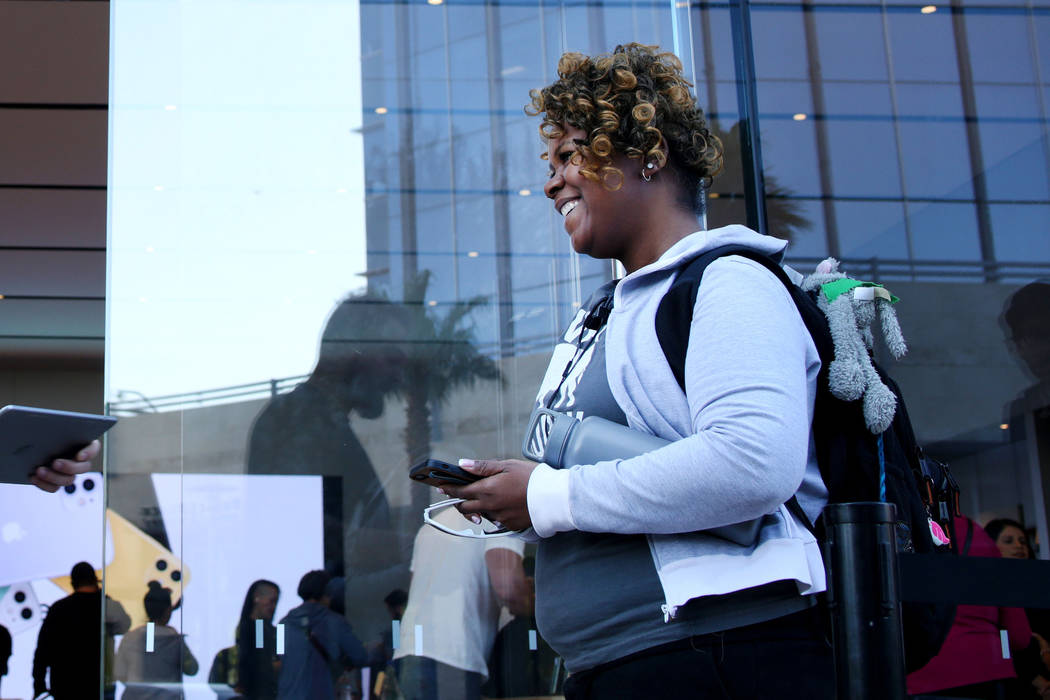 Las Vegas local Kenni Vogrich checks in to purchase her preordered iPhone 11 during the release of the newest iPhone at the Apple Store at Downtown Summerlin on Friday, Sept. 20, 2019 in Las Vegas. (Elizabeth Page Brumley/Las Vegas Review-Journal @EliPagePhoto) 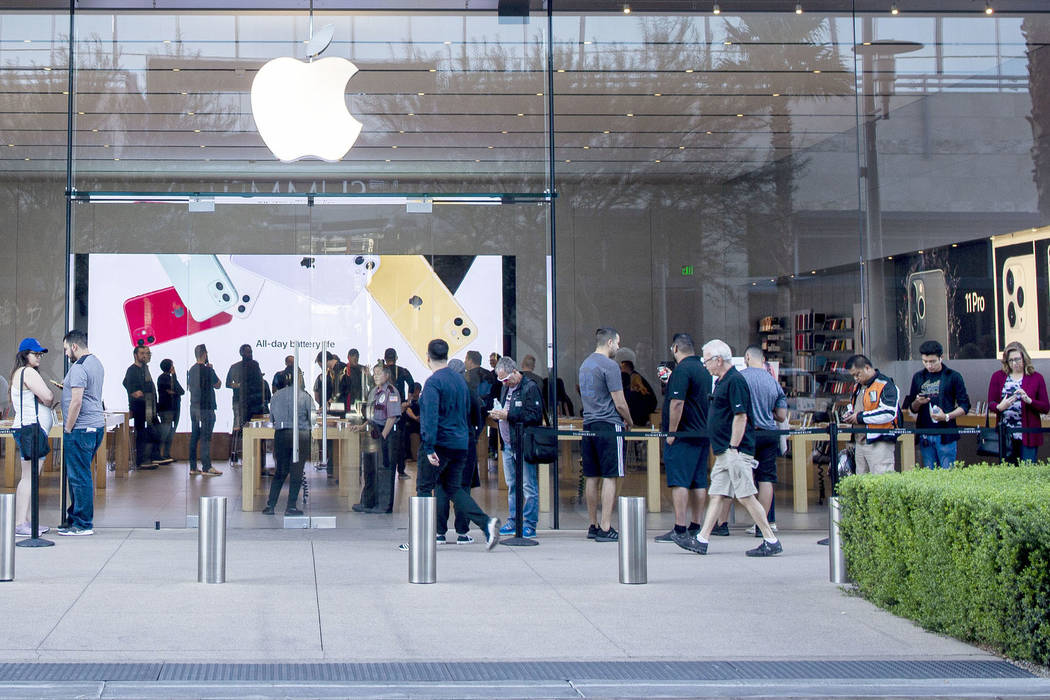 Individuals stand in line for the release of the new iPhone 11 at the Apple Store at Downtown Summerlin on Friday, Sept. 20, 2019 in Las Vegas. (Elizabeth Page Brumley/Las Vegas Review-Journal @EliPagePhoto)

Apple Store employees gave a standing ovation as customers eager to get their hands on the latest iPhone entered the Downtown Summerlin shop early Friday morning.

Shoppers were lined up outside the Summerlin store by 7 a.m. to await the store’s 8 a.m. opening on Friday, which marked the global launch of Apple’s iPhone 11 and other new products.

The lines — one for walk-in customers and a second for reservations — were fairly short at first compared with previous years but by the time the glass doors opened at 8 a.m., the line was about to wrap around the building.

Bledar Kodra, who has owned an iPhone since its first release in 2007, was one of the first customers when he arrived at about 7 a.m. and was surprised he could snag a spot near the front of the line.

“I’ve never seen a short line,” Kodra said. “Oh my gosh, before it would wrap around the building. Last year, I ordered [the iPhone] and it came to my house.”

Cupertino, California-based Apple can always count on die-hard fans to wait in line every September, but the hype has appeared to wane this year as iPhone sales have underperformed.

For the third quarter ended July 30, the company reported a 12 percent drop in iPhone sales to $26 billion and noted revenue growth was being fueled by its services such as Apple Music as well as wearables, iPad and Mac sales. Its quarterly revenue was $53.8 billion, up 1 percent year-over-year.

Ben Arnet said he had been planning a trip to the store on Friday to replace a broken iPhone but realized only Thursday night that a new phone was launching the next morning.

“I had to look at the times the store opened on my girlfriend’s phone and it said special hours and I said that’s got to mean they’re launching something,” said Arnet, who planned to get Apple’s top-of-the-line iPhone 11 Pro Max.

The president of Las Vegas-based LED cannabis grow lighting company Fohse Inc. said his entire business is run from his phone so he showed up early to try and beat the line — on his birthday — before heading into the office.

Fans didn’t see drastic changes to the phone’s design, but the models do come with a number of upgrades, including a triple camera system on the Pro models while the iPhone 11 comes equipped with a wide and ultra-wide lens.

Other features introduced include a new night mode, longer battery life and an updated processor, which Apple touts as “the fastest ever chip in a smartphone.”

Fabian Hernandez, who arrived at Downtown Summerlin with two colleagues, said this year’s release is “nothing really to write home about, other than the cameras.”

While Hernandez had a more subdued outlook on the iPhone, he was interested for the Nov.1 launch of Apple TV+, a streaming video service at $4.99 per month, which pits Apple against the likes of Netflix and Hulu.

“I’m excited for that,” Hernandez said.

Customers who purchase any iPhone, iPad, Apple TV, iPod or Mac will receive a free one-year subscription to Apple TV+.

“All I do is Netflix and YouTube TV. I don’t have any cable or anything so if it has good content, I’m in,” he said.

Kenni Vogrich came prepared. The Las Vegas resident made an appointment online to pick up the iPhone 11 Pro Max in midnight green as well as the Apple Watch 5.

“I knew what I wanted after I watched the keynote,” she said. “I’m excited. It’s a lifestyle.”

Vogrich noted that for her, it’s not merely a phone or a watch. The devices, which offer features such as fall detection, FaceTiming, and heart rate monitoring, are important for her health, she said, noting she has “a heart valve thing.”

“It’s expensive, but it’s worth it in my opinion.”

But Vogrich said it’s not worth waiting in line, pointing to the line of customers without appointments, because Apple allows shoppers to preorder products to be shipped to their home or to make in-store appointments.