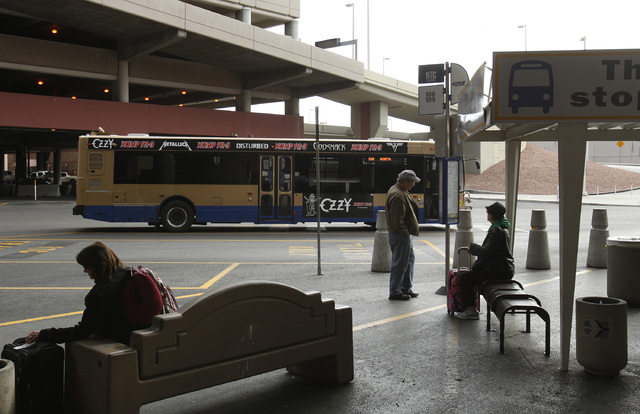 A Regional Transportation Commission of Southern Nevada bus makes a stop in 2014 at Terminal One at McCarran International Airport. The RTC recommends arriving at the bus stop no more than 10 minutes before the bus’ scheduled stop time to minimize heat exposure. (View file photo)

To an average rider, the Regional Transportation Commission’s task looked simple: Create a slight detour for one of the three bus routes serving McCarran International Airport to include a stop at Terminal 3.

The commission wasn’t pressed for time. The terminal opened in June 2012 and had been in planning and under construction several years before that.

Buses will finally get to the terminal starting March 2. The Westcliff Airport Express and the Centennial Express, both of which terminate in the northwestern valley, will include Terminal 3 in their schedules. The service will run hourly at different times, except for weekday stretches when Centennial will run on half-hour frequencies.

The commission waited for its share of sales tax revenues to increase before starting this new service, spokeswoman Angela Torres Castro said. That extra stop will cost the agency about $400,000 a year.

“To add these stops, we had to change the arrival and departure times throughout these routes,” she wrote in an email.

Because the routes are structured as a grid, she said, reworking one route can set off a domino effect that can quickly drive up costs.

The cost would have been about the same had Route 109, which already passes the edge of Terminal 3 on East Russell Road, been changed to stop. Doing so, Castro said, would have boosted the entire route time by five to 15 minutes and slowed the trip for about 9,000 people a day, most of whom don’t go to the airport.

Kansas City, Mo., has little outward resemblance to Las Vegas. But the issues addressed at the Jan. 14 meeting of the Airport Terminal Advisory Group, a volunteer panel examining options for Kansas City’s aging and cramped airport, hit close to home.

That morning, a pair of top executives from Southwest Airlines, the leading carrier into Kansas City, spoke for the other airlines when cringing at a proposed rebuild costing more than $1 billion. The industry benchmark they mentioned several times during their argument, cost per enplanement, has also arisen in discussions over McCarran International Airport.

“Route decisions are totally demand-driven,” said Ron Ricks, Southwest’s executive vice president and chief legal and regulatory officer. “Terminals themselves do not generate demand and do not impact demand as a general proposition.”

To ensure no one missed the point, Southwest Vice President of Airport Affairs Bob Montgomery asked rhetorically, “Do terminal facilities attract service? The answer to that is ‘no.’ Otherwise, no one would fly to LaGuardia (in New York) and San Diego would have great trouble.

“We need a gate,” he said. “But for virtually everything else, we do what we need to do.”

In Kansas City’s case, the panel said it would be nice to have better restrooms, more concessions and larger waiting areas. But they spoke favorably of other airports that slashed budgets when planning new or better facilities.

This stems from airlines paying attention to cost per enplanement — the bundle of the fees and rents carriers pay, calculated as a per-passenger average — rather than jaw-dropping architecture, he said. Airlines won’t specify how cost per enplanement affects their scheduling of planes, except to say it matters.

“Cost per enplanement does impact whether we are profitable or not,” Montgomery said. “But there is not a direct relationship.”

Local tourism officials have touted McCarran’s $2.4 billion Terminal 3, opened in June 2012, for helping to bring the heftier flight schedules the visitor industry craves. But the expense, combined with lower traffic since the recession, has more than doubled the cost per enplanement from $5.50 in 2007 to $12.22 last year.

Executives at Las Vegas-based Allegiant Air have cited the costs as a deterrent to adding flights, but no one else has.

“The industry is not expected to grow much,” he said. “Most of the growth will come from international markets.”