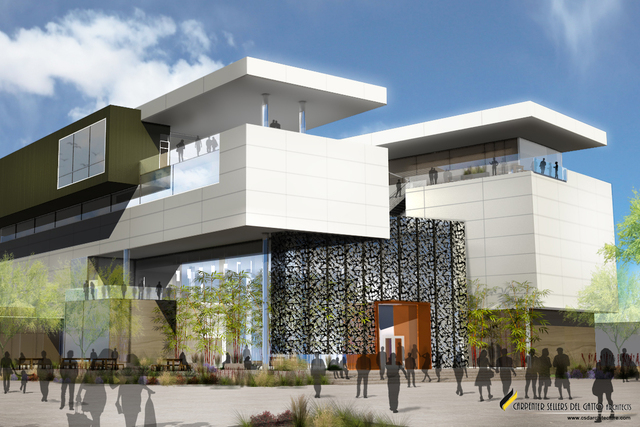 A rendering shows the $56 million building that will house the Harrah College of Hotel Administration at UNLV. Construction on the building, which has been in the planning stages for more than 10 years, is expected to begin by the end of the year. (Courtesy University of Nevada, Las Vegas) 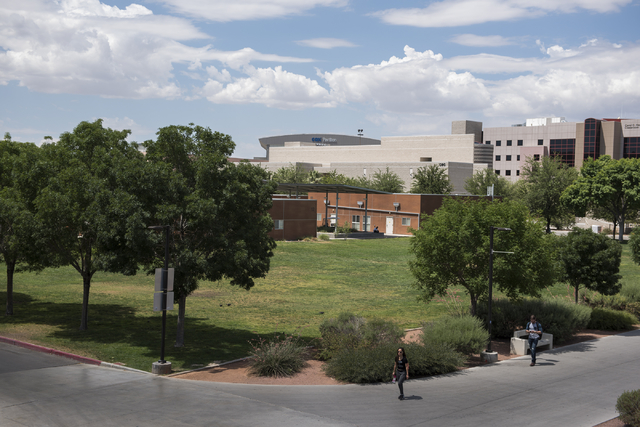 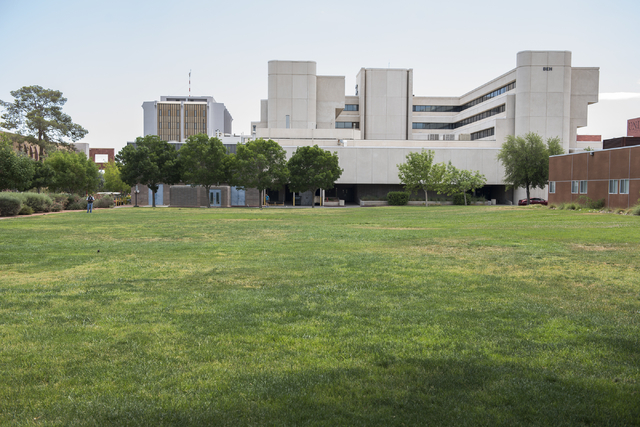 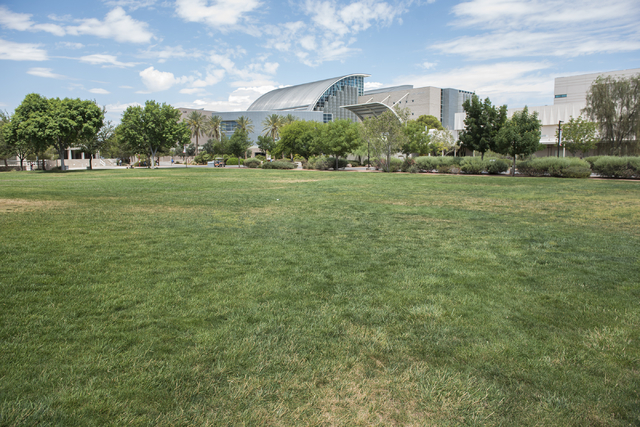 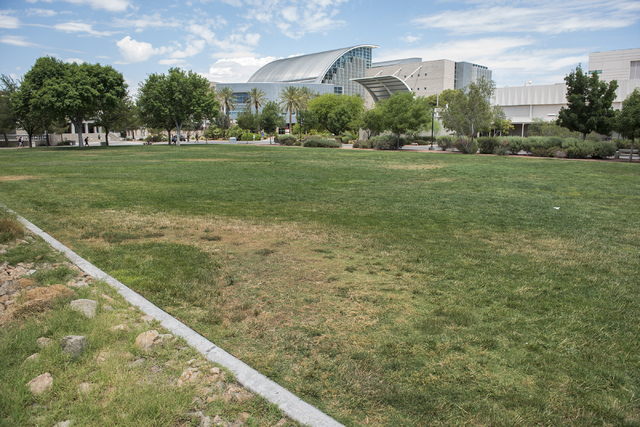 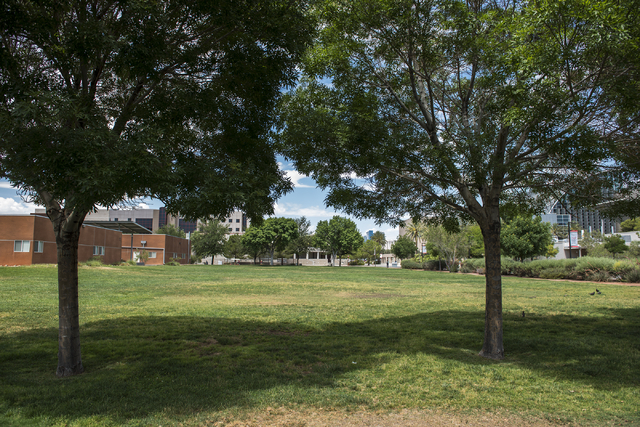 The building that houses the University of Nevada, Las Vegas Harrah College of Hotel Administration is outdated.

But a new one is coming.

Thanks to Gov. Brian Sandoval’s signature, the $56 million Hospitality Hall will soon rise at the center of the UNLV campus. Along with the building is a new focus by the college emphasizing hospitality, which reaches far beyond the traditional hotel industry.

“We’re more than just hotel administration,” said Stowe Shoemaker, who has been the college’s dean since 2013. “This industry is about the integrated resort. No other school in the world does gaming like we do.

“We want to create an environment where students are immersed in the industry.”

Sandoval signed an appropriations bill 10 days ago that included $24.4 million in funding for the 96,000-square-foot Hospitality Hall, which will be behind the hotel school’s current home in Beam Hall. Construction begins in the fall. The opening in late 2017 will coincide with the 50th anniversary of the hotel school’s creation.

When the college was introduced in 1967, Nevada was the only state with legalized casinos. The school was seen as a way to supply the growing Strip with an educated workforce.

Things have changed in 50 years.

Today, 40 states have some form of casinos — land-based, riverboat, racetrack or tribal. The traditional hotel industry has found its way into gaming and the hospitality industry looks to UNLV to supply its workforce.

“We’re the largest contributor of employees to some of the biggest hospitality companies in the world,” Shoemaker said.

Hospitality Hall is two years away, but the new curriculum is underway. It includes a partnership with UNLV’s new medical school that will focus on patient satisfaction, a growing trend in the health care industry.

“We don’t want to just move our same program into a brand-new building,” Shoemaker said. “The building is a rallying point for a curriculum change that says what hospitality and gaming education should look like in the 21st century.”

The college has 2,500 undergraduates. Shoemaker said Hospitality Hall allows the school to add another 500 students.

About 50 percent of the school’s students are from states outside of Nevada. Another 25 percent are in-state students. The remaining 25 percent are international students, predominately from Asia. Shoemaker envisions growth coming from more non-Nevada students.

He also plans to implement a program for current Las Vegas hospitality industry employees to complete or earn a degree.

Hospitality Hall has been planned for almost 11 years. The project was shelved during the recession but was revived when former Boyd Gaming Corp. President Don Snyder became the college’s dean in 2010.

His first order of business was to move the planned building to the center of UNLV from a site next to the Stan Fulton Building — home of the International Gaming Institute — near Flamingo Road.

“It needed to be in the heart of the campus,” Snyder said. “The college is important to the national and international reputation of the university.”

He also wanted to ensure the building would offer Strip views from its upper floors.

“We have the world’s largest living laboratory right outside our door,” Snyder said of the more than 151,000 hotel rooms in Las Vegas.

Snyder turned the project over to Shoemaker when he moved into a strategic development position with the university. After serving as UNLV’s acting president for a year, Snyder has moved back into a strategic adviser role. One project on Snyder’s agenda is completing Hospitality Hall.

“I see the building as a bridge from the school’s first 50 years to its next 50 years,” Snyder said.

UNLV has raised more than $15 million for the building from donors. Shoemaker is confident that the school will raise the other $15 million by year’s end. So far, Boyd Gaming Corp., MGM Resorts International, Caesars Entertainment Corp., Konami Gaming, Station Casinos and Las Vegas Sands Corp. have committed funding.

Shoemaker is also looking beyond gaming; he said he has talked with “major” hospitality companies.

“When they graduate, we want the hospitality industry to look at our students not as employees, but investments,” he said.

Shoemaker and Snyder said the building won’t carry the name of a particular donor.

Snyder said the funding method for the new building is similar to the one used to help build The Smith Center for the Performing Arts in downtown Las Vegas. “Founding donors” are being sought to join the companies that have already made their commitments.

“This is a building for the hospitality industry, and built by the industry,” Snyder said.

Stowe said the college’s curriculum will change to reflect all aspects of hospitality. UNLV’s International Gaming Institute is already part of the hotel school and joint programs are planned with UNLV’s Boyd School of Law, which has greatly expanded its gaming law program.

Shoemaker spent nine years as a professor at UNLV before leaving in 2004 for a similar position at the University of Houston. He returned to UNLV as a professor in 2012.

“Hospitality is not a job, it’s a lifestyle,” Shoemaker said. “I want the college to create an environment where students are immersed in the industry.”

Howard Stutz’s Inside Gaming column appears Wednesdays and Sundays. He can be reached at hstutz@reviewjournal.com or 702-477-3871. Find him on Twitter: @howardstutz