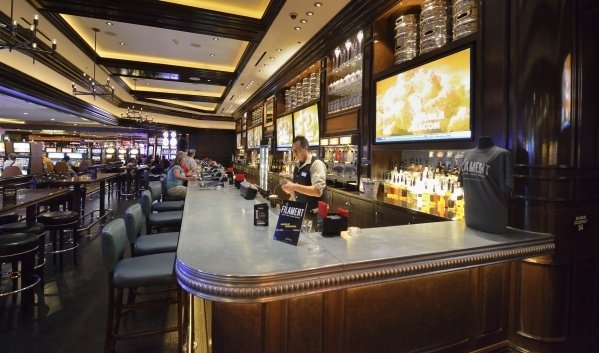 The Filament Bar is shown at the Fremont hotel-casino at 200 Fremont St. in Las Vegas on Monday, Nov. 2, 2015. Bill Hughes/Las Vegas Review-Journal 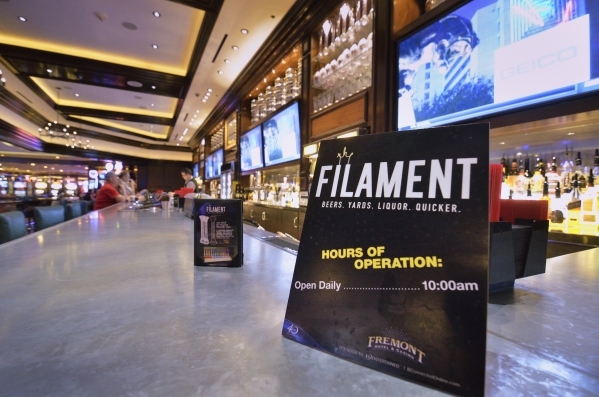 The Filament Bar is shown at the Fremont hotel-casino at 200 Fremont St. in Las Vegas on Monday, Nov. 2, 2015. Bill Hughes/Las Vegas Review-Journal

Through September, downtown casinos have seen gaming revenue increase almost 6 percent compared to 2014. During those same nine months, the Strip is down 1.5 percent.

Downtown gaming revenue has increased in eight consecutive months, including September’s 9 percent jump. The market has shown upticks in 12 of the last 14 months.

He visited the East Fremont area, which he believes is helping fuel downtown’s revival by attracting both tourists and local residents to new restaurants, “hip” retail venues in Container Park, and special events. McKnight credited the Downtown Project, which was tasked with developing new business ventures in the area.

“In our view, these exciting developments have largely passed under Wall Street’s radar despite out-sized growth for Boyd’s three downtown assets in the third quarter,” McKnight said.

The analyst met with executives from some of the Fremont Street casinos who offered their take on why downtown is growing.

In 2014, downtown casinos collected 52 percent of their revenue from gaming. McKnight expects the nongaming revenue slice of the pie to surpass the casino total as resorts operators mirror some of the restaurant, beverage and retail additions being offered on the east side.

For example, Boyd Gaming added California Noodle House, an Asian-themed eatery, to the California in January. The Filament Bar opened in July at the Fremont.

“These new visitors frequent local bars, restaurants and lounges in the area, but generally do not gamble much,” McKnight said.

“Doing this without alienating the current core slots customer is a tricky balancing act,” McKnight said. “We believe there is certainly an opportunity for downtown to improve revenues from both gaming and nongaming streams this year.”

Boyd Gaming’s three downtown casinos rely heavily on the company’s Hawaiian charter service to bring guests from the islands. Redeveloped resorts, such as the D Las Vegas, Golden Gate, El Cortez, Plaza, Golden Nugget and Downtown Grand, have helped attract a mix of locals along with the tourist base.

The recent purchase of the shuttered Las Vegas Club by D Las Vegas-Golden Gate owner Derek Stevens could add a revived casino property to the corner of Fremont Street and Main Street.

McKnight said special events, including September’s “Life is Beautiful” festival, free concerts on stages along Fremont Street, and major entertainers — such as “Imagine Dragons” — using downtown as backdrop for music videos, all play a part in bringing customers downtown and away from the Strip.

“Downtown Las Vegas has a growing nightlife scene that is preferred by some locals and tourists given it’s more affordable and geared towards traditional bars versus velvet-roped nightclubs,” McKnight said.

The analyst offered another theory on why locals are visiting downtown: the emergence of ride-hailing companies Uber and Lyft to Southern Nevada. Although it is still “hard to quantify” their contributions, the services make the trip easier for suburban residents in Summerlin and Henderson, who often found it challenging to lure traditional taxi drivers away from the Strip.