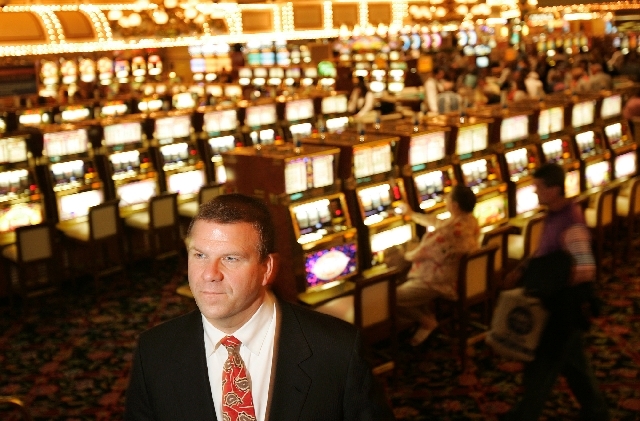 Tilman Fertitta, shown inside the Golden Nugget in Las Vegas, is expanding his business empire through casino acquisition and development. 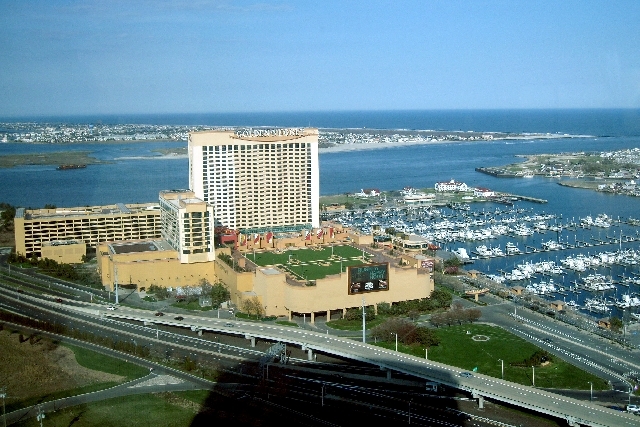 The Golden Nugget Atlantic City, as seen from the top of the Water Club at Borgata, is owned by Tilman Fertitta's Houston-based Landry's Inc.

It’s going to take another few years to analyze the business’s level of success.

Not that Fertitta is in a rush.

The company added a new hotel tower to the downtown property and other amenities, such as a 200,000-gallon live shark tank. The Laughlin casino also was cleaned up. Both properties received restaurants from the Landry’s collection — Vic & Anthony’s Steakhouse in Las Vegas and a Salt Grass Steak in Laughlin.

Fertitta’s $1.4 billion buyout of Landry’s in 2010, in which he took private the public company he founded in 1986, paved the path for a casino shopping spree.

With the announced acquisition of Ameristar Casinos’ development project in Lake Charles, La., on July 24, Fertitta served notice to the gaming industry that he is all-in.

By 2014, when Lake Charles is expected to open, Fertitta’s Golden Nugget brand will include five casinos. That doesn’t account for the possibility of more purchases down the road.

Fertitta spent $38 million in 2011 to buy the run-down Trump Marina in Atlantic City and $45 million last year to acquire the Isle of Capri Biloxi in Mississippi.

He rebranded both casinos as Golden Nuggets, spending more than $100 million each to clean up the properties, renovate the casino floors, add new amenities and drop in some of Landry’s familiar restaurants.

In Atlantic City, the casino now has a Chart House and Vic & Anthony’s. Biloxi will soon be home to a Morton’s Steakhouse and a Bubba Gump Shrimp Co.

The purchase of the Ameristar development — Louisiana’s last remaining gaming license — gives Fertitta the chance to design a facility from the ground up.

He said the project would have a $600 million budget — up from Ameristar’s announced $580 million figure — and include an 800-room hotel-casino, a Vic & Anthony’s and Grotto Italian Ristorante from Landry’s restaurant portfolio. It also has an 18-hole championship golf course.

At a minimum, Fertitta will cover the development costs Ameristar has spent to date on the 242-acre property — $213.9 million as of June 30 — and assume all other outstanding costs, minus a $37 million credit.

Lake Charles is just 144 miles from Fertitta’s hometown of Houston. The new casino will provide direct competition for the southern Texas customer base of Pinnacle Entertainment’s neighboring L’Auberge Lake Charles.

“I could not pass up the opportunity to build and operate a casino next door to my hometown,” Fertitta said in a statement. “This casino will be where Louisiana locals and Texans will want to play, stay and enjoy themselves.”

Simkins said Fertitta would be able to cross-market his restaurants — Landry’s has more than 100 dining venues in southern Texas — with the new Lake Charles casino.

Coupled with his success in the restaurant and entertainment businesses, Fertitta seemed destined for gaming.

There are similarities within the family.

Last year, all three Fertittas were ranked on the Forbes 400 List of Richest Americans.

As of March, Tilman was in 298th place with a net worth of $1.7 billion. The Fertitta brothers dropped off the list, but are expected to make a return by year’s end.

The Fertitta brothers made a $2 million investment to buy the struggling Ultimate Fighting Championship in 2001. Today, the UFC is worth an estimated $2 billion or more.

It seems most of the Fertitta family investments — both in Texas and Nevada — have held up, even with Station Casinos’ financial restructuring completed in 2011.

After purchasing the two Golden Nuggets in 2005, Tilman Fertitta told me in an interview that he passed on buying the Riviera on the Strip because he thought Golden Nugget would be a better brand to take into regional and riverboat gaming markets.

He is now fulfilling that promise.