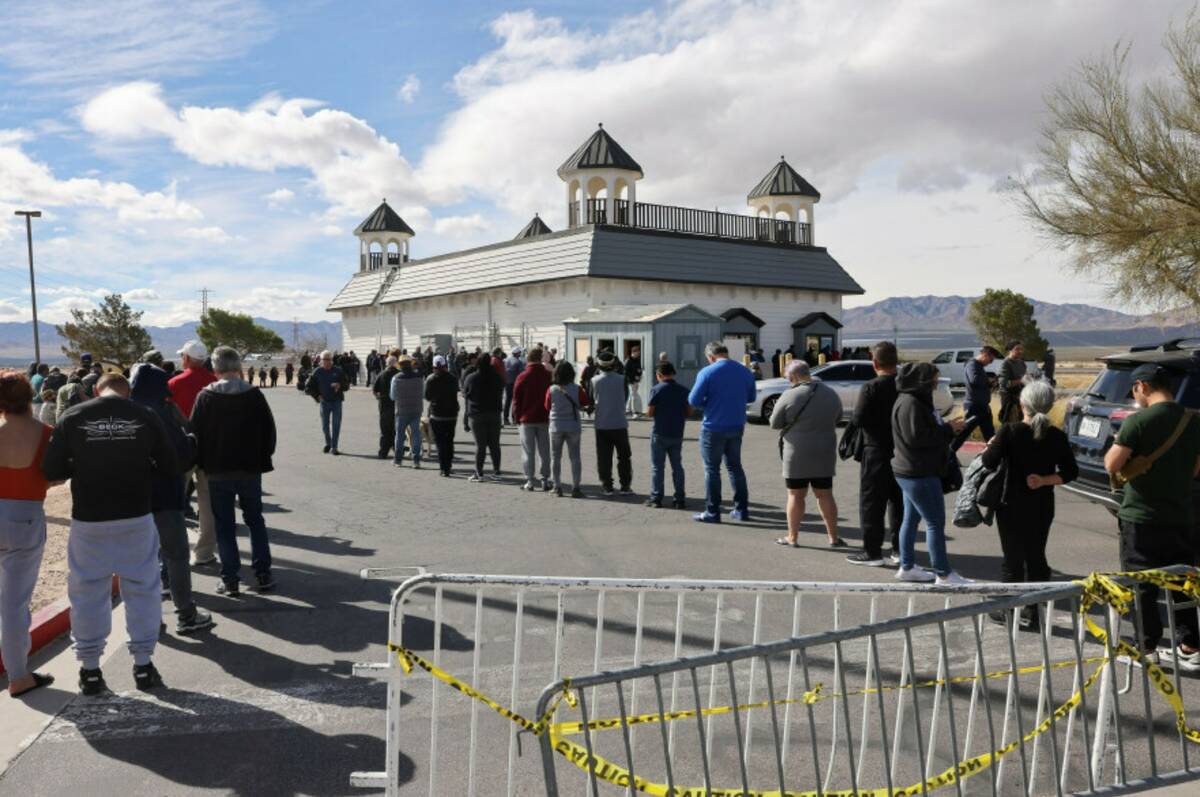 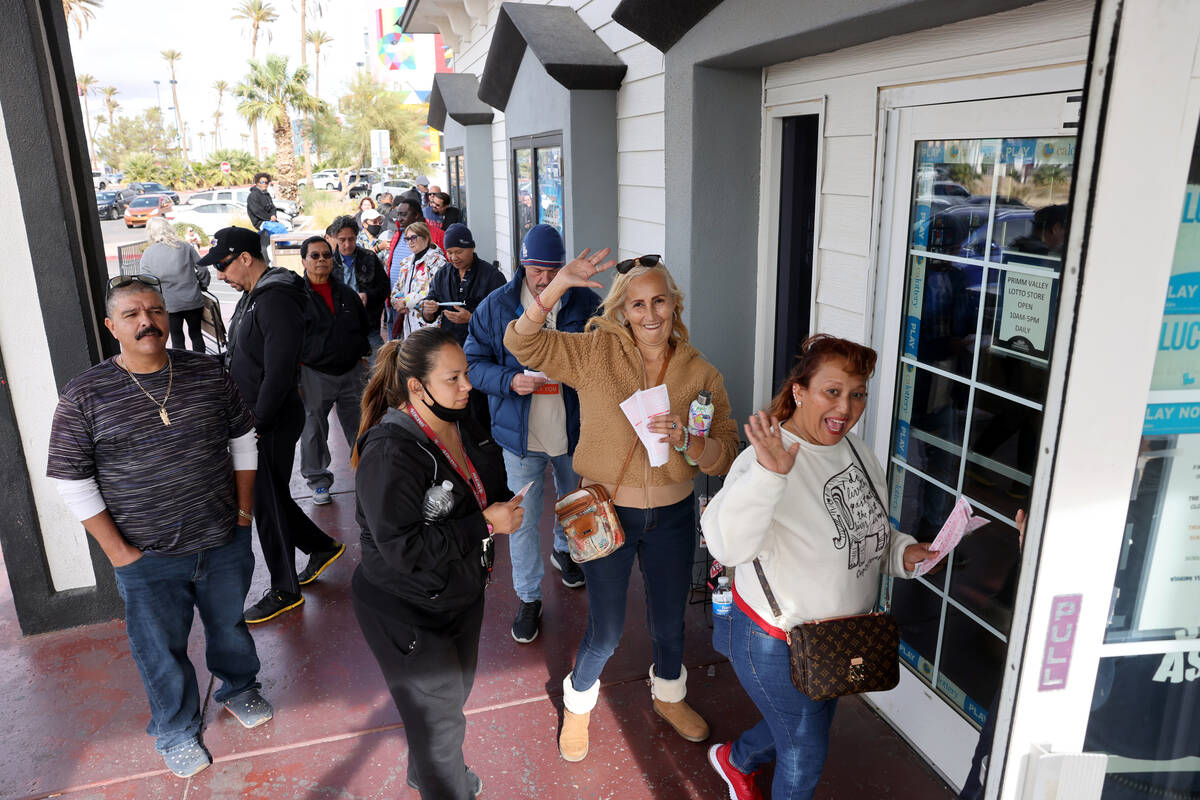 Jessica Palomino, from left, Rosa Plata and Ana Santiaguin, all of Las Vegas, wait in line to buy lottery tickets at the Lotto Store just across the Nevada/California border near Primm on Monday, Nov. 7, 2022. (K.M. Cannon/Las Vegas Review-Journal) @KMCannonPhoto

Nevada prides itself in having the most experienced gaming operators and regulators in the world.

But there are at least two categories the state not only doesn’t lead, but doesn’t participate in.

Internet gambling, or iGaming, is barely on Nevada’s radar, even though six states already have legalized and launched it while a handful of others are contemplating legislation that would allow it. Nevada offers only online poker — and it hasn’t been that impactful.

Nevada also is one of five states that doen’t have a state lottery, or access to the big-ticket multistate lotteries that routinely grab headlines with jackpots in the hundreds of millions of dollars. Although, that doesn’t keep Nevadans from heading to the California and Arizona borders to participate in some of those big drawings.

Both lotteries and iGaming were topics at this month’s National Council of Legislators from Gaming States, a four-day conference for state lawmakers, held at Resorts World Las Vegas.

While Nevada is among the 22 members of the NCLGS, there were no listed attendees from our state, although some local lawmakers may have dropped in for some of the panel discussions and committee meetings.

Every time there’s a big Powerball or Mega Millions jackpot you’ll hear Nevadans lament how a lottery could provide millions of dollars toward supporting education, health care or some other underfunded need in our state.

The reality is that the strong casino lobby — some of the leading industry voices for or against any legislative proposal — works to thwart a lottery as potential competition for discretionary entertainment dollars in casinos.

I find it interesting that in Massachusetts casinos are required to provide sales outlets for its state lottery as a condition of their licensing.

Likewise, there seems to be no appetite to expand iGaming in Nevada.

Panelists at the NCLGS conference said iGaming is a growing industry. That’s affirmed in a report this month by gaming industry analyst Carlo Santarelli of Deutsche Bank.

According to Santarelli’s iGaming report, gross gaming revenue for iCasinos from January through November 2022 is up 36.3 percent year-over-year to an estimated $4.5 billion. That’s on top of a 138.9 percent increase from 2020 to 2021.

In the NCLGS panel, Howard Glaser, global head of government affairs and legislative counsel at Las Vegas-based Light and Wonder, said legislation is expected to be debated in New York, Indiana, Illinois and Iowa next year and lawmakers in Maryland, Ohio, Colorado, Louisiana and Kansas are looking at iGaming bill introductions.

“iGaming is the single most successful launch of a casino product in the history of the United States, if not globally,” Glaser said. “You can see that in the numbers. In the last 12 months, in just six states, they’ll do $5 billion in gross gaming revenue. If you think of the gaming market as a whole, $50 billion in U.S. commercially, that’s about 10 percent of the market and that’s six states compared with every state in the U.S. that has commercial casinos.”

Glaser said in post-COVID America, state revenue isn’t nearly as important as it once was because the federal government has stepped in and plugged many state budget holes with pandemic relief.

Casino companies are resistant to iGaming because they fear an abundance of online customers would cannibalize patronage of brick-and-mortar properties where additional revenue can be realized in other casino amenities. While iGaming proponents say internet play enhances companywide revenue, Santarelli’s report suggests there’s evidence online play does cut into casino revenue because the post-COVID recovery was stronger in states that haven’t legalized online casinos.

“When looking at the performance of casino gross gaming revenue in Pennsylvania, Michigan and New Jersey, three states with iCasino that either launched in 2021, or doubled relative to 2019, brick-and-mortar casino comparisons have materially lagged comparisons in other markets across the Northeast, Midwest and Southeast,” Santarelli said.

“In total, across our seven-state regional subset, gross gaming revenue grew 12 percent in September, 17 percent in October, and 6 percent in November, relative to 2019. These results compare to the aggregate casino revenue performance of New Jersey, Michigan, and Pennsylvania, on a same-store basis, of -1 percent, -3 percent, and -12 percent for September, October, and November relative to 2019, respectively,” his report said.

So maybe Nevada casinos are right to be fearful that iGaming can hurt their overall bottom line.

But iGaming proponents say revenue generation is not the only benefit of internet casinos. They say law enforcement can track and stop illegal online operators easier, which the American Gaming Association is pressing for.

The internet has benefited from online commerce substantially over the years, and online gambling appears to be an opportunity for some states.

Whether Nevada will step up and attempt to take a leadership role in that category remains to be seen.