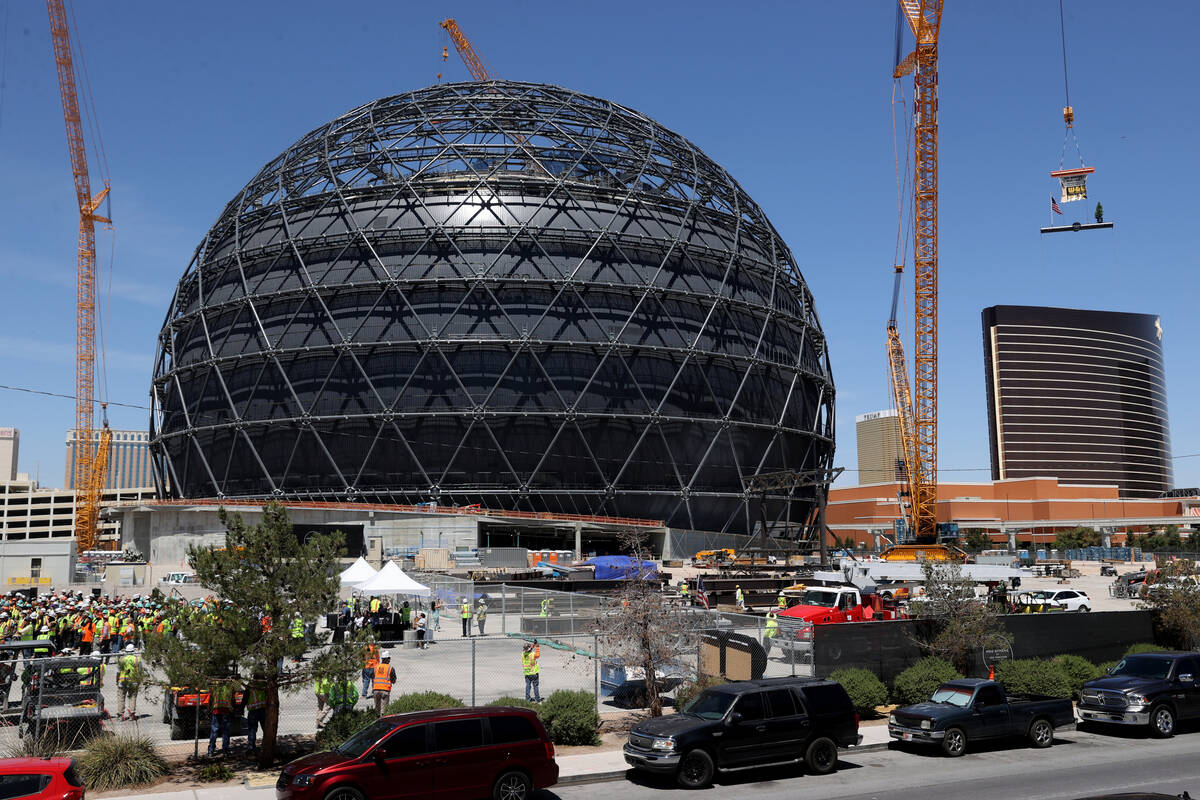 The final beam lifted to be placed at the top of the MSG Sphere at The Venetian during a topping-out ceremony at the entertainment venue in Las Vegas Tuesday, May 24, 2022. (K.M. Cannon/Las Vegas Review-Journal) @KMCannonPhoto 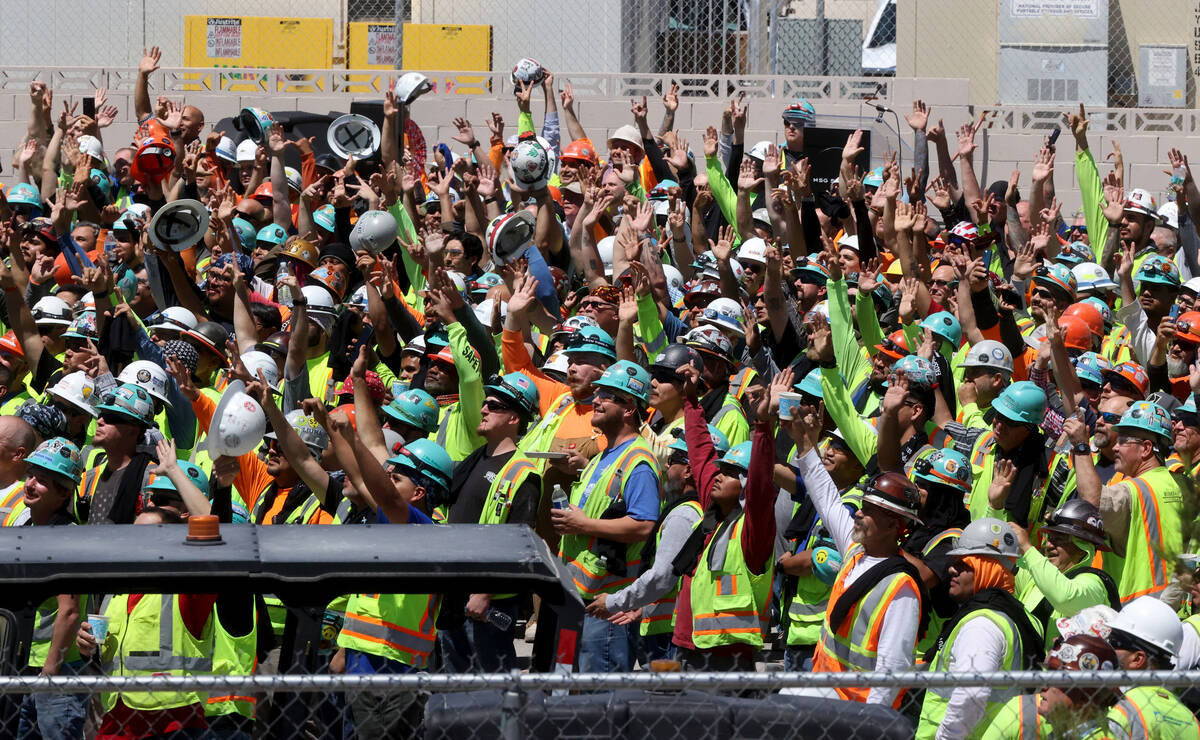 Workers cheer as the final beam is raised to be placed at the top of the MSG Sphere at The Venetian during a topping-out ceremony at the entertainment venue in Las Vegas Tuesday, May 24, 2022. (K.M. Cannon/Las Vegas Review-Journal) @KMCannonPhoto 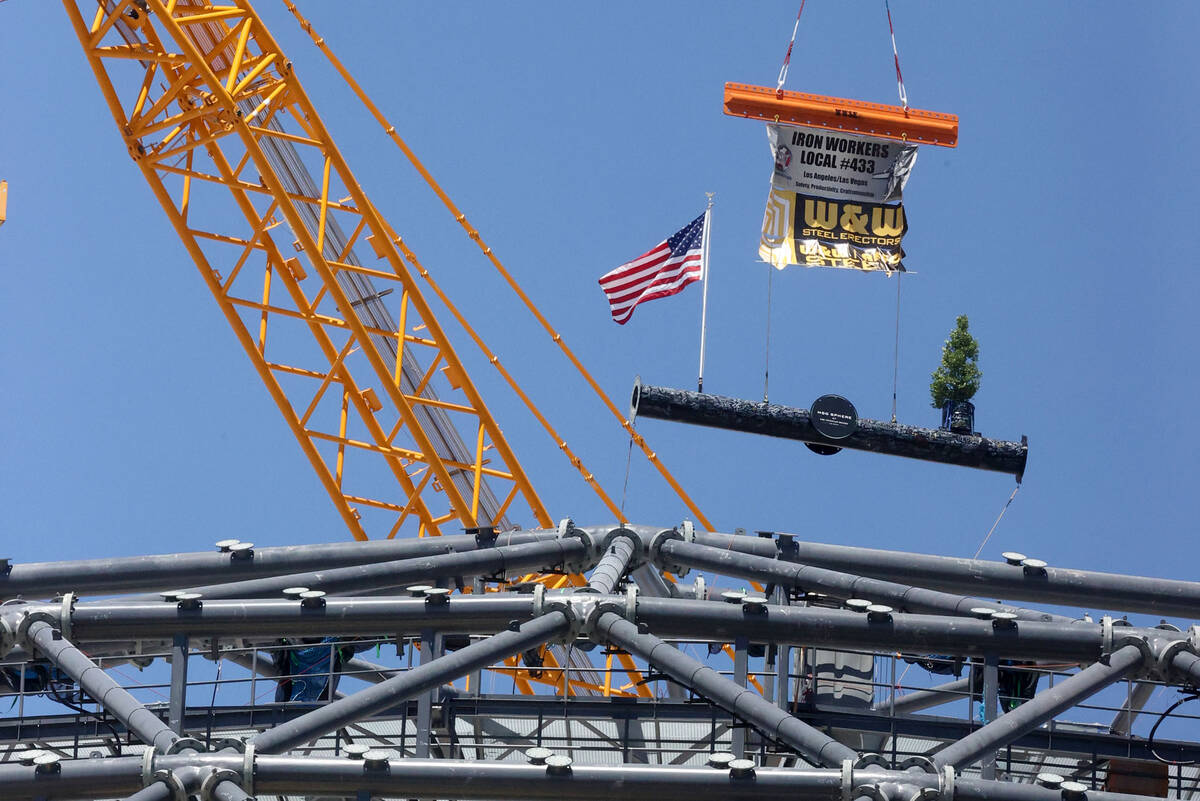 It’s easy to think of the MSG Sphere at The Venetian as a sports arena.

After last week’s 366-foot topping-out ceremony at the project site east of The Venetian Expo, I received emails and phone calls asking whether this new 17,500-seat venue could become the home for a NBA franchise.

Because of the spherical shape of the structure — its widest point is 516 feet — it would appear from the outside to have seating encircling a center point, like T-Mobile Arena or the Thomas &Mack Center. Instead, seating is on one side of the building, wrapping maybe two-thirds of the way around it, with seats pointed toward a stage.

The Sphere simply wouldn’t work as a basketball arena — unless you like watching basketball played on a stage.

Lucas Watson, president of the MSG Sphere, left a small opening for the building as a sports arena by saying it could host boxing, wrestling or mixed martial arts matches, or possibly esports tournaments.

The latter seems most plausible with all of the technology the $1.9 billion MSG Sphere will offer when the doors open in late 2023.

Among the Sphere’s features will be a 160,000-square-foot display plane — the size of about three football fields, wrapping behind, over and around the stadium-style seating. The high-definition screen will have resolution 82 times better than today’s television screens.

The sound system will provide crystal-clear audio — headset-quality sound without the headsets, MSG officials say. There will be 160,000 speakers surrounding the audience with an infrasound haptic system, meaning you’ll be able to feel the low bass sounds.

The Sphere will have the world’s largest beamforming sound system, which means sound can be directed within the building the same way that laser lights can be focused in a precise location. That means for presentations such as product introductions, a group of English-speaking attendees can sit in one area and a group of Spanish-speaking attendees in another, and the sound can be directed to each group without the need for headsets.

In a tour of building last week, before the topping-out ceremony, MSG executives took media members to a temporary platform between the sixth and seventh levels of the building to get a view of the stage from up high. Then, we were taken to the stage floor to get a performer’s perspective.

MSG officials haven’t revealed a lot of detail about what performers will be coming to the Sphere, but imagine the possibilities given all the relationships Madison Square Garden has with performers from all over the world. MSG is betting that performers will want to make the Sphere one of their tour stops.

Options could include residencies and one-off concerts for performers who could fill a 20,000-seat venue. There’s room for an additional 2,500 people for temporary seating or to stand.

With concert performances, Hollywood filmmakers are already at work preparing entertainment experiences that will use the massive screens and high-tech sound system in all-new presentations. Think of it like one of those dome-shaped planetarium presentations on a much grander scale with the audience immersed in a massive audiovisual fantasyland.

So don’t think of the Sphere as a sports arena.

It’s going to be much more than that.