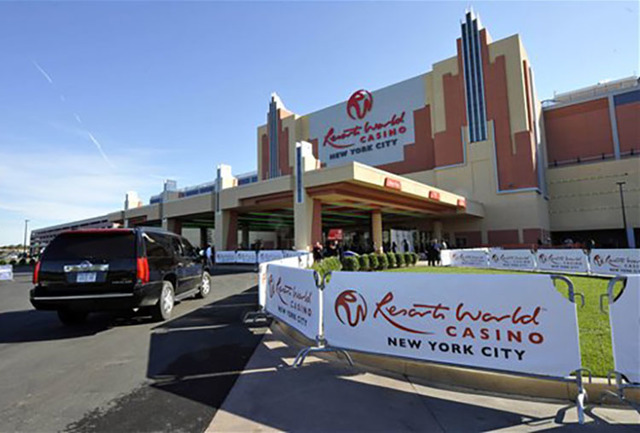 Resorts World Casino is shown on Oct. 28, 2011, the day of its official opening as New York City's first casino at the Aqueduct Racetrack. (AP Photo/Kathy Kmonicek)

New York is on track to collect more casino tax revenue than Nevada this year.

If that happens, Nevada — considered the gaming gold standard of the United States — will become the No. 3 state in the union for collecting tax revenue from the casinos within its borders.

Depending on how you look at it, that could be considered a good thing or a bad thing. But good or bad, that was one of the enlightening factoids that emerged from this year’s 48-page “State of the States” report from the American Gaming Association’s annual survey of the casino industry released a few weeks ago.

The gambling tax grand champion in the U.S.: Pennsylvania. It collected a whopping $1.38 billion in tax revenue, nearly $500 million more than what Nevada takes in.

New York is a relative newcomer to the industry, having legalized commercial gambling in 2001 and opening its first casino in 2004. The state has nine casinos operating from race tracks, and the bulk of the wagering — an estimated 70 percent — occurs at two properties close to New York City, the Resorts World Casino in Queens and the Empire City Casino in Yonkers.

If those trends continue, it’s easy to see New York’s gaming tax revenue surpassing Nevada’s, even though 2015 was a rebound year for it.

New York has the advantage of the massive residential market around New York City and an upswing in spending at commercial casinos. In that category, New York was up 2.8 percent to $1.95 billion. Nevada, meanwhile, was up 0.87 percent to $11.11 billion in casino spend.

But the big difference is more about tax rates than volume. Depending on the type of casino property, New York assesses tax rates of between 31 percent and 41 percent. Nevada has a graduated rate that maxes at 6.75 percent on the state side. County and municipal rates can add up to 1 percentage point to that level.

Pennsylvania is more of a gaming newbie than New York, having legalized casinos in 2004 and seeing its first opening in 2007.

In Pennsylvania, slot machines are taxed at 55 percent and table games at 16 percent. Tax revenue goes toward property tax relief, economic development, tourism, to the struggling horse-racing industry and to the general funds of local governments. Tax revenue climbed 2.34 percent in 2015 from the previous year.

The 12 casinos operating in Pennsylvania generated $3.17 billion in gross gaming revenue compared with that $11.11 billion in Nevada.

The Gaming Association, producers of the annual Global Gaming Expo in Las Vegas, tracks every state’s statistics and is now following tribal gaming more closely, providing information on how the casino industry impacts the communities in which they reside.

Steve Doty, director of media relations for the AGA, said he and his colleagues look for key trends when the report is released. This year, he said the association is seeing the massive expansion of gaming along the Interstate 95 corridor in the Northeast as a key talking point. That certainly matches my “aha” moment about New York and Pennsylvania, and Las Vegas companies are clearly in the game.

Massachusetts got into the casino business in 2015 with the opening of the Plainridge Park Casino near Boston. MGM is building MGM Springfield, scheduled to open in 2018, while Wynn Resorts expects to open Boston Harbor on the Everett, Massachusetts, Boston Harbor waterfront along the Mystic River in 2019.

The top 10 gaming revenue-producing markets are the Strip, Atlantic City and Indiana and Illinois Chicago-area casinos, which maintained their top-three ranking from last year. The rest of the top 10 includes New York City (up from No. 15), Detroit (down from No. 4), Baltimore-Washington, D.C. (new to the top 10), Philadelphia (down from No. 6), the Mississippi Gulf Coast (stayed at No. 8), St. Louis (down from No. 7), and Pennsylvania’s Pocono Mountains (down from No. 9).

Here are a few more market, revenue and tax tidbits gleaned from this year’s “State of the States”:

■ Although the No. 2 market, Atlantic City’s and New Jersey’s fortunes are sinking, with 2015 being the ninth straight year of revenue declines. Three Atlantic City casinos have closed, leaving eight land-based properties. Gaming spend and tax revenue are down 6.5 percent from the previous year. The 8 percent tax is dedicated to senior citizen and disabled programs and economic redevelopment. On Tuesday, New Jersey residents will vote on a statewide referendum on whether to permit two new casinos in Northern New Jersey, much closer to the New York City megamarket. Analysts say increases in Pennsylvania, Maryland and New York are what’s driving Atlantic City’s decline.

■ The Chicagoland market includes casinos in both Illinois and Indiana. Illinois’ 10 riverboats produced $1.44 billion in revenue and $488 million in taxes for education and local governments. Operations began in 1991. Indiana has 10 riverboats, two racetrack casinos and one land-based property that generated $2.22 billion and $608.1 million in taxes going to economic development and local government. Operations began in 1995.

■ Michigan has three land-based commercial casinos in Detroit that last year saw $1.38 billion in gaming revenue and $311.2 million in tax revenue. The 19 percent gaming tax — 10.9 percent to Detroit and 8.1 percent to the rest of the state — was initiated when the first casino opened in 1999. Tax revenue benefits public safety, capital improvements, growth programs, tax relief, neighborhood development and infrastructure repairs and improvements.