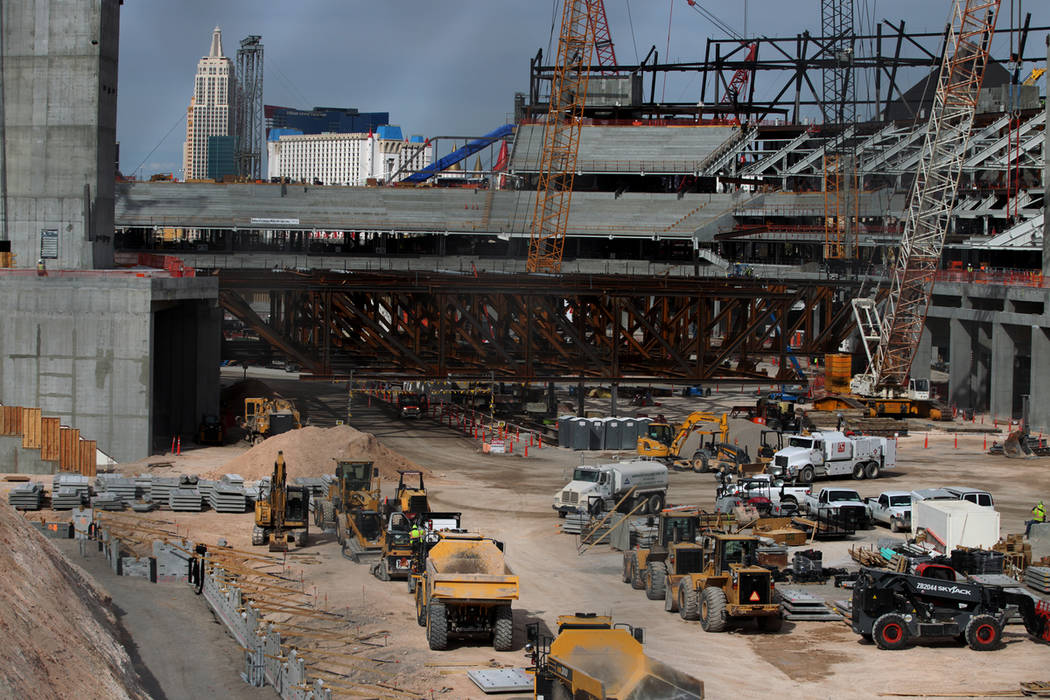 After Thursday’s Las Vegas Stadium Authority board meeting, I asked Chairman Steve Hill if he had received his tickets to the Raiders’ preseason game planned for Aug. 6, 2020.

Hill flashed a smile and chuckled, knowing I was joking about one of the puzzling turns of events that highlighted the meeting.

For some inexplicable reason, the Raiders’ hired construction manager, Jones Lang LaSalle of Chicago, reported to the board that the substantial completion date for the stadium of July 31, 2020, had been pushed back to Aug. 4, 2020, and somehow extrapolated that the stadium’s first preseason game would be two days later on a Thursday night.

When that report hit social media, it didn’t take long for the “Las Vegas Stadium project delayed” headlines to hit.

Even the always-reliable Jeremy Aguero of Applied Analysis got suckered in, reporting the new completion dates in his regular report.

The only problem: It wasn’t true, and it took a few minutes for Don Webb, chief operating officer of the Raiders stadium company, to clear the air.

Frankly, everybody’s first clue should have been that no one knows what dates NFL teams will be playing in 2019, much less in 2020.

Webb took it with good humor and then made it perfectly clear that the 65,000-seat indoor stadium that will figure prominently in Southern Nevada’s ability to draw sports and entertainment events — and put heads in beds — would be completed by July 31, 2020, as he originally said.

“Let me be unambiguous,” Webb told the board. “We will make that date. We will complete the construction on time.

All things considered, the Raiders’ relationship with the city and state has been a good one, and several reports Thursday enumerated some of the positives that already have emerged.

Critics who thought the high-priced season tickets and personal seat licenses wouldn’t sell in small-market Las Vegas have been proven wrong. Aguero said PSL sales continue “to be not only on track, but beating expectations relative to the PSL proceeds overall.”

Indeed, the authority transferred PSL proceeds to construction accounts as agreed upon in the state’s contracts with the Raiders, turning $25.5 million over to the team in January and $37.7 million in February.

Room tax receipts continue to track just as the authority’s financial experts had projected. After 22 months that included a downturn resulting from the Oct. 1, 2017, shooting, room tax proceeds are 0.6 percent ahead of projections at $93.9 million through January. The naysayers who said policymakers didn’t build a high enough tax rate into the equation were clearly wrong.

Possibly the biggest success story has been within the Community Benefits Plan, the requirement that made contractors Mortenson Construction and McCarthy Builders hire small businesses, women and minority subcontractors.

Small Business Enterprise-qualified companies accounted for 19 percent of the work hours (the published goal was 15 percent), and minority and women participation was 67 percent (the workforce goal was 38 percent) for 1.23 million work hours, a report said.

Also, 68 percent of all firms awarded work on the project are based in Nevada.

No one is naive enough to think the state’s journey with the Raiders wouldn’t hit a few speed bumps.

Many are still wondering just exactly how this satellite parking plan the team announced about eight months ago is going to work.

MGM Resorts International is still concerned about how their customers are going to get boxed out of their own parking garages on game days.

The Las Vegas Monorail extension to bring mass transit to the stadium seems stuck in reverse. And no one is looking forward to what Interstate 15 is going to look like near Tropicana Avenue on event days.

“Life is not linear,” Webb said. “There are always bumps in the road.”

The Raiders hit a few of those Thursday, but they weren’t enough cause a crash.