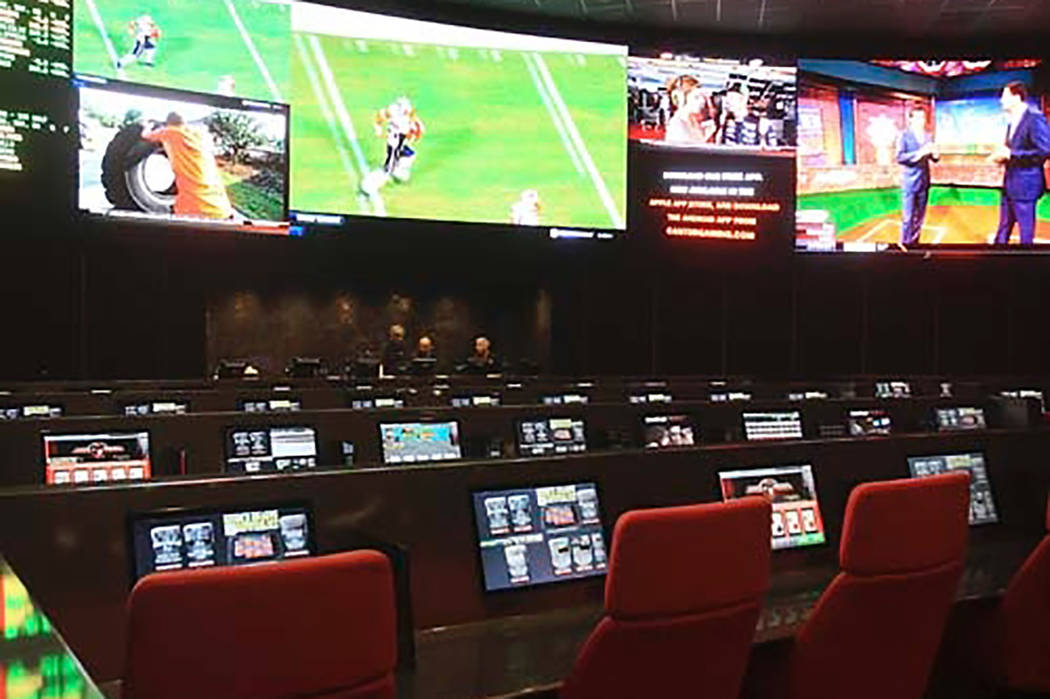 Race and Sports Book at the Palms. (Las Vegas Review-Journal)

The Nevada Gaming Commission last month did something it rarely does — reject a settlement agreement between the state Gaming Control Board and an industry licensee over a complaint against a company’s operation.

The settlement wasn’t rejected because the commission wanted to give the company, CG Technology, a break.

Some commissioners believe the company needs to have its license revoked, effectively running the operator of eight Southern Nevada sports books out of business.

“You have been called to the principal’s office three times. When does this kid not get to come back to school?” Commissioner Deborah Fuetsch asked of CG Technology CEO Parikshat Khanna, who was at the Aug. 23 hearing.

Fuetsch was referring to two previous appearances CG has had before the commission on disciplinary matters.

In January 2014, the company was fined an industry-record $5.5 million for allowing one of the company’s key executives to run an illegal sports wagering operation. In July 2016, CG Technology was ordered to pay a $1.5 million fine and establish an escrow account to pay bettors who received lower payments on their wagers than they were entitled to receive. That action also forced former president and CEO Lee Amaitis to leave the company.

In the most recent incident, CG was accused of illegally taking sports bets from out-of-state gamblers, taking bets and paying winners of events that already had occurred, making incorrect payments on 1,483 bets, and improperly configuring a satellite sports book to give the wrong odds for February’s Super Bowl.

CG attempted to mitigate the damage by self-reporting the incidents and agreeing to pay a $250,000 fine. The company also was ordered to get rid of its third-party software provider whose product apparently couldn’t prevent the illegal actions from occurring.

But commissioners would have none of it, unanimously rejecting the settlement in a vote.

CG was given 30 days to respond to its complaints upon receipt of the transcript of the meeting.

“For me, this isn’t a fine issue. It is a revocation issue,” said Commissioner John Moran, who was a member of the commission and heard the complaints against CG in 2014 and 2016. “I can’t think of a more egregious ongoing pattern of violations. If there was a hearing in the future, I would be leaning toward revocation, not a fine.’’

Commission Chairman Tony Alamo also was on the commission for those hearings. He noted that Nevada has a reputation to uphold with sports betting recently being legalized in Delaware, New Jersey, Mississippi and West Virginia, with more on the way.

But Alamo said, “I have zero appetite to move forward on this agreement.”

The timing also is important as the football season has begun and betting college and NFL games generally is the most lucrative time of year for the sports betting industry.

No doubt the M, Hard Rock, Tropicana, Cosmopolitan of Las Vegas, The Venetian, Palazzo, Palms and Silverton, which have sports books operated by CG, are keeping an eye on the regulatory outcome. They haven’t responded to requests for comment.

It’s unclear what would happen if regulators move to revoke the license since it’s never happened before, but cash reserves are in place to protect consumers.

CG continues to operate and will consider a new settlement. A spokesman for the company issued a statement that said: “the company remains a Nevada gaming licensee and continues to take bets on all of the major sports at our eight sportsbooks and through our CG Sports app.”

“CG Technology is in full compliance with the Nevada Gaming Control Board’s financial reserve requirements that safeguard all funds on deposit, all unpaid winning tickets, and all bets whose outcomes have yet to be determined.”