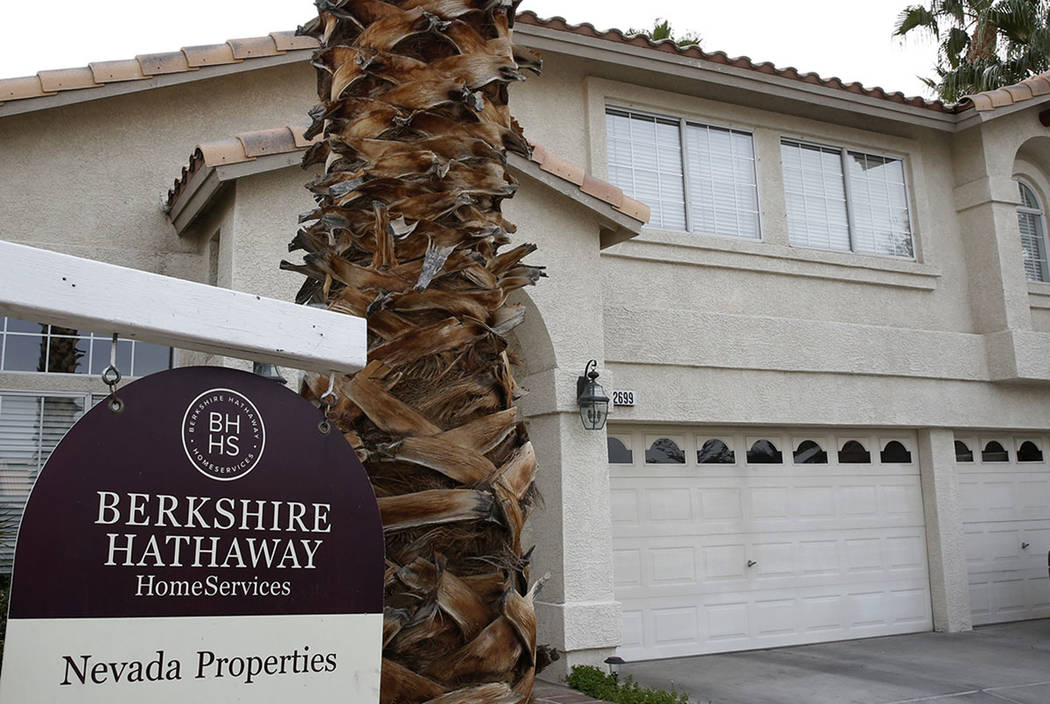 A for sale sign is displayed in front of a home at Fan Palm Court near Windmill Lane Wednesday, Nov. 15, 2017, in Las Vegas. Bizuayehu Tesfaye Las Vegas Review-Journal @bizutesfaye

Las Vegas home prices are rising at one of the fastest rates nationally, bolstered by strong demand and shrinking inventory.

So, you may wonder, are we closing in on the peak prices from the bubble years yet?

Not even close, as a new report shows.

The report, by Nationwide Mutual Insurance Co. economists, and using figures from housing tracker CoreLogic, said that Las Vegas-area house prices are 27.7 percent below their peak. That was highest among the metro areas listed.

CoreLogic’s national house price index hit a record high in September, but roughly a quarter of metro areas still were below previous peaks, including a few by more than 20 percent, Nationwide reported.

Many markets below prior highs are in the “sand states” of Nevada, California, Arizona and Florida, “where the housing bubble was most pronounced and the subsequent bust in prices was most severe,” the report said.

Despite several years of above-average price growth, the authors added, “home values have yet to recover completely from the housing market crash.”

Las Vegas was a poster child for the real-estate-on-steroids craze of the mid-2000s, with soaring prices, booming construction and widespread flipping. It also was ground zero for the crash that followed, with rampant foreclosures, plunging property values and abandoned, partially built projects.

Eventually, home prices started to rise again. With investors buying cheap houses in bulk to turn into rentals, prices were climbing so rapidly by 2013 — more than 30 percent year-over-year — that some locals feared another bubble was inflating.

The growth rate has cooled substantially, but Las Vegas is still near the front of the pack.

One aspect of Southern Nevada’s market has indeed reached record highs: new-home prices. Homebuilders’ sales totals remain a fraction of their peaks, but they sold homes for a record median of $356,400 in October, Home Builders Research reported.

But resales, especially single-family houses, dominate the valley’s market, and those prices are a ways off from setting new records.

The median sales price of previously owned single-family homes last month was $261,150, according to the Greater Las Vegas Association of Realtors. That’s more than doubled since hitting bottom in early 2012 but still below the peak of $315,000 in mid-2006 — more than 11 years ago.

Another big apartment complex is in the works for Las Vegas Boulevard’s lonely stretch of desert near the M Resort.

Clark County commissioners on Dec. 6 approved plans for a 575-unit apartment project off the southwest corner of Las Vegas Boulevard and Neal Avenue, several miles south of the Strip.

Records indicate the developer is Dallas-based Transcontinental Realty Investors. A representative did not respond to an email seeking comment this week.

The complex would be just south of The Arch, a planned 30-acre, 754-unit project at Las Vegas Boulevard and Chartan Avenue, by investor group WTI Inc. of Cupertino, California.

County commissioners approved plans for The Arch in June.