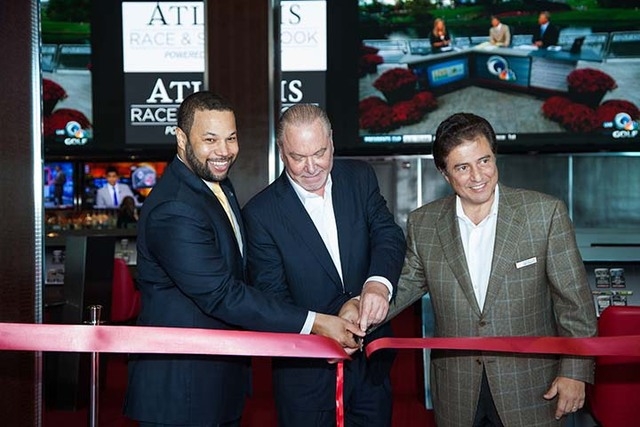 No allegations of illegal activity have been made against Amaitis, and the New York-based financial services firm was quick to deny the report.

“We feel compelled to address this irresponsible and baseless rumor,” Cantor Fitzgerald said in a statement. “The notion that Lee Amaitis is a target of federal prosecutors or that he participated in illegal bookmaking is baseless and false.”

The Atlantis sports book is Cantor Gaming’s first outside of Nevada.

Colbert, 33, entered his guilty plea to a single felony charge of conspiracy Sept. 21 in federal court in New York. He is scheduled to be sentenced Dec. 9, according to court documents.

He was arrested in October 2011 and indicted along with 24 others by the Queens County district attorney for his role in an illegal sports betting ring. He faced eight counts of conspiracy, corruption and money laundering.

Colbert, who arranged to transfer $100,000 in gambling proceeds between Las Vegas and New York, pleaded not guilty to the Queens charges. Last month, the Queens case was dismissed and the case referred to the U.S. Attorney’s office.

Founded in 1945, Cantor Fitzgerald has moved beyond its core financial services business to include commercial real estate and gambling. The firm, which is lead by Howard Lutnick, its chairman and CEO, has also branched out into investment banking.

Amaitis, who was running the firm’s international business from London, helped rebuild the firm following the Sept. 11, 2001 attacks. Cantor Fitzgerald lost hundreds of employees died in the collapse of the north tower of the World Trade Center.