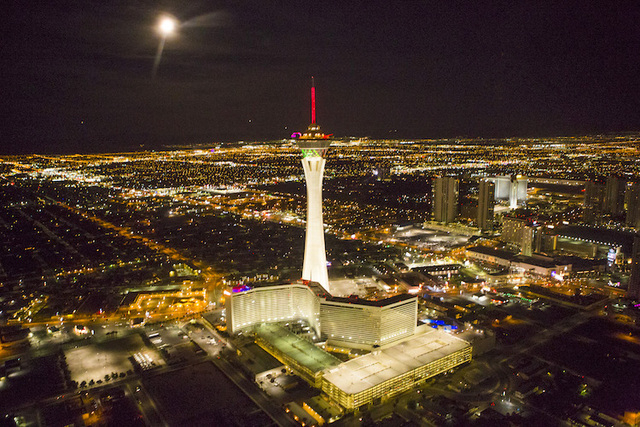 The Stratosphere Hotel & Casino, the brainchild of the late Bob Stupak, is about to celebrate its 20th anniversary.

As the hotel, casino and tower gears up for the official bash on May 1, here are 20 things you may not know about the Stratosphere:

Bob Stupak had bigger — and taller — plans for the Stratosphere

The Stratosphere is much shorter than Bob Stupak’s initial vision. The original plans for the Stratosphere called for its structure to be just over 1,800 feet — which would be more than 650 feet higher than it actually turned out.

In addition to wanting a taller structure, Stupak dreamed bigger when creating the Stratosphere. He wanted a 70-foot tall animatronic ape to climb a leg of the tower, according to a representative from the Stratosphere.

Since opening SkyJump in April 2010, 230,000 brave souls have taken the plunge from the Stratosphere’s 108th floor.

With guests leaping 829 feet above the Las Vegas Strip, the SkyJump holds the Guinness Book of World Records for the “highest commercial decelerator descent,” the resort noted.

According to the Stratosphere, the elevator bank that services the Stratospheres’ indoor and outdoor observation decks are the fastest double-decker elevators in the United States.

The Stratosphere has really long legs

At 921 feet above the Strip, the Stratosphere has received accolades for its height. Not only is the tower recognized as being the highest observation point in Las Vegas, but it’s also the tallest observation tower in the entire country.

Boasting the highest observation point in #Vegas counts for something right? Text VOTE STRATOS to 81500 and vote for our view as the @bestoflasvegas. #Beautiful #BOLV

It has not one, but two rooftop pools

Located on the roof of the Stratosphere Hotel — 25 floors above the ground — you’ll find the adults-only, European-style Radius Pool and Wet Lounge.

Debuting this week, the Stratosphere will open its new Elation Pool on the rooftop of the hotel’s eighth floor. The family-friendly pool will host daily volleyball competitions with the winning team receiving a free round of Jell-O shots, the resort said.

Along with being the only rotating restaurant in Las Vegas, the Stratosphere’s Top of the World restaurant has received the Wine Spectator Award of Excellence consecutively since 1996.

The restaurant, which is located more than 800 feet in the air, offers diners unparalleled views of Las Vegas as it revolves 360 degrees every 80 minutes.

Most of the Strip and its surrounding areas are part of Clark County, not the City of Las Vegas.

If you want a “true” Las Vegas experience, the Stratosphere — sitting right at the border of Sahara Avenue on the way to downtown Las Vegas — is your best bet.

People race up the Stratosphere in the name of charity

For the past eight years, the Stratosphere has partnered with the American Lung Association to hold a “Scale the Strat Fight for Air Club” charity event.

The annual event, which has become one of ALA’s most profitable fundraising campaigns, challenges participants to conquer 1,455 steps as they race up the Stratosphere Tower’s 108 flights, organizers said.

Since “Scale the Strat” first started in 2009, over 4,000 people have sprinted up the Stratosphere’s steps to help the American Lung Association raise over $1,240,000.

With its location on the 107th floor of the Stratosphere, 107 Skylounge offers guests a chance to “drink in the view” as they look down on the glittering lights of Sin City.

The lounge touts itself as having the “dirtiest martini” in town, which is likely why it’s been previously named as having Las Vegas’ best martini.

It has something for everyone

If gaming or thrill rides aren’t your cup of tea, the Stratosphere has several other entertainment options at your disposal.

You’d rather watch a burlesque pin-up calendar come to life? The Stratosphere’s “Pin Up” show, which stars Claire Sinclair, is inspired by pin-up calendars from the 1940s and ’60s.

Employees at the Stratosphere stick around for a while

It takes an army to keep the Stratosphere’s 2,427 rooms well-kept, its 75,000 square feet of retail space fully stocked, the six restaurants flowing and it’s 80,000 square feet of casino floor — which is home to 750 slot machines and 45 table games — thriving.

In order to do so, the property has a staff of 1,600 employees, 200 of which started working at the Stratosphere when it first opened 20 years ago, Ned Martin, chief operating officer of American Casino & Entertainment Properties told the Review-Journal.

For nearly 10 years, the Stratosphere was home to a rollercoaster — appropriately named the “High Roller.”

Although the coaster, which opened with the property in 1996, had the thrill of being 909 feet above the Strip, the ride faced problems and was ultimately shut down in December 2005 to make way for newer attractions like Insanity and X Scream

The coaster may have been removed from the Stratosphere, but it can still be found in Las Vegas. Part of the roller coaster is at its final resting place, the quirky house-turned-museum belonging to former Lt. Gov. Lonnie Hammargren.

#TBT Who remembers when we had the roller coaster on top of our Tower? It was actually called the "High Roller." #Vegas

The Stratosphere attracts a lot of visitors

Although many of its visitors travel to town from California, the resort also sees quite a bit of foreign travelers, too.

According to Martin, most of the Stratosphere’s international visitors come from Canada and Germany. However, travelers from Great Britain are a close third.

At the beginning of March, the Stratosphere had a leading role in the upcoming “Sharknado 4” film.

See Sharknado 4 being filmed. ✔ (This was not on the list but the poor acting was very entertaining!) #sharknado4

For the love of food

You can have a wedding ceremony in the clouds

Along with offering special thrill ride weddings, the Stratosphere’s actual wedding chapel is appropriately named the “chapel in the clouds.”

The resort has two sky-high chapels located on its 103rd floor and prides itself on being the only venue in Las Vegas that’s located 1,149 feet above the Las Vegas Valley.

Another happy couple married atop our Tower! You did know that we do weddings here too, right? For more info, go to ChapelInTheClouds.com #VegasWedding #Beautiful

The Stratosphere is leading a movement to “take Vegas back”

According to the casino, “the movement works to reclaim Vegas from the pricey and pretentious by offering real people good times and great values,” a representative of the Stratosphere said in an email.

For visitors, seeing the Stratosphere tower is a good indication that they’ve officially arrived in Las Vegas.

The same holds true for locals, as it’s a nice sight to see after a long trip and really feel like you’re “home.”

In addition, since the tall structure can be seen from almost anywhere in Las Vegas, it’s a useful landmark to give directions.

"We are shaped by our thoughts; we become what we think. When the mind is pure, joy follows like a shadow that never leaves." -Buddha #LasVegas #Vegas #shadow #view

The Stratosphere wasn’t the first casino on the property

Prior to opening the Stratosphere in 1996, visionary Bob Stupak had owned and operated Vegas World Casino, which was located on land that would later be used for the ‘Strat.

Roxy’s Diner gives customers a dinner and a show

A trip to Roxy’s Diner inside the Stratosphere isn’t just an eat and be on your way type of experience.

Instead, the servers at Roxy’s treat guests to a show while they dine, as the servers sing in addition to serving.