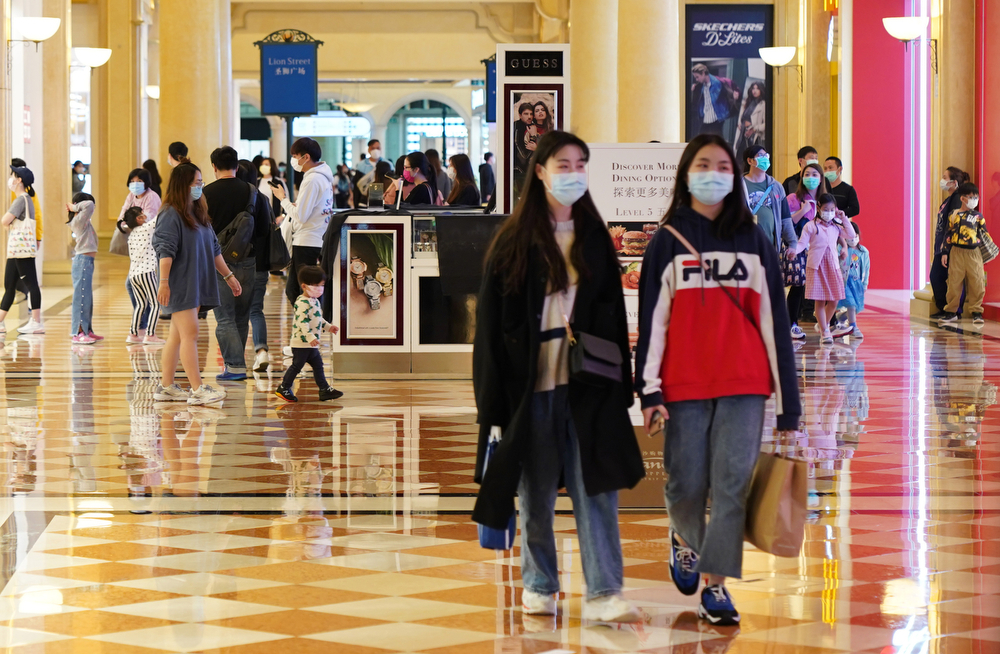 Betting on the future 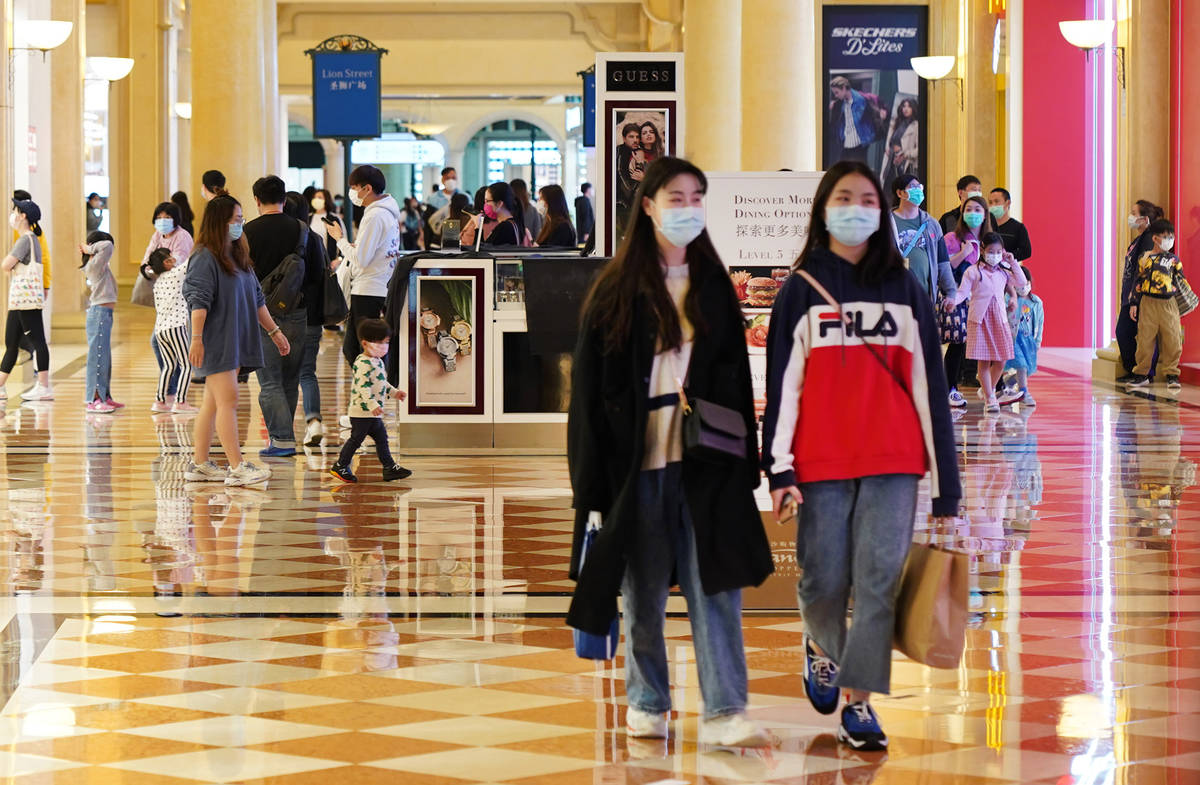 Shoppers wearing masks stroll through the Shoppes at Venetian on April 10, 2020 in Macao. (Inside Asian Gaming) 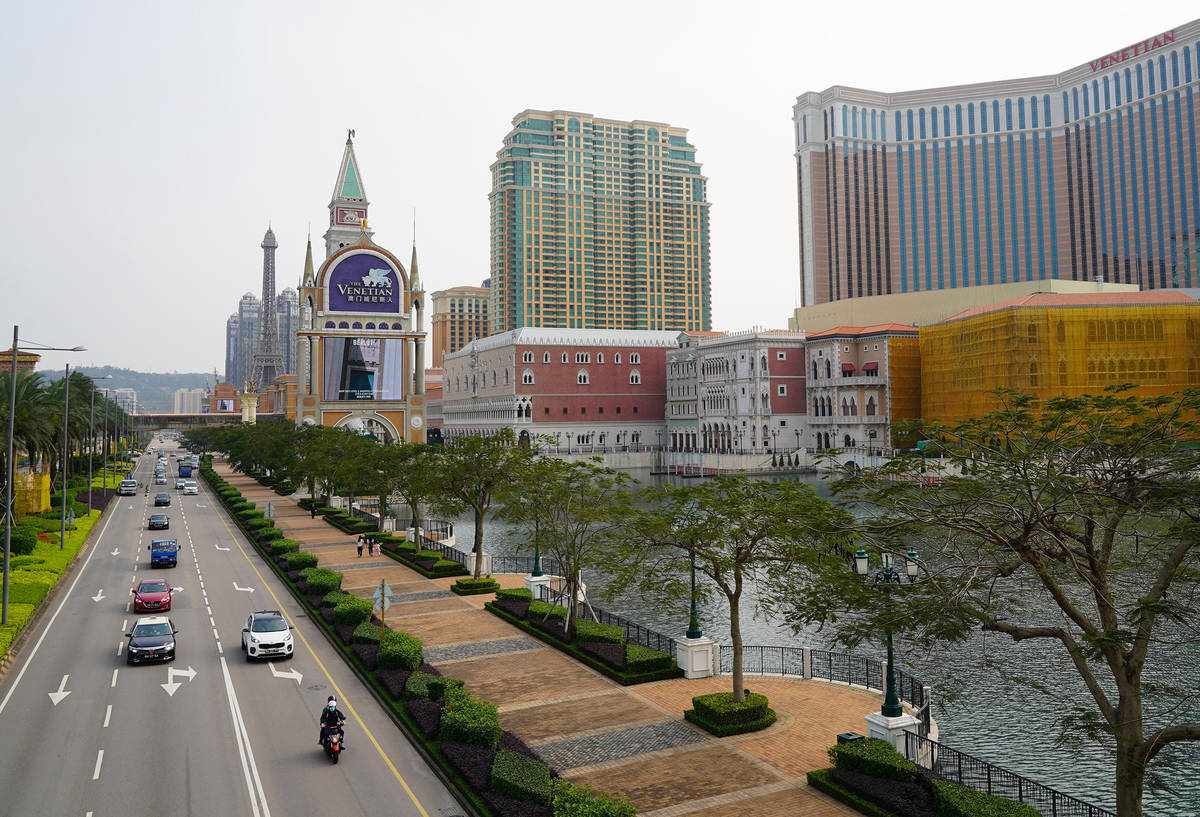 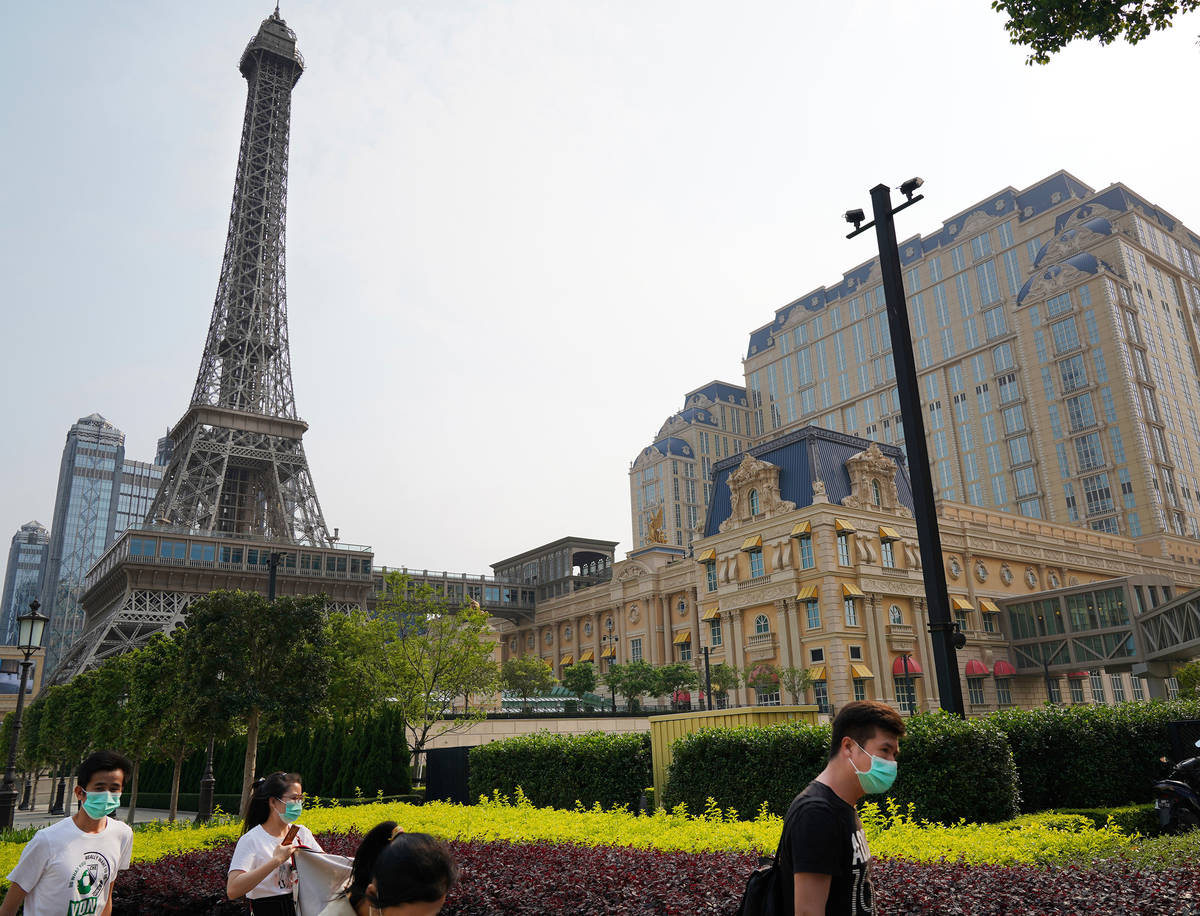 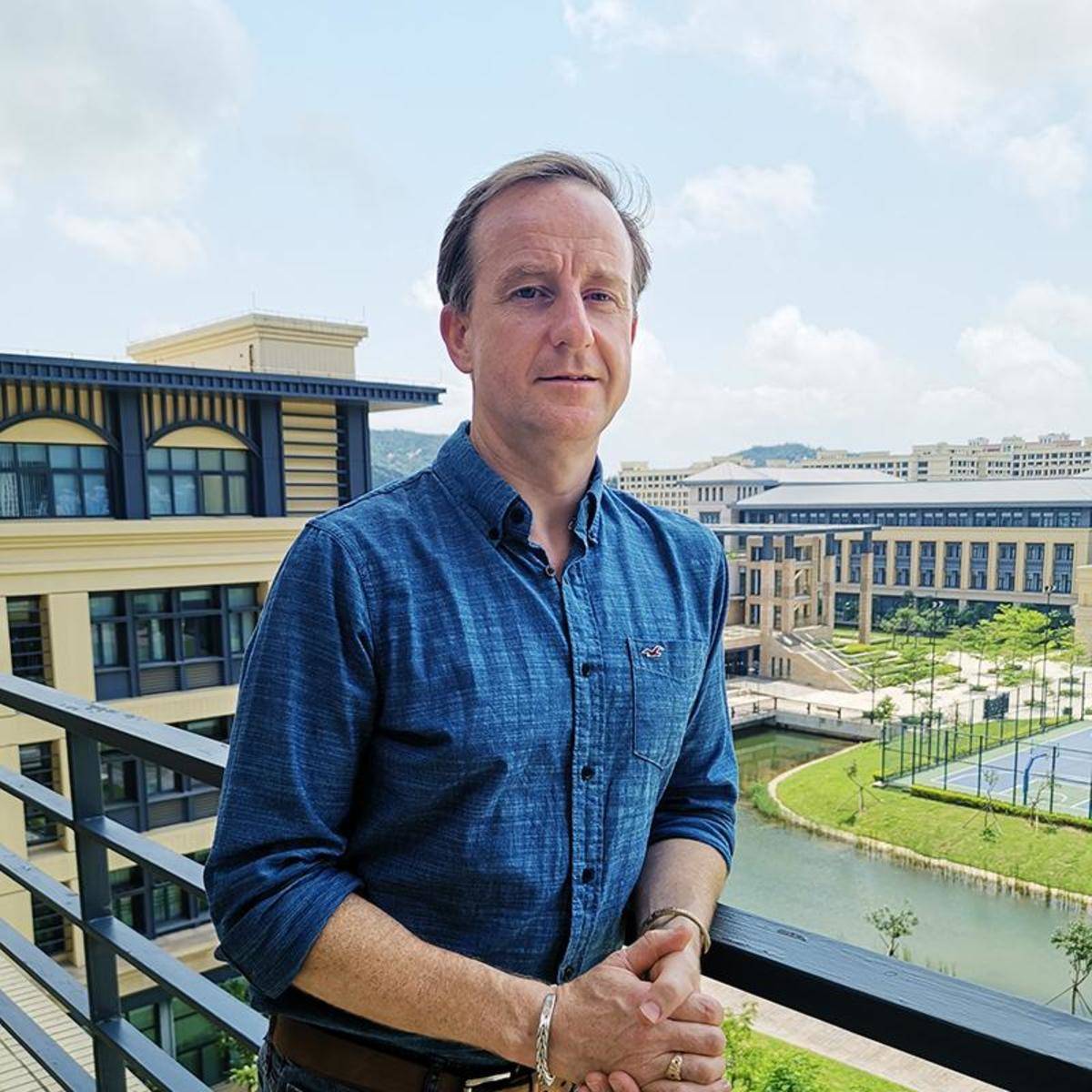 Glenn McCartney is associate professor in international integrated resort management at the University of Macau.

Far from home is what home may soon look like.

Macao and Las Vegas — two cities separated by an ocean, united by an industry.

They rank as the first- and second-largest gambling markets in the world, respectively, their combined revenues totaling over $40 billion in 2019, a number destined to plummet in 2020 because of tourism-decimating coronavirus fallout.

While local casinos will remain dark at least through April 30, some of their Macao counterparts opened their doors at midnight Feb. 20 after a 15-day shutdown, providing a glimpse of what the future may hold for Las Vegas.

It won’t be an overnight bounce-back, if Macao is any indication.

When its casinos reopened, they didn’t look or sound the same as before. Capacity was limited, lowering the foot traffic and volume on casino floors.

To gain entry, visitors were required to undergo a temperature check, submit a health declaration from a cellphone app and don a face mask — which casino employees also were required to wear.

Once inside, players found half of all slot machines and table games sitting idle to maintain social distancing protocols. At some properties, a maximum of three players were allowed at baccarat tables that normally seat seven and are crowded by onlookers making bets of their own.

Workers were tasked with wiping down each poker chip after it was handled by a player.

Time will tell what it will look, feel and sound like when the casinos reopen in Las Vegas, but Macao’s experience may hint at what is to come and how a recovery could slowly unfold here. Though the two markets are very different, there are lessons to be learned as Vegas looks to return to the 24/7, glimmering disco ball of a city that it was.

“Sure, it’s not the size that it was before,” he adds. “But you can see, the wheels are starting to turn.”

A recent public opinion poll from Harris Insight and Analytics details the impact the coronavirus could have on the resumption of various leisure activities once the COVID-19 curve has flattened.

According to the poll, it could take two to three months for Americans to attend large social gatherings, with only about a fifth of respondents saying they would host/attend a larger social gathering (22 percent), go to the movies (21 percent), stay in a hotel (20 percent), or go to a sporting event (17 percent).

While the poll did not ask specifically about gambling, these are ominous numbers for a city such as Las Vegas, which relies much more heavily on tourism and visitation than does Macao.

In Macao, gaming accounts for the vast majority of revenues, there are fewer entertainment options and dining is often comp-based as a means of driving repeat business.

“We are really gaming dependent here — it’s 90 percent of our revenue in terms of the integrated resorts,” McCartney says. “We have a heavy repeat audience here, coming multiple times a year. People say we have non-gaming, but a lot of that is a support mechanism to bringing in the high-end gaming.”

In contrast, gaming makes up 35 percent of revenue on the Las Vegas Strip while food and beverage combine for 24 percent, according to UNLV’s Center for Gaming Research.

Additionally, Las Vegas is an international city with visitors coming from all over the world, whereas Macao is a much smaller, more insular market heavily dependent on traffic from China.

“We don’t have people flying in from all over,” McCartney says. “We wouldn’t have that type of challenge that you guys would have in a recovery mode.”

To drum up business in Macao, the government incentivized residents to visit casinos.

“They gave pre-loaded cash cards to the locals for $375 each, and they could use those cards anywhere on Macao,” says Jim Dobson, a veteran journalist and travel writer who has covered Macao extensively, most recently for Forbes magazine. “It actually got the people in there. It definitely worked.”

Of course, none of this has been nearly enough to offset the enormous revenue losses for Macao’s 41 casinos.

Figures released this month by Macao’s Gaming Inspection and Coordination Bureau show not to expect a quick rebound.

The worst month was February, during the casino shutdown. In that month — normally robust with visitors during Chinese New Year festivities — revenue plummeted 87.8 percent to $387.1 million.

Gaming revenue in March decreased 79.7 percent to $655.5 million from March 2019. It was the sixth straight month of declines for Macao, which also was impacted by unrest in nearby Hong Kong in the fourth quarter of 2019.

“It is important to keep in mind that although the Macao casinos have reopened, for all intents and purposes they probably just should have stayed shut,” says Grant Govertsen, a gaming analyst and co-founder of Union Gaming who has experience working in Macao. “Macao is on total lockdown and customers aren’t able to get to the city.”

Three Las Vegas-based companies operate nine casinos in Macao, generating between about 30 percent and 60 percent of their companies’ total revenue there.

Wynn Resorts, which includes Far East properties Wynn Macau, Encore Macau and Wynn Palace, filed a Securities and Exchange Commission document in early April that outlined the impact COVID-19 is having on the company.

“During the closure period, we incurred approximately $2.5 million per day of cash operating expenses, excluding cash interest expense of approximately $500,000 per day,” the filing said. “Until such measures are lifted, we expect to continue to incur such cash costs in excess of the amounts we are earning at our properties.”

Other Las Vegas-based companies that own casinos in Macao — Las Vegas Sands Corp. and MGM Resorts International — are expected to report similar adverse effects when they deliver first-quarter earnings reports in the next three weeks.

Unlike Macao or other markets, Vegas’ rebound could come down to pro football.

“Where Las Vegas might differ is where it always has: in coming up with innovative ways to bring the customer back, creating ‘new rides in the amusement park’ that is the integrated casino resort,” says Bo Bernhard, executive director of the International Gaming Institute at UNLV.

“The city’s hope, of course, is that it has a ready-made ‘new ride’ in the form of sports entertainment,” he continues, alluding to teams such as the Vegas Golden Knights and the Las Vegas Raiders, who will debut at Allegiant Stadium this summer, “and its integration with all that is available on that boulevard.”

Adding an NFL franchise and stadium just might provide the boost a recovering local economy needs.

A 2016 report by the Southern Nevada Tourism Infrastructure Committee predicted that the stadium could catalyze over $600 million in annual economic impact and bring in an additional 450,000 visitors to the city. Authors of the report say the estimates are still good and are used today by the Las Vegas Stadium Authority.

Of course, the NFL season also could be derailed by the coronavirus — perhaps games might have to be played in empty stadiums — mitigating the financial benefits.

But for now, the season is set to proceed as usual come September.

In the meantime, casinos probably will engage in a slow ramp-up when resuming business.

Interim MGM Resorts CEO Bill Hornbuckle indicated that the company would be as careful reopening Nevada’s casinos as it was in closing them.

In an interview with CNBC, Hornbuckle said he’s not expecting corporate America to return to Las Vegas until at least the third quarter of 2020.

“We’re going to take this literally one day, one week and one month at a time,” Hornbuckle said. “We’ll open intelligently and hopefully with some forethought.”

Las Vegas Sands, days away from releasing its first-quarter earnings results, said it would probably discuss any operational changes during the earnings conference call Wednesday. MGM Resorts has scheduled its earnings call for April 30, currently the last day of the state-ordered closure of non-essential businesses in Nevada. Wynn Resorts has yet to set a date for its call.

A spokesman for Caesars Entertainment Corp. said reopening and operating procedures would be dictated by orders and recommendations of government and health officials.

“Beyond that, there’s nothing we can add at this point, although we don’t anticipate an immediate return to normal business conditions,” Caesars spokesman Rich Broome said.

When casinos do turn the lights back on, expect to see some of the same safety precautions adopted in Macao. Wynn Resorts, for example, has announced it plans to screen the temperatures of guests at all resort entrances, just as most casinos in Macao do now.

“I think that the entire consumer economy will implement sound measures, and Las Vegas will be no different,” Bernhard says. “In Asia, temperature checks are a normal part of everyday life post-SARS, and the public here will grow comfortable with that as well.”

Steve Hill, president and CEO of the Las Vegas Convention and Visitors Authority, said he expects Southern Nevada’s resorts to emphasize cleanliness, public health and safety when they eventually invite guests back.

“That sense of we’re taking care of you, and that includes your health, is going to be an important part of how the destination operates,” he said.

Hill said some guests may be put off by the additional attention, much like travelers who fly and must be screened by the Transportation Security Administration.

“I think the steps that will be taken at properties will make customers feel better as a result of taking them,” he said.

Alan Feldman, distinguished fellow at UNLV’s International Gaming Institute, says there is no way a company like MGM Resorts, which operates nine properties on the Strip, would open them all at once.

“They’d end up losing more money opening than if they keep them closed,” he said. “And even then, within one of those buildings, I would not expect everything to open.”

If the gaming ban is lifted, showrooms and arenas could remain closed, he said. Fast-service restaurants might open before buffets and gourmet eateries to accommodate guests and staff.

And even if patrons are allowed to gamble, casino floors may remove slot machines to better accommodate social distancing and hold off on allowing traditional table games until they get a chance to test the waters.

None of that will happen without adequate personal protective equipment and cleaning supplies on hand for staff and guests, Feldman said.

“With people handling cards and chips, that all needs to be thought through pretty carefully — both so that there are health and safety measures in place, and so that the public believes that they are in place,” he said. “If anything happens that endangers the health and safety of their employees and customers, their businesses are literally on the line.”