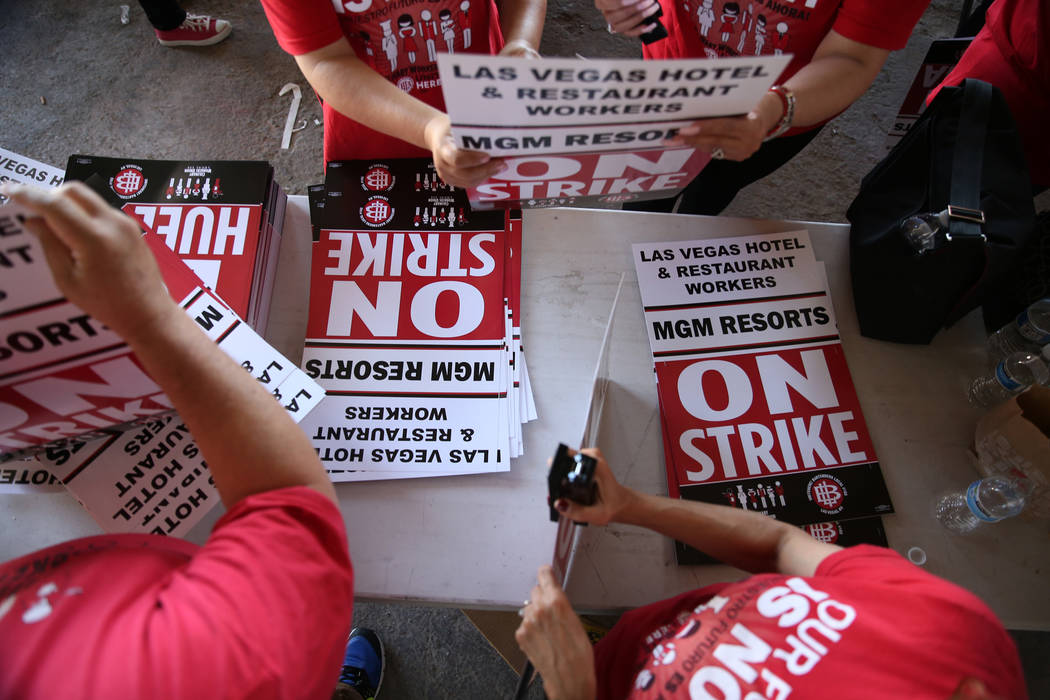 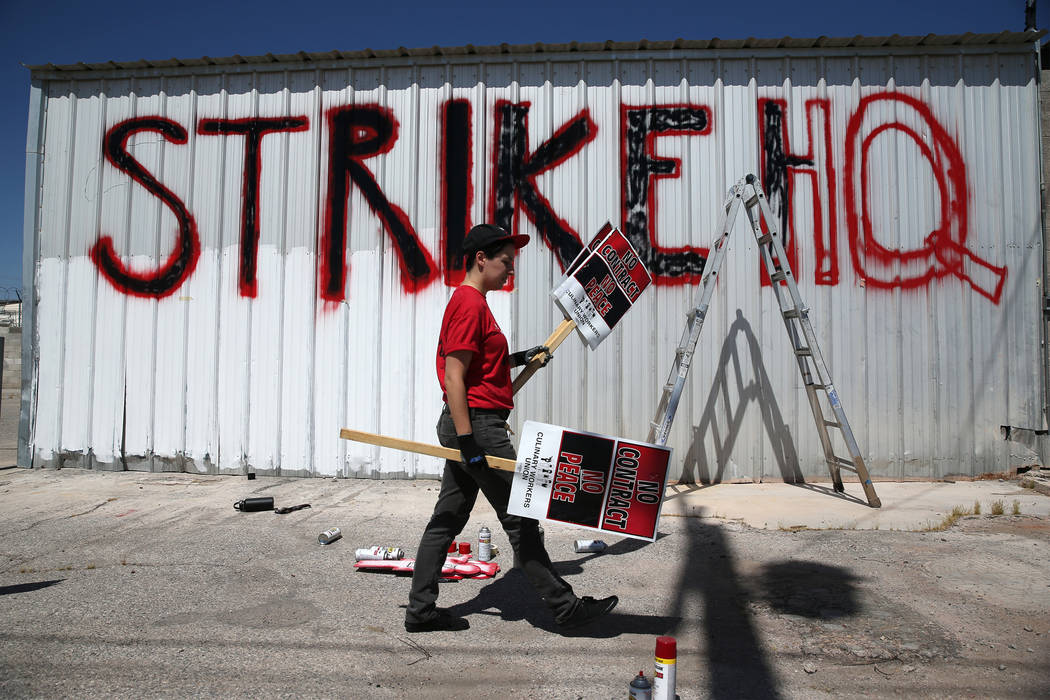 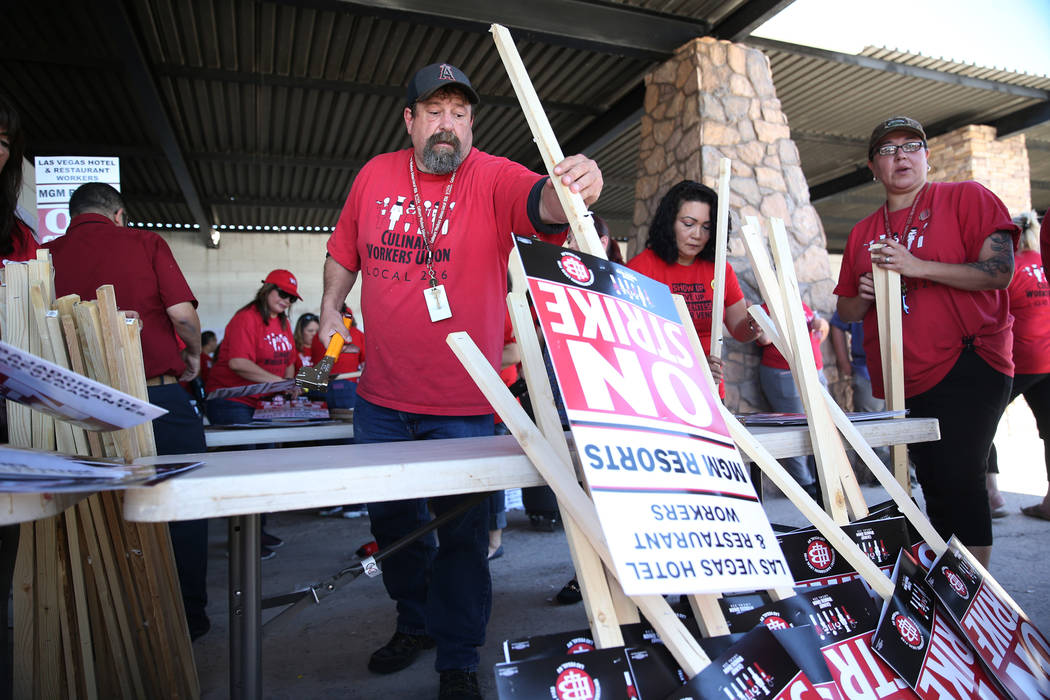 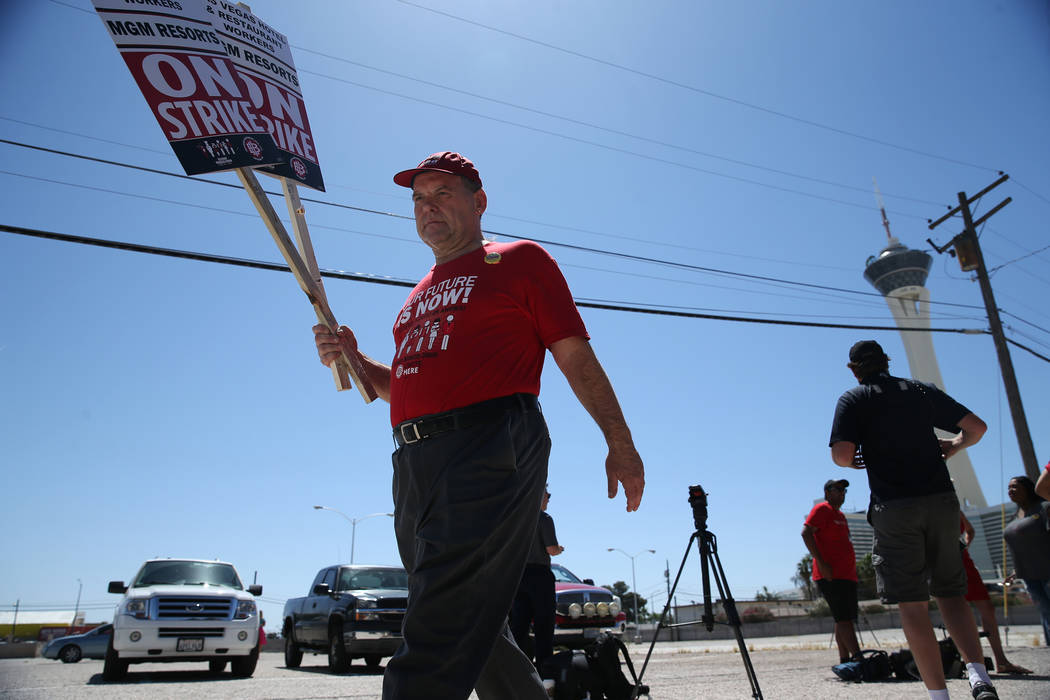 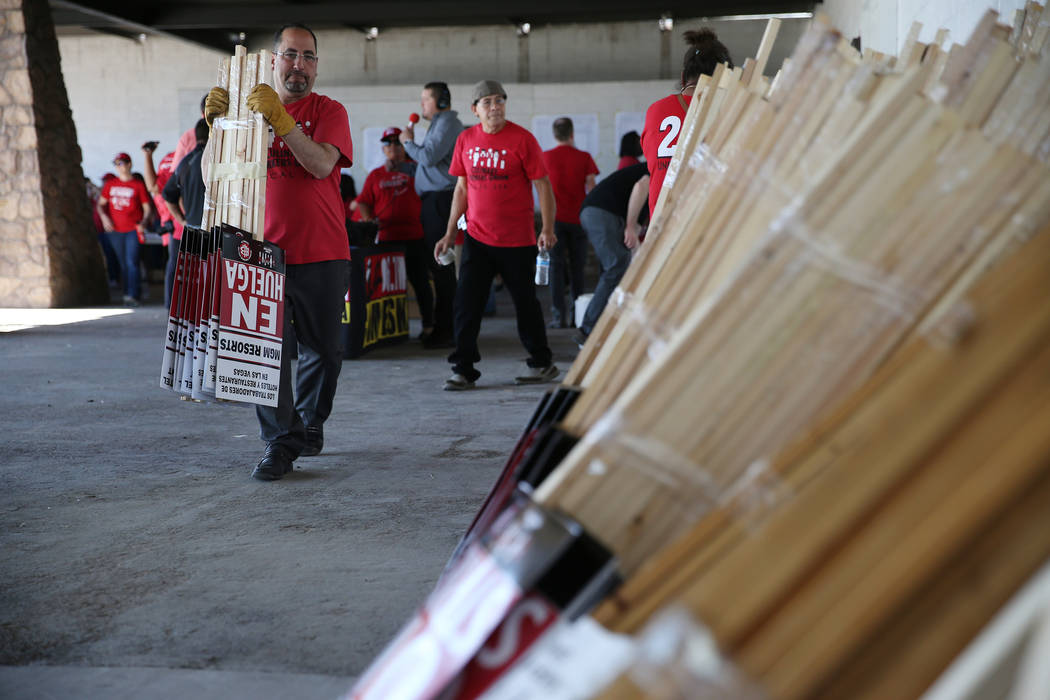 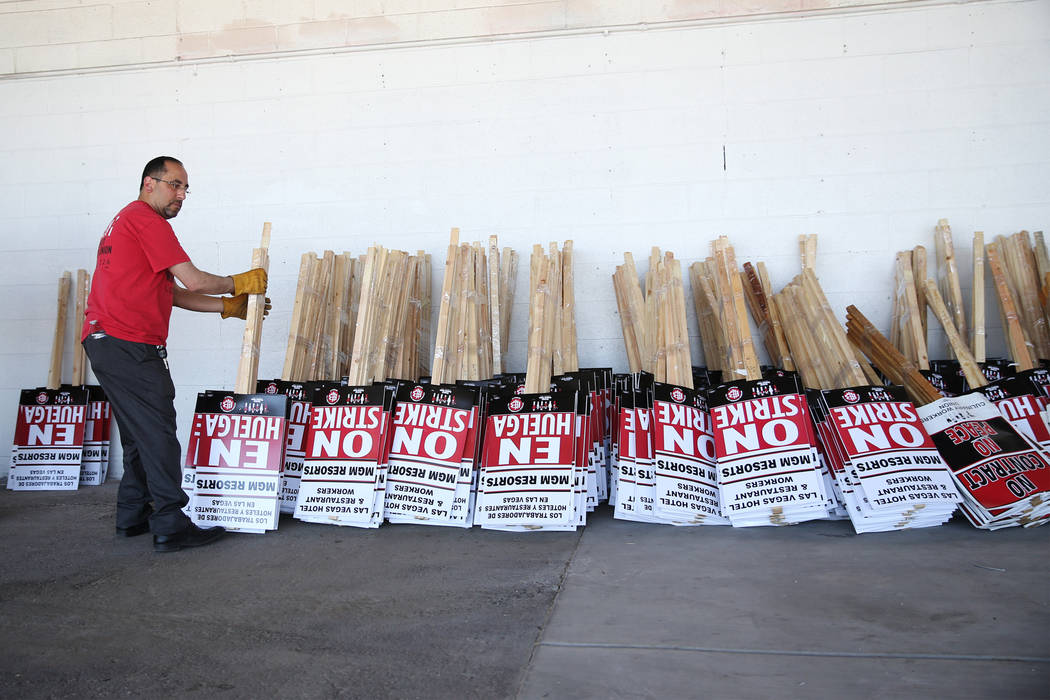 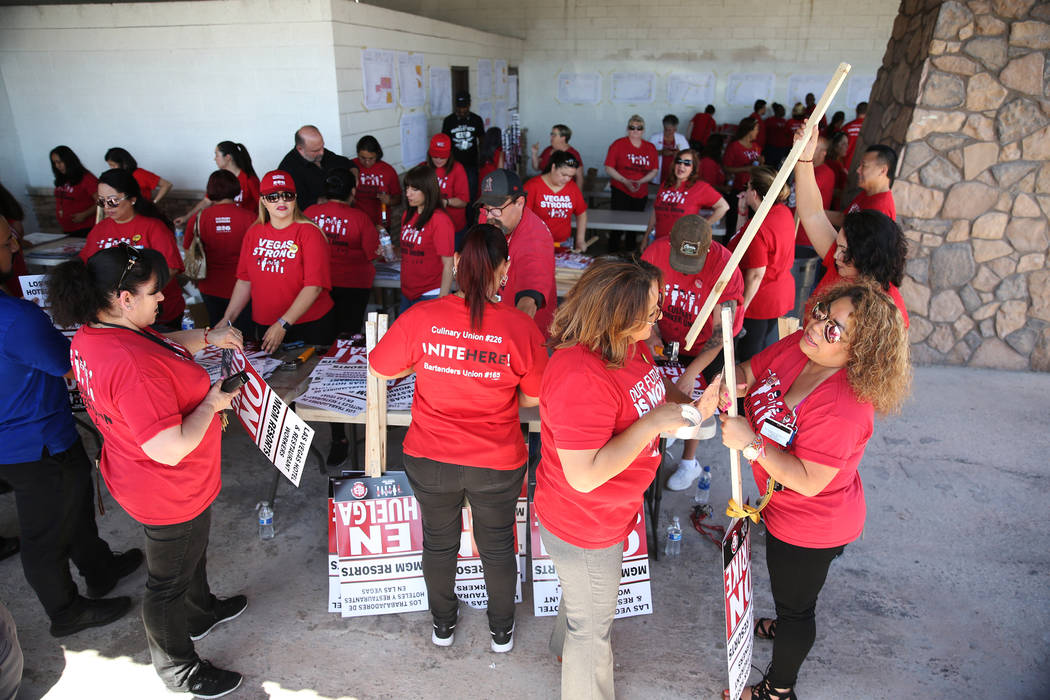 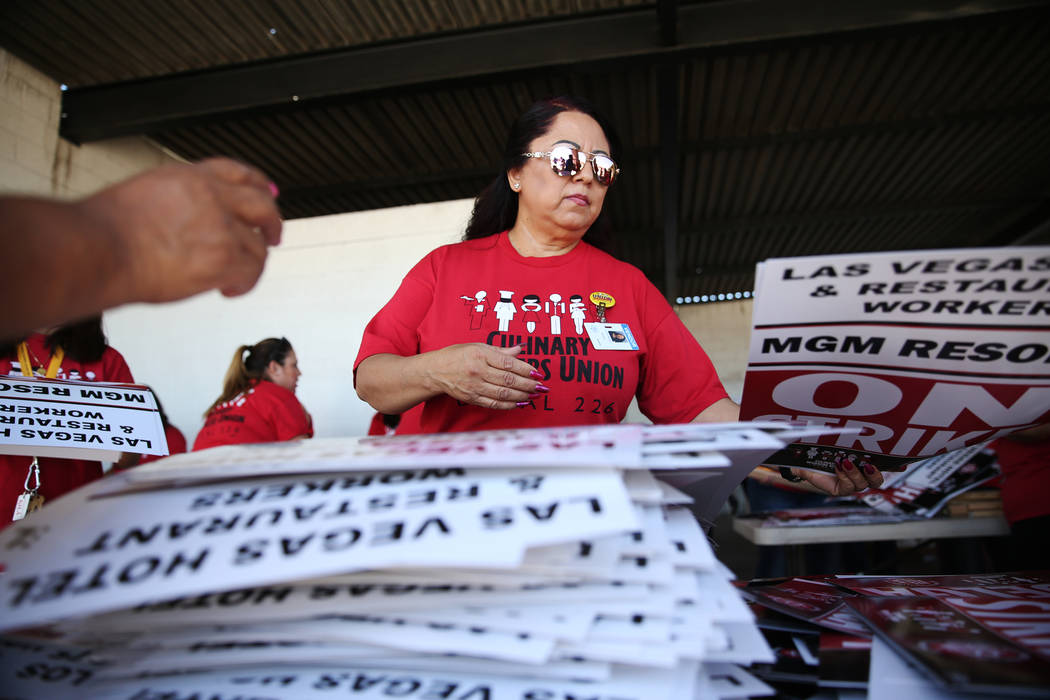 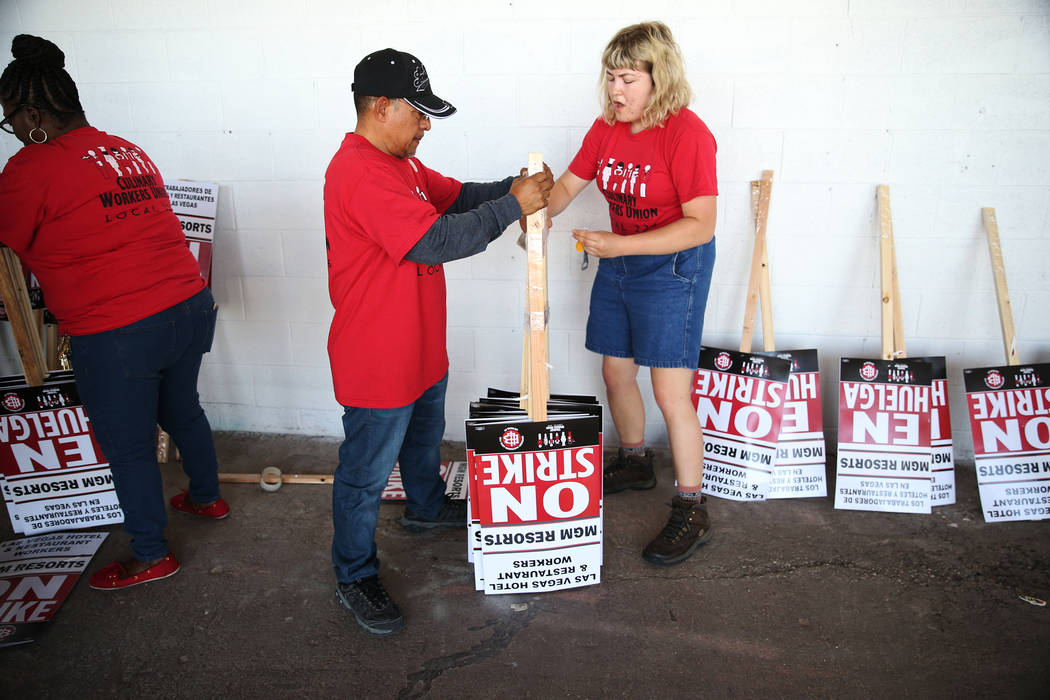 The threat of a crippling strike in the city’s resort corridor might be averted.

With a tentative five-year labor agreement established by Culinary Local 226 and Bartenders Local 165 with Caesars Entertainment Corp., the focus of labor negotiations now shifts to the other big Strip player: MGM Resorts International.

A union representative said negotiations with MGM would resume Saturday.

Still, more than 100 union members, most of them clad in red T-shirts, rallied at their “Strike HQ” Friday to make hundreds of picket signs declaring a walkout of MGM properties.

Maps showing where pickets would be stationed outside MGM properties were taped to the walls at the work area, while laborers rehearsed union slogans.

MGM officials issued a statement late Friday but gave no indication when they expected the talks to resume or a settlement to be reached.

“We’ve made good progress in resolving the remaining issues, and we are scheduling more negotiations to allow these productive talks to continue,” an MGM spokeswoman said in an email.

“We remain dedicated to negotiating a contract that demonstrates our commitment to employees and their families while our company continues creating good jobs and future opportunities in Las Vegas. We remain confident that we will reach an agreement.”

Caesars, the second-largest Strip employer by number of workers, reached a deal early Friday. Union members would have to ratify the contract in an as-yet-unscheduled vote.

“We are pleased to announce that a tentative agreement has been reached with @CaesarsEnt,” Culinary communications director Bethany Khan tweeted at about 3:30 a.m. Friday. “The historic new five-year deal covers approximately 12,000 workers at nine casino resorts on the Las Vegas Strip.”

Caesars and MGM represent about half the 50,000 workers whose contracts expired at midnight Thursday.

Penn National Gaming, Golden Entertainment and Boyd Gaming are among the other companies with properties awaiting new contracts. Several Station Casinos properties have voted for union representation, but have yet to draft initial contracts.

Among the largest properties where contracts have expired that are not a part of larger casino groups are the SLS Las Vegas, Treasure Island and the Westgate as well as downtown’s Golden Nugget, Plaza, Four Queens, Golden Gate, D, Downtown Grand and El Cortez.

Details of the settlement have yet to be announced. Caesars and the unions were expected to issue a joint statement Friday afternoon, but that was delayed.

“We feel the company will continue to be successful, and the union members will continue to have the American dream,” she said as her colleagues built picket signs. “We’re going to have a ratification vote for the members in their committees, and the members will know all the details of the contract. In respect to them, we’ll wait until after ratification to give the details.”

Union officials met with Caesars’ management team Thursday and early Friday and indicated meetings with MGM would be next. Negotiators have been in contract talks since February.

About 99 percent of 25,000 workers voted May 22 to authorize a strike after contracts expired. Union leaders have the authority to order a walkout at any time.

Many labor and industry observers viewed the vote and union strike preparations as a means of applying pressure on resort management to complete contract talks.

Caesars and MGM operate 18 of the 34 resorts that would be impacted if bartenders, guest room attendants, cocktail servers, food servers, porters, bellman, cooks and kitchen workers who are employed at the casino resorts on the Strip and downtown Las Vegas were to walk off the job.

The casino operators have repeatedly said over the past two weeks that they expect to reach an agreement with the unions and avoid a strike that could leave guests struggling to get clean sheets and order food and drinks.

The unions have been seeking an average annual increase of 4 percent over the next five years in workers’ wages and benefits. That equates to an increase of roughly $1 an hour for union employees.

MGM and Caesars were offering an average annual increase of about 2.7 percent, according to the unions. Consumer price inflation is forecast to grow at an annual average rate of 2 percent in the coming years.

The unions also have sought additional safety measures for workers who occasionally come in contact with resort customers in hotel rooms. Strengthening sexual harassment policies regarding contact with customers also has been an issue.

BREAKING We are pleased to announce that a tentative agreement has been reached with @CaesarsEnt.