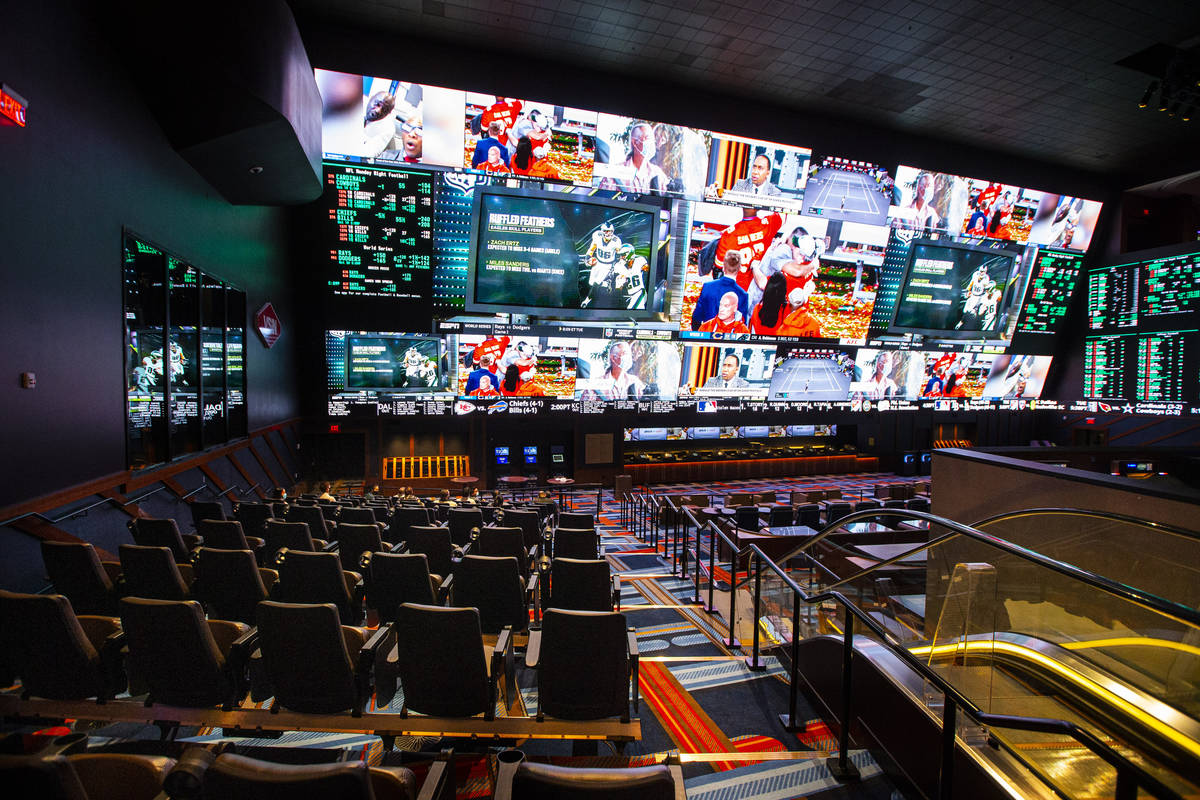 A view of the Circa Sportsbook during a tour of Circa, the first from-the-ground-up casino built in downtown Las Vegas in 40 years, on Monday, Oct. 19, 2020. (Chase Stevens/Las Vegas Review-Journal) @csstevensphoto 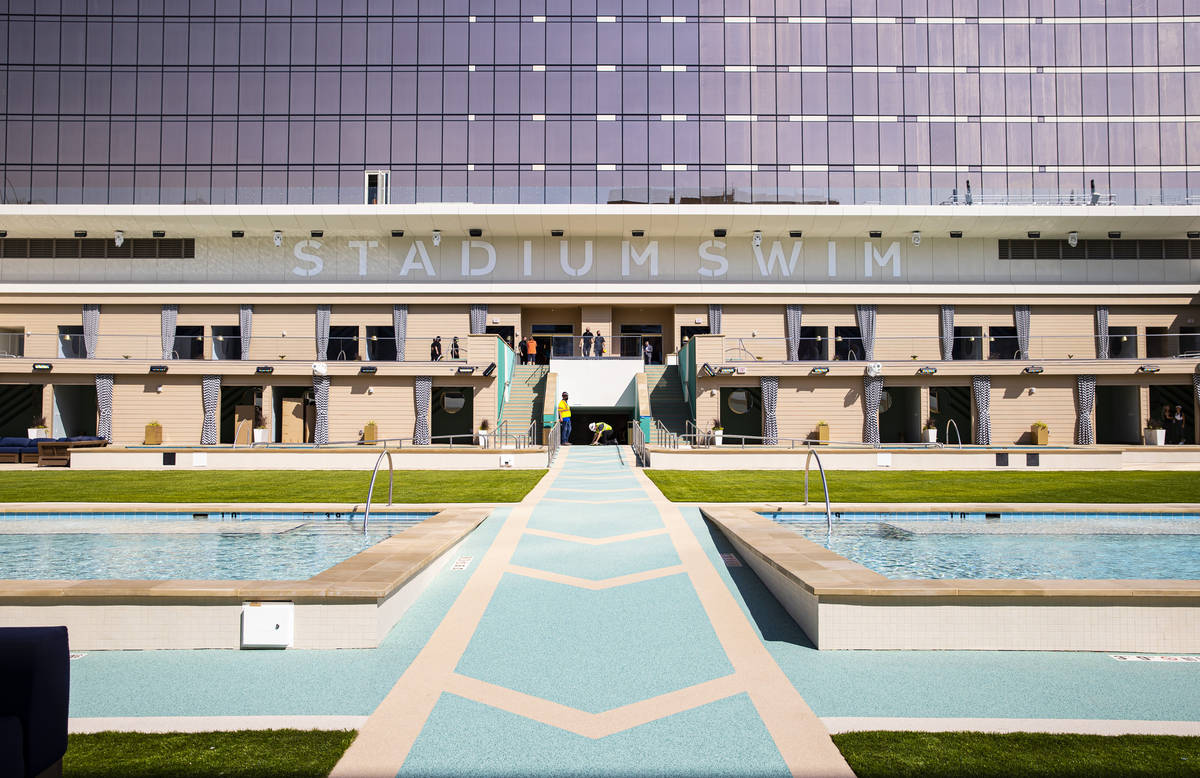 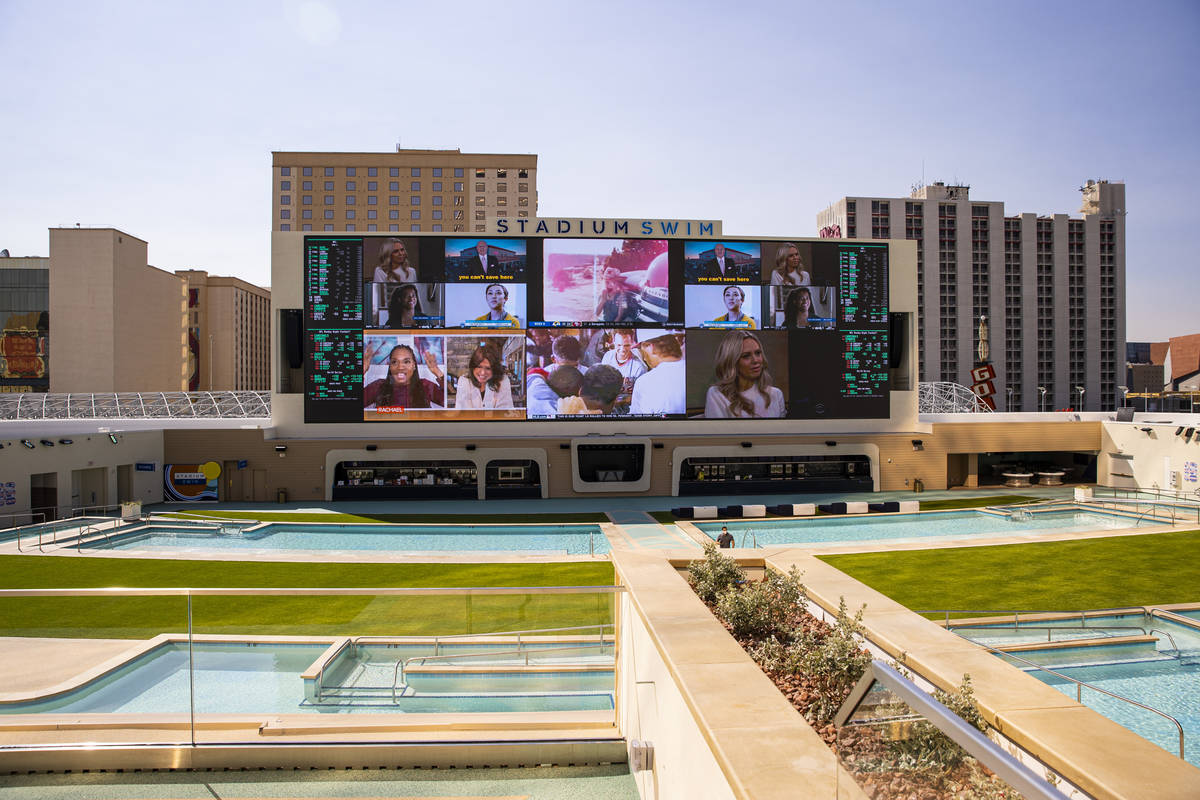 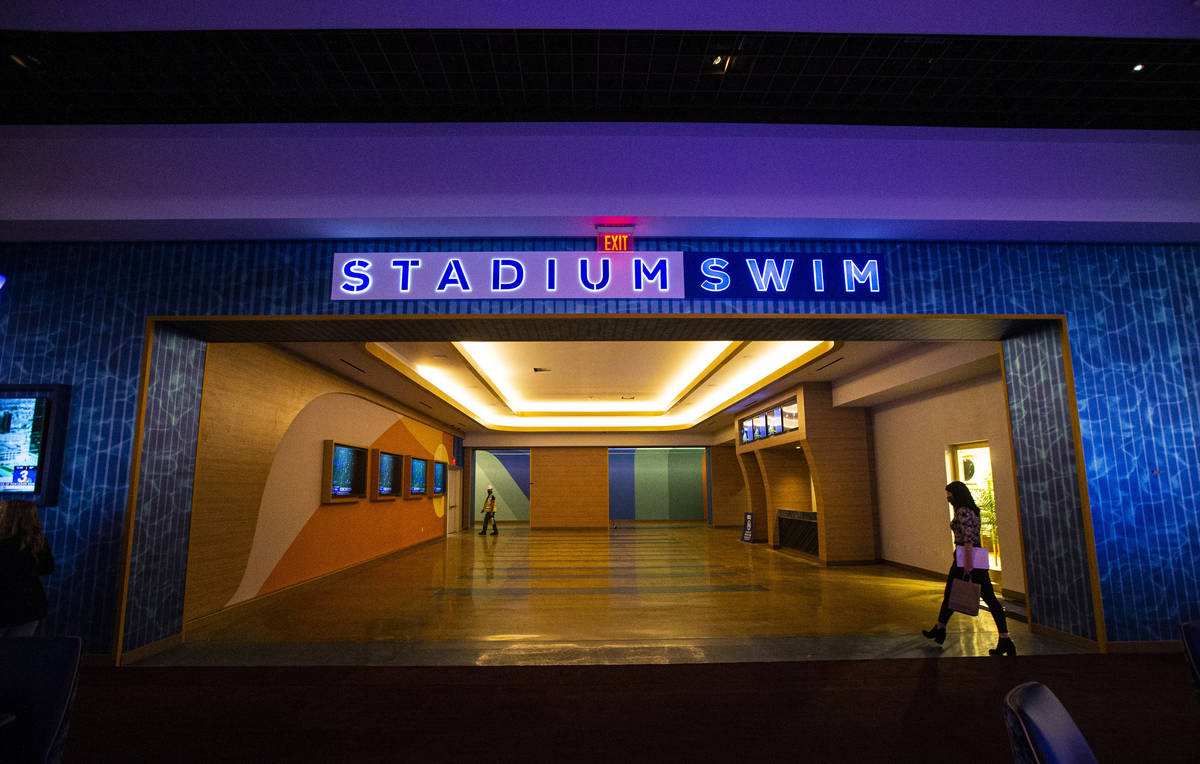 The entrance to Stadium Swim from the second-level casino floor is seen during a tour of Circa, the first from-the-ground-up casino built in downtown Las Vegas in 40 years, on Monday, Oct. 19, 2020. (Chase Stevens/Las Vegas Review-Journal) @csstevensphoto 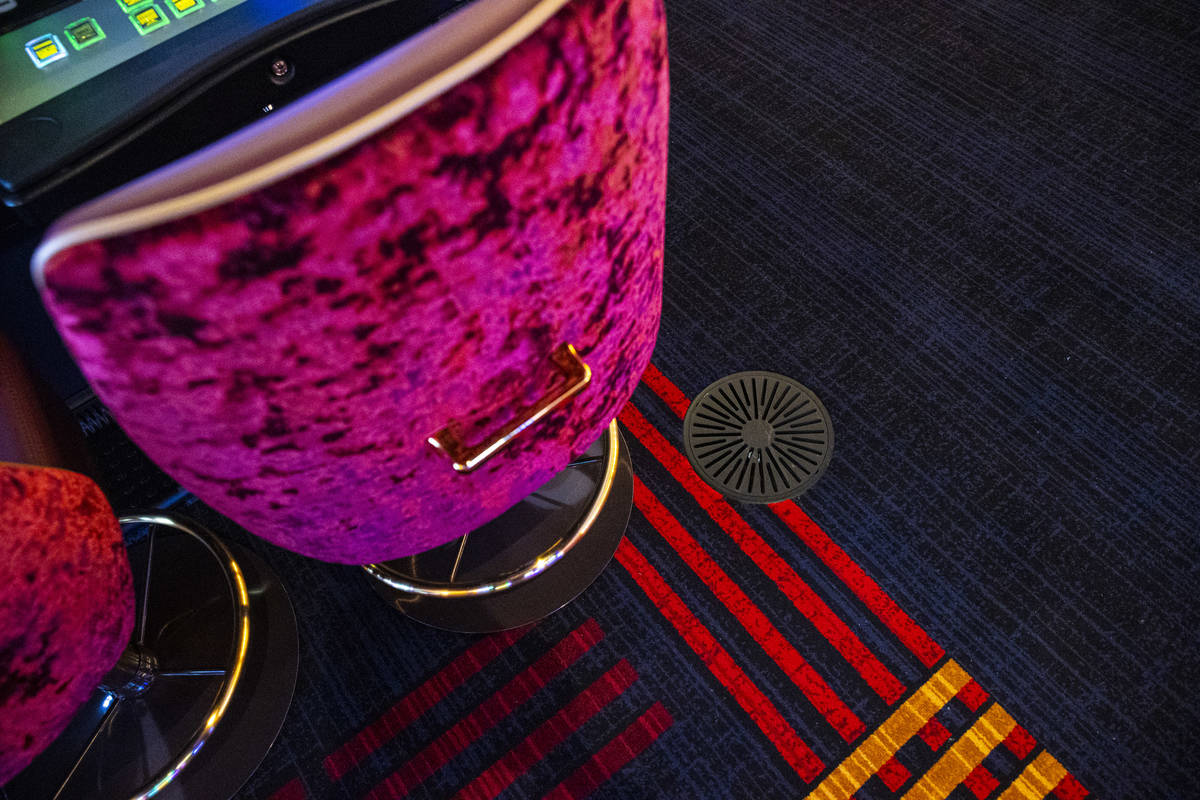 A ground air vent is seen on the casino floor carpet during a tour of Circa, the first from-the-ground-up casino built in downtown Las Vegas in 40 years, on Monday, Oct. 19, 2020. (Chase Stevens/Las Vegas Review-Journal) @csstevensphoto

Ask Derek Stevens to name his favorite piece of technology inside Circa, his new downtown resort, and he makes a grand gesture toward his “majestic beauty,” the three-story LED behemoth broadcasting 19 screens of high-definition video behind him in the sportsbook.

It’s a disorienting sight to behold, a screen so big and bright — some 78 million pixels’ worth — you may need to break out your sunglasses.

You honestly can’t miss the thing. It’s visible throughout most of the two-story casino.

But then Stevens focuses on something you probably wouldn’t notice and certainly couldn’t see.

“We work in a business where smoking is allowed and, from my perspective, encouraged,” he says. Stevens doesn’t really apologize for his smoking, but he’s also not fond of the way his habit impacts others. That smoke, especially in some of the older establishments downtown, can hang in the air like fog.

With Circa, Stevens and his brother, co-owner Greg Stevens, have flipped the traditional HVAC system upside down with all the fresh air being pumped in not from the ceilings but the floors, allowing it to rise and carry smoke and other impurities with it. Decorative circular grates emit a slow and steady flow of air. You may occasionally feel it, but it won’t create any Marilyn Monroe-style moments.

“It takes about 2 minutes and 47 seconds for the air to get from the surface of the floor up to about 7 feet,” Greg says, thus getting fresh oxygen up to and beyond the noses of almost everyone. That air will be brought in from the outside 98 percent of the time, he added. Only on the hottest and coldest days will Circa’s air recirculate.

If Derek is the public face of Circa, Greg is the nuts and bolts. The latter threw himself into the resort’s mechanics, engineering and plumbing. “Derek’s got the first floor,” Greg says. “He’s in there shakin’ hands and meeting the customers. … You’re going to find me in the basement and the roof. That’s sort of where my little hideouts are.”

The brothers look at that HVAC system as being a game changer in the casino market. It wasn’t created in response to COVID-19, they say, but they realize there’s a market for it now. The same can be said for the resort’s other clean initiative: the water in the sprawling Stadium Swim complex.

“This really evolved from all the days of going to pools,” Derek says, “and, at the end of the day, it wasn’t quite as clean-looking as when we got there.”

Health codes require hotel pools to recirculate the water every six hours. At Stadium Swim, that process is completed every hour.

The six pools constantly monitor chlorine and pH levels and can adjust accordingly, promising clean, clear water — even when that water is packed, shoulder to shoulder, with people who didn’t bother to shower before slathering themselves in sunscreen.

That’s a legitimate standard, by the way, that was factored into the bather load, Greg says. The water also is blasted with UV-C light, he adds, “and UV-C is highly toxic to any type of pathogen or bacteria or virus.”

The hotel’s mobile check-in and mobile keys, the latter of which allow guests’ phones to unlock their rooms and avoid touching a plastic card, also are likely to be appreciated more now, months into a pandemic, than when they were first proposed.

Circa leans into clean when it comes to some of its energy, as well.

The rooms and suites, which are scheduled to open Dec. 28, will be powered by digital electricity. The emerging technology moves electricity in 11-millisecond bursts to a receiver, allows the resort to run power without conduit and eliminates the need for transformers. Digital electricity is more reliable than the traditional version, Greg says, and “very, very clean.”

Circa’s elevators are dramatically more efficient than other models, both in their energy usage and the way they group guests to result in fewer trips. When they descend, Greg says, their motors work like generators to deliver energy back into the building.

The resort’s centralized refrigeration system is another piece of tech that isn’t necessarily sexy. It does, however, keep every beer in every cooler on the property between 32.5 and 33.5 degrees, even on the hottest days.

The fact that the average customer will never, ever think about this sort of thing doesn’t stop Greg from waxing poetic about it.

He acknowledges that it isn’t for everyone.

Yet his views on that refrigeration system could speak for the majority of the technology inside Circa.

“Most people don’t know what the hell it is, don’t understand it. ‘Looks really complicated,’ and (they) turn around,” he admits. “To me, it’s my baby.”